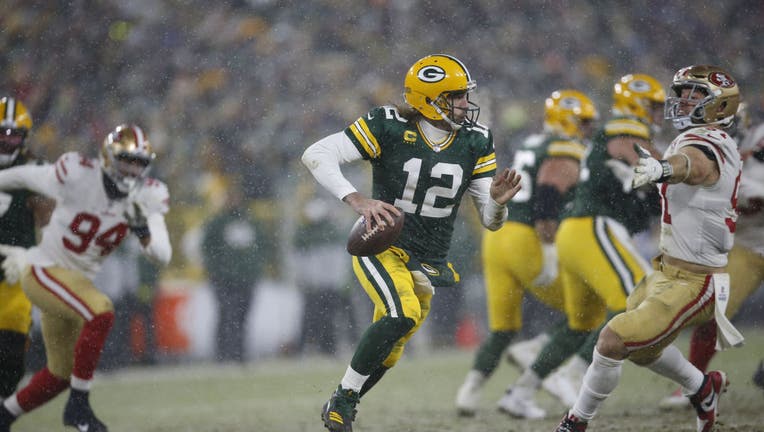 GREEN BAY, WISCONSIN - JANUARY 22: Aaron Rodgers #12 of the Green Bay Packers scrambles during the game against the San Francisco 49ers in the NFC Divisional Playoff game at Lambeau Field on January 22, 2022 in Green Bay, Wisconsin. The 49ers defeate

GREEN BAY, Wis. - Aaron Rodgers on Tuesday addressed the failures of the Green Bay Packers’ season following the team’s playoff loss at home to the San Francisco 49ers over the weekend.

Rodgers appeared in his weekly spot on "The Pat McAfee Show" and spoke at length about why he felt people were rooting against him and the Packers during the season and expanded more on his views when it comes to the coronavirus pandemic and the reaction some had to his decision to be unvaccinated against COVID-19.

"There were a ton of people tuning in, rooting against us for one reason and one reason only: it’s because of my vaccination status and them wanting to see us lose so they could pile on and enjoy and revel in the fact that my vaccination status was some sort of reason we haven’t had the success in the playoffs or whatever it might be. Some sort of correlation," Rodgers told co-hosts Pat McAfee and A.J. Hawk.

"I think to have the perspective of the entire year dealing with this and knowing that this was coming down the pipe at some point with the amount of guys that did get COVID throughout the year. I knew there was a possibility that I would have to make comments about my own personal status and possibly be in the fire from it all."

The perennial 2021 MVP candidate said he felt "empathy" for those who were caught up in a state of fear around the pandemic and blamed the media for pedaling some of that fear.

" I think as frustrating as it’s been at times, there’s been a lot of reflection to try and embrace the empathy of the situation and I think for so many people, it’s really been a hard time. From purely a financial standpoint, so many of my friends who are small business owners in Northern California and really all over the country really had a difficult time during the last couple years. And from a pure mental standpoint, I think the biggest thing that people have been dealing with is fear," he said. "There’s so much fear around this. There’s fear of your health. There’s fear of your loss of money. There’s fear of not being able to provide for your family. There’s fear of death. …

"And the media plays a big role in that. The fear porn that is put out day after day I think causes a lot of strife and stress for people and I think because I don’t watch the news, don’t subscribe to the same type of mainstream narrative at times and I’ve decided to take my own personal health, and responsibility for my health, in my hands and did my research and looked into things and my associations with other people who have done similar things, there’s anger kind of thrown my way. But the root of that, I think, is fear. So, I do have empathy for those people who are caught in this fear state around COVID that has been continually to be pushed and furthered by media and by some of the narratives that are out there and I do have empathy for that."

Rodgers said he’s mostly been isolated from the sharp criticism he received earlier in the NFL season about his vaccination status and his decision to try and get immunized to skirt the league’s COVID rules, which created a firestorm across the sports world.

"The vitriol, the hated … honestly, I’ve been isolated from that. I haven’t seen a lot of it. I know it’s out there. I’m sure it’s out there. But I do have empathy for those individuals who have been dealing with this fear. Is the hatred based on the fact that I don’t have that fear? That I’ve taken responsibility for my own health? Possibly. That I don’t fall in line with a narrative? Possibly. But I will say, I don’t believe that hatred and fear and name-calling and any of this stuff is going to get us out of this pandemic. It’s going to be love and connection and conversation and debate and information sharing. And not information sharing that’s fact-checked by the same individuals who are running the pharmaceutical industry, which is, when you look into a lot of those connections it is interesting to see some of the connections between fact-checkers and boards. And that’s too bad," he said.

He added that, at the end of the day, he hoped he inspired some people to think for themselves when it came to how to handle their health.

"I think, if anything, to sum up this long answer, I realize that I've been divisive this season by my vaccination status and my willingness to talk about it and to talk about the research that I’ve done and my own opinions and it’s part of it. I take accountability for that and I never wanted to be a divisive polarizing figure on this. I wanted to encourage people and inspire people to think for themselves. To take their health into their own hands. To realize this is a pandemic of health, not the unvaccinated. A pandemic of health. And to encourage and inspire people to take their health into their own hands and to make healthier decisions and to think about what they’re eating and what they’re putting in their body and that their health is their own responsibility as much as mine is my own responsibility.

"I hope that I’ve inspired people. I’m sorry to those who think I’m just a divisive polarizing individual but my goal has been to inspire people to take their health into their own hands. And I hope that there’s enough people, and I know there are because I’ve been hearing support from all over the country and world really throughout this time, but I hope people continue to turn off the fear and do their own research and take care of themselves and their own health and I hope that we can move past a lot of this and actually connect instead of continue to divide."

Rodgers’ future in the NFL is uncertain. He’s been adamant about not wanting to be a part of the rebuild and told the show he would want to come to a decision on his future before free agency begins in March and give the guys who may be offered franchise tags before hitting the open market, like wide receiver Davante Adams, some heads up about what he’s going to do.

"I think that should be enough time to make a decision, by then. I don’t want to put myself on a specific date, but again, I do want to be sensitive to Davante and many other guys who have decisions to make on their own futures. To drag it out past free agency would be disrespectful to the organization and to those guys, and that 100% will not happen," he said.

Firefighters on Tuesday, Jan. 25 responded to the scene of a shed fire in Washington County.

Kenosha police rescued a 68-year-old man who slipped off a pier and fell into the lake while fishing. The dramatic body camera video shows the man was able to stay afloat for about 20 minutes, screaming for help.