Jerseys For Jackson: People wear their favorite jersey in memoriam

The power of social media fueled a nationwide campaign in memory of a Waukesha parade attack victim Friday, Dec. 3.

Aaron Rodgers was spotted outside a Los Angeles doctor’s office walking with a renowned orthopedics and sports medicine physician Friday with the Green Bay Packers on a bye this week.

Rodgers was seen walking with Dr. Neal S. ElAttrache in the parking lot outside the offices of Kerlan-Jobe orthopedics. ElAttrache is a specialist in sports medicine as well as shoulder, elbow and knee injuries. He’s the chairman of the Kerlan-Jobe Orthopaedic Foundation and the head team physician for the Los Angeles Dodgers and Los Angeles Rams, according to his personal website.

It’s unclear exactly what Rodgers was seeing the doctor about, but he has been dealing with a toe injury he suffered last month when he was isolating after testing positive for COVID-19. He said he fractured his toe and later dispelled rumors he was dealing with so-called "COVID toe." 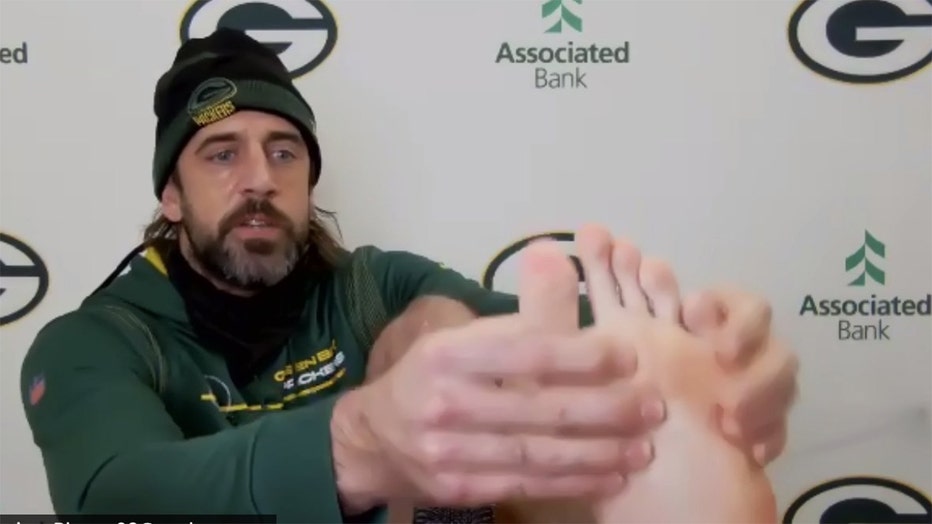 Aaron Rodgers shows his foot while discussing a toe injury with media via Zoom on Wednesday, Nov. 24, 2021.

"The injury I suffered when I was in quarantine doing my own workouts and trying to ramp up my conditioning," he told "The Pat McAfee Show" in November. "Didn’t think it was what it was until I go to the facility on Saturday before the game and got X-rayed when I got cleared and got back into the facility.

"So it’s just about pain management. There’s surgical options as well that wouldn’t involve missing time. So, thankfully, we’ve got a great foot guy in town [Dr. Robert Anderson] — the best in the business who everybody sends stuff to. But I’ll definitely look at all options over the bye week and decide what would be best to make sure I get to the finish line."

Earlier this week, Rodgers’ drama over his vaccination status was back in the spotlight after the NFL suspended Tampa Bay Buccaneers players Antonio Brown and Mike Edwards and free agent John Franklin III after they misrepresented their COVID-19 vaccination status to the league.

Many wondered why Rodgers was only fined for his ordeal.

Rodgers played with wording about his vaccination status when he talked to reporters and eventually said on "The Pat McAfee Show" he was working with the league to try and avoid being labeled as an unvaccinated player by doing certain homeopathic treatments. The NFL determined the treatments didn’t suffice and he was labeled as unvaccinated.

The NFL and the Packers knew he wasn’t vaccinated.

Brown and Edwards were a part of a Bucs team that touted its 100% vaccination status until last month when an investigation was launched following a bombshell Tampa Bay Times’ report.

Packers' Aaron Rodgers on toe injury: 'I'm going to push through this'