"There’s a lot of guys’ futures that are uncertain, myself included," Rodgers said, managing a slight laugh as if to momentarily soften this harsh reality in the immediate aftermath of the loss to the Tampa Bay Buccaneers in the NFC championship game. "That's what sad about it most."

The 37-year-old produced by most measures in 2020 the finest performance of his brilliant career, making him a leading contender for a third NFL MVP award. 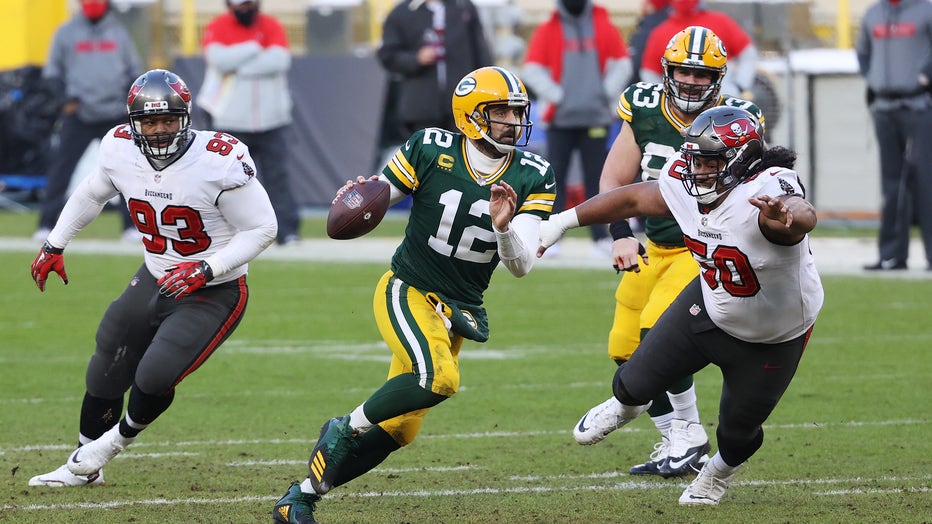 Aaron Rodgers #12 of the Green Bay Packers scrambles in the third quarter against the defense of Vita Vea #50 and Ndamukong Suh #93 of the Tampa Bay Buccaneers during the NFC Championship game at Lambeau Field on Jan. 24, 2021 in Green Bay, Wisconsin

The Packers went 13-3 for the top seed in the NFC, cruising past the Los Angeles Rams in the divisional round and finally giving Rodgers a home game to play for a spot in the Super Bowl. His other four shots at it as the starter, including the win at Chicago (2010 season) that preceded his only championship, were on the road. They lost in the semifinals at San Francisco (2019), Atlanta (2016) and Seattle (2014).

Ten years and counting since the Packers won it all with Rodgers, this 31-26 loss to Brady and the Bucs will sting for awhile. Especially considering what happened last spring, when Green Bay drafted quarterback Jordan Love in the first round. Rodgers is signed through 2023, but that sure doesn't guarantee in this league that he'll stay that long — or that he'd want to.

"I’m going to have to take some time away for sure and clear my head and just kind of see what’s going on with everything, but it’s pretty tough right now," Rodgers said. He later added: "It’s a grind to get to this point, and that makes the finality of it all kind of hit you like a ton of bricks." 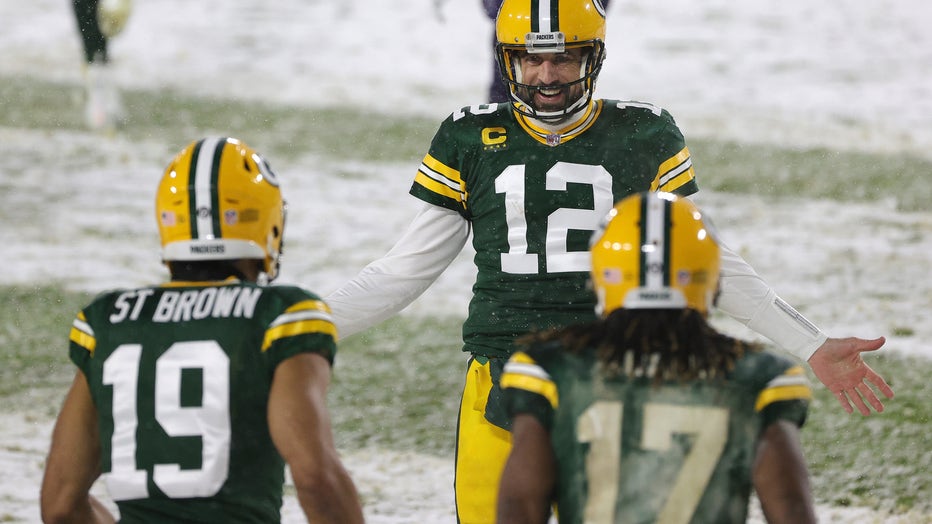 Quarterback Aaron Rodgers #12 of the Green Bay Packers celebrates a touchdown pass to Equanimeous St. Brown #19 against the Tennessee Titans during the second quarter at Lambeau Field on Dec. 27, 2020 in Green Bay, Wisconsin. (Photo by Stacy Revere/G

Rodgers went 33 for 48 for 346 yards and three touchdowns, but this wasn't exactly his best. He had one interception that Tampa Bay used to set up a last-second touchdown before halftime and completed only two of nine attempts on goal-to-go situations. He also took five sacks.

Both of his goal-to-go completions went for scores, though, and coach Matt LaFleur twice took away a fourth-down chance to finish a drive in the end zone by settling for short field goals.

The fourth-and-8 decision with an eight-point deficit and 2:09 left — after Rodgers left the pocket and threw an incompletion to Davante Adams, eschewing the alternative of running for the pylon — was the surprisingly safe choice that Packers fans will have to chew on for years. Rodgers didn't agree with it, though he used his words carefully.

"I understand the thinking, above two minutes with all of our timeouts, but it wasn’t my decision," Rodgers said. 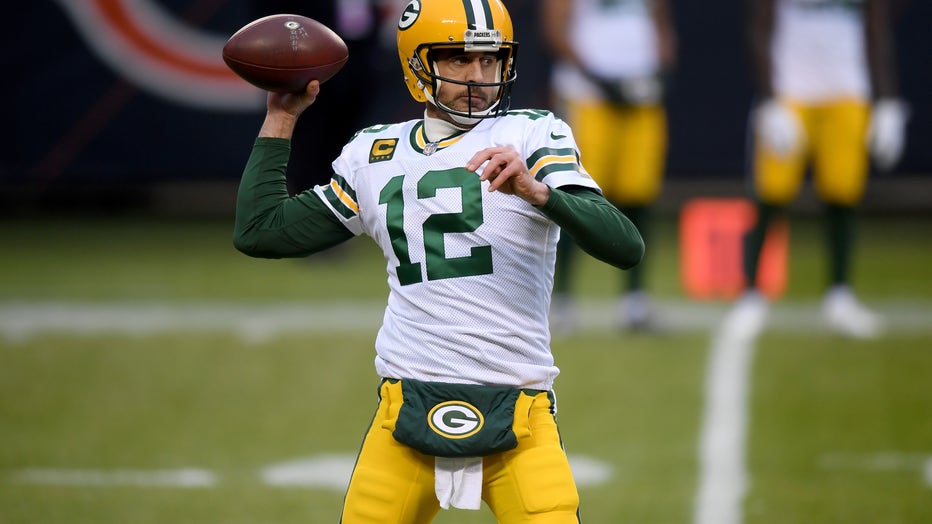 Aaron Rodgers #12 of the Green Bay Packers warms up prior to the game against the Chicago Bears at Soldier Field on Jan. 3, 2021 in Chicago, Illinois. (Photo by Quinn Harris/Getty Images)

He was frustrated, of course, by the consecutive three-and-outs in the fourth quarter after the defense came up with interceptions No. 2 and No. 3 of Brady. He was mad about the pass interference call on Kevin King that allowed the Bucs to extend their drive with 1:41 left and salt the game away.

Mostly, though, Rodgers sounded sad about what he won't get to do anymore this season — play with a Packers team that he enjoyed as much as any of his career.

There's no telling that Love would actually be ready, if the conclusion were to be reached, mutually or not, that the Rodgers era in Green Bay has ended. Throughout his video news conference with reporters from the basement of Lambeau Field, however, Rodgers sure sounded a lot like a guy saying goodbye.

Will he be back in green and gold?

"I certainly hope so," LaFleur said. "The guy is the MVP of this league. He’s the heart and soul of this football team. Hell yeah, he better be back here. He’s our leader. Just so appreciative of him buying into what we’re trying to get done around here and believing in that group. I feel for him to be in this situation and for us not to get it done. It hurts."