Fulton County Superior Court Judge Ural Glanville went through legal waivers with Jeffery Williams, better known by his stage name Young Thug. Williams said he understood his case had been re-indicted and he spoke with his attorneys about the new indictment.

ATLANTA - Jeffery Williams, better known by his stage name Young Thug, appeared in court with several others who were re-indicted on additional charges into a street gang investigation in Fulton County.

An attorney for Williams objected to a portion of the indictment on the basis of a speedy trial motion he filed in a prior hearing.

Glanville went through legal waivers with Williams, ensuring he understood his case had been re-indicted. Williams said he spoke with his attorneys about the new indictment.

A prosecutor asked Williams to swear the statements he made in court on Thursday were truthful. 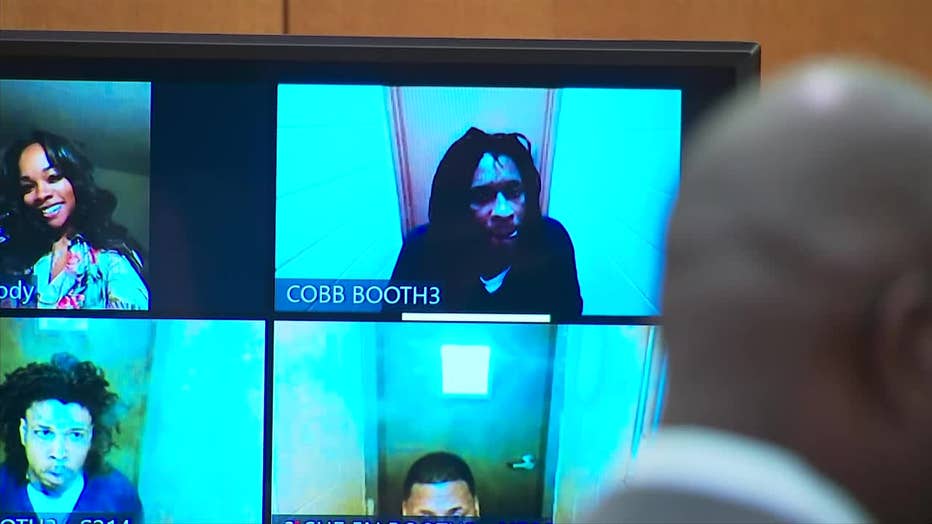 Jeffery Williams, better known by his stage name Young Thug, appeared in court with several others who were re-indicted on additional charges into a street gang investigation in Fulton County.

Williams or Young Thug is in the Cobb County Detention Center.

A judge denied bond for other suspects and heard several motions filed by the state on Thursday.

Christian Eppinger, an alleged gang member accused of shooting an Atlanta police officer and other crimes in the indictments, will have another hearing on Sept. 8 due to an issue with his previous attorney.

Prosecutors say Young Thug, the founder of Young Stoner Life Records, is also a leader of the alleged street gang, YSL. The indictment gives a detailed account of various violent crimes alleged members of YSL are accused of, and documents social media posts and rap lyrics by Williams that reference YSL. Months after the initial indictment, investigators charged Williams with illegally possessing multiple firearms, including a modified machine gun, in addition to street gang activity and drug trafficking.

Should music lyrics by Young Thug, Gunna, or other artists be used in court?

Should an artist’s lyrics be used against them in federal criminal cases? One lawmaker says no. Rep. Hank Johnson, D-Georgia, recently introduced a new bill known as the "RAP Act." This as Atlanta rapper Young Thug faces accusations he co-founded a street gang tied to multiple murders.

The 31-year-old rapper, whose legal name is Jeffery Lamar Williams, and 27 other people, were indicted along with fellow Atlanta rapper Gunna in May using Georgia’s RICO Act. The 88-page indictment claims they are part of the Young Slime Life, or YSL, a subset of the Bloods street gang. Prosecutors allege those named in the indictment have engaged in violent criminal activity in the city since 2012.

Young Thug, Martinez Arnold (also known as Duke), and Deamonte Kendrick (also known as Yak Gotti) are accused of possessing and attempting to sell marijuana and cocaine in May 2022. The indictment says they were possessing multiple guns: a GLOCK 357, a FN firearm, a GLOCK 19, a Smith & Wesson M&P, and a GLOCK 45 with a "converter switch and extended magazine." The GLOCK 45 modified into a machine gun resulted in another gun possession charge.

The total list of charges against 28 accused is up to 65 counts. The re-indictment accused three additional people — Deamonte Kendrick, also known as Yak Gotti; Shannon Stillwell, AKA Shannon Jackson or SB; and Quamarvious Nichols, AKA Qua — of separate gun charges.

In June, a judge denied bond and an elaborate house arrest plan. Several factors were taken into consideration including a threat introduced to the court attributed to Williams from 2015 that states "Anybody goes into courtroom and tells the god's honest truth, they'll be f---ing killed." The judge said the validity of that threat would need to be proven in court, but it speaks to his possibly being a danger to the community.

Gunna, whose name is Sergio Kitchens, had his bond denied in May.

A judge set his court date for January 2023.

What is the Racketeer Influenced and Corrupt Organizations (RICO) Act?

The Racketeer Influenced and Corrupt Organizations Act, or RICO, was developed to fight organized crime. It was enacted in 1970 after being signed into law by President Richard Nixon.

Georgia’s RICO statutes are similar to the federal version but are much broader in that the criminal "enterprise" does not have to be around as long. Georgia is one of only 33 states that have its own RICO statutes. However, in both state and federal laws, a pattern of criminal enterprise has to be established.