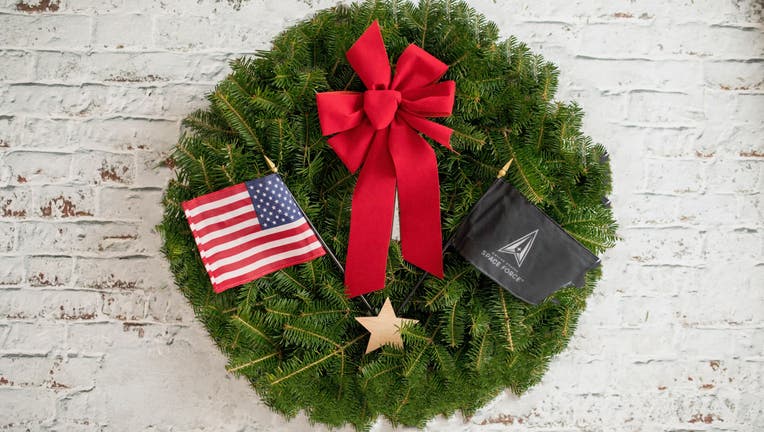 This is the eighth ceremonial wreath with a corresponding service flag to be provided by WAA.

The ceremonial wreaths represent each branch of the service, and POW/MIA, and are encouraged to be on display as part of each National Wreaths Across America Day ceremony held.

"The U.S. Space Force traces its roots to the beginning of the Cold War, with the first Army Air Forces space programs starting in 1945, and the first major employment of space forces culminated in the Gulf War, where they proved so critical to the U.S.-led coalition," Joe Reagan, U.S. Army Veteran and Director of Military & Veteran Outreach, Wreaths Across America, said in a news release.

US Space Force unveils its flag

It’s the first official flag of a new U.S. military service to be unveiled in 72 years.

"As an organization whose mission is to Remember the fallen, Honor those that serve and Teach the next generation the value of freedom, it is imperative that we recognize all those who have stepped up to serve as Guardians and continue to protect those Freedoms all Americans enjoy," he continued.

The U.S. Space Force was established on December 20, 2019, after the enactment of the Fiscal Year 2020 National Defense Authorization Act. It is the first new military service since the Army Air Forces were reorganized as the U.S. Air Force in 1947.

The force aims to protect U.S. and allied interests in space.

WAA was formed as a nonprofit in 2007, providing "handmade balsam veterans’ wreaths – each with a corresponding service branch flag, including a POW/MIA flag – to each registered participating location." The group is most notable for laying wreaths at Arlington National Cemetery.

This year, more than 2,700 participating locations are registered to take part in National Wreaths Across America Day.