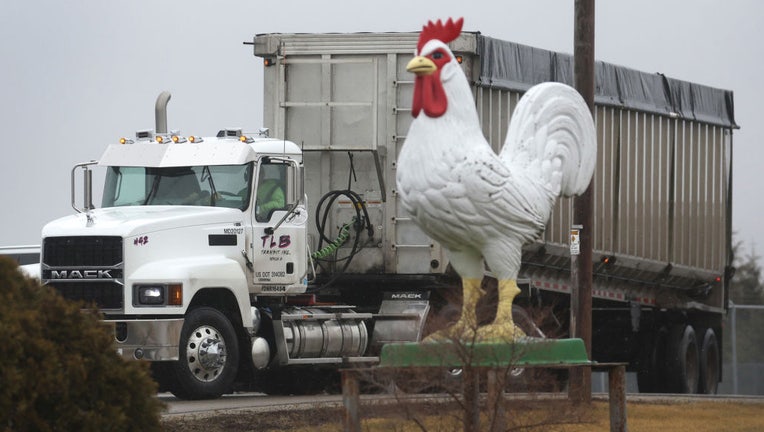 PALMYRA, WISCONSIN - MARCH 24: A truck drives out the entrance of the Cold Springs Eggs Farm where the presence of avian influenza was reported to be discovered, forcing the commercial egg producer to destroy nearly 3 million chickens on March 24, 20

MADISON, Wis. - The Wisconsin Department of Agriculture, Trade and Consumer Protection (DATCP) is suspending all poultry shows, exhibitions and swap meets statewide through May 31. It is an effort to prevent the spread of highly pathogenic avian influenza (HPAI).

DATCP had already suspended poultry exhibitions in Jefferson County after a commercial farm was confirmed with HPAI.

A news release says poultry owners and those working with poultry are strongly encouraged to continue practicing strict biosecurity to protect their flocks. When possible, poultry owners are asked to keep their flocks indoors to prevent contact with wild birds.

Signs of HPAI in infected birds include:

To report increased mortality or signs of illness among domestic birds, you are urged to contact DATCP at 608-224-4872 (business hours) or 800-943-0003 (after hours and weekend). Reports also can be emailed to datcpanimalimports@wisconsin.gov.

Minnesota, Iowa, Illinois, and North Carolina are just some of the states that have implemented similar restrictions on poultry events.