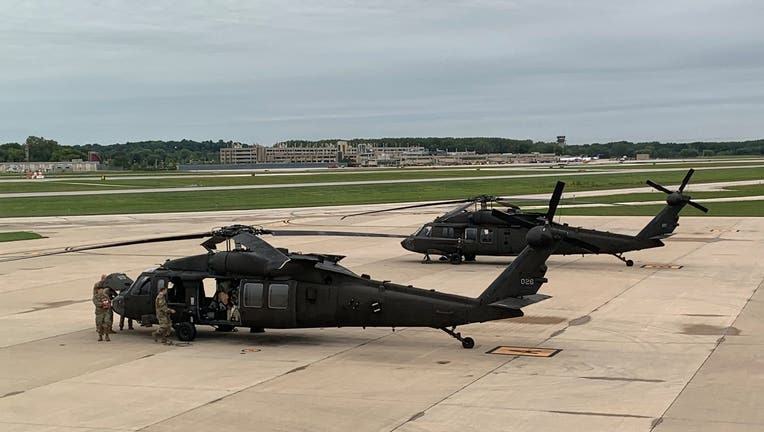 The aircraft, along with crews and maintenance personnel from Soldiers assigned to guard aviation facilities in West Bend and Madison, are supporting California and Washington through an Emergency Management Assistance Compact – or EMAC – request from each state.

One helicopter and six personnel from several units assigned to West Bend’s Army Aviation Support Facility No. 2 will support Washington with medevac support, while two aircraft and 17 personnel from Madison’s 1st Battalion, 147th Aviation will assist the California Department of Forestry and Fire Protection (CALFire) with general aviation support and are prepared to employ water buckets to battle fires.

"The mission to California is to support CALFire wildland firefighting," said Lt. Col. Dan Allen, commander of the Wisconsin Army National Guard’s 1st Battalion, 147th Aviation in Madison.  "The aircraft will utilize Bambi Buckets capable of carrying up to 660 gallons of water and dropping water where needed."

Crews from the 147th Aviation supported CALFire in September and October 2020 in a similar mission, and the unit trains regularly on wildfire support operations.

"Our crews train on fire bucket operations each spring to prepare for any Wisconsin firefighting requirements," Allen said. "This training includes preparing equipment, the actual deployment and dropping of water, and training with the Wisconsin Department of Natural Resources."

Crew members will conduct additional mission-specific training once they arrive in California.

EMAC is a mutual aid agreement that allows state-to-state assistance during declared states of emergency, and it allows other states to provide resources such as National Guard troops and equipment to the requesting state. The troops deploying to California and Washington are doing so in a State Active Duty status.

One crew departed West Bend on Tuesday for Washington while the two crews destined for California left Madison Friday.

Firefighters on Thursday night, Aug. 12 responded to the scene of a house fire ok Oak Park Court near Main Street in Milwaukee.