Barnes, 34, is the first Black lieutenant governor in Wisconsin history. He is giving up a chance to run for a second term in 2022 as Gov. Tony Evers' running mate. Instead, Barnes becomes the seventh Democrat to enter the race, with an eighth expected to get in soon.

Barnes, in his launch video, is shown running through the streets of Milwaukee. He speaks about backing family-supporting jobs, improving health care, addressing climate change and protecting democracy and the right to vote.

"I’m running for the United States Senate because when things get tough, we shouldn’t lower our expectations," Barnes said in a statement. "Instead of changing our dreams, we need to change the game. Hard-working Wisconsin families deserve every opportunity, but politicians like Senator Ron Johnson aren’t delivering."

Johnson has not said yet whether he will seek a third term, but through June he had raised more money than any of the Democratic candidates at that point. Johnson's spokeswoman did not immediately return a message seeking comment.

Barnes brings some name recognition to the Democratic field that includes other current office holders, political newcomers, a doctor and an executive with the Milwaukee Bucks.

Barnes for years has said the Democratic Party must do a better job connecting with young people and people of color. He played up his middle class upbringing in his announcement, saying he has dedicated his career to "leveling the playing field for everyday people in Wisconsin."

"Growing up, my father worked on an assembly line for 30 years, my mother taught in Milwaukee public schools," Barnes said. "They were able to provide me with a foundation for opportunity. I believe we need to build a better America where the opportunity I found isn’t so rare."

Barnes won the Democratic primary for lieutenant governor in a blowout in 2018 and was then paired with Evers. They went on to defeat then-Gov. Scott Walker and Lt. Gov. Rebecca Kleefisch. She is expected to run for governor against Evers next year.

Barnes was outspoken in the 2018 campaign, accusing Walker of ignoring "people who look like me" and saying then-President Donald Trump wanted to create "a superior race." 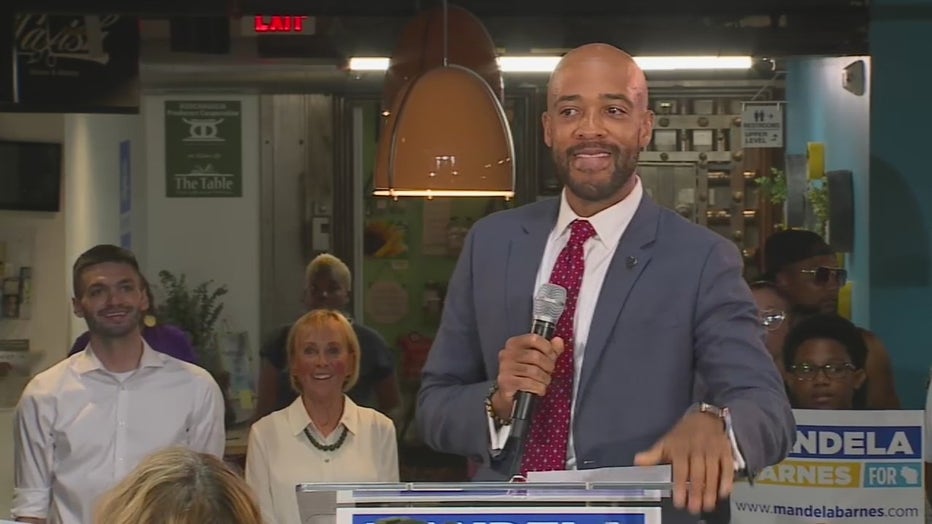 Barnes also was outspoken following the Kenosha police shooting last summer of Jacob Blake, a Black man. Barnes criticized Trump for visiting the city amid protests after the shooting. And Barnes was critical of how police reacted to Kyle Rittenhouse, a white teenager who shot and killed two protesters during a violent night of protests.

The job of lieutenant governor has few official duties. Evers tapped Barnes to lead the governor's task force on climate change, releasing a report in December that included 55 policy recommendations. He has also advocated for tighter gun control laws and redistricting reform, issues that Evers has championed as governor.

Barnes quietly received his college diploma from Alabama A&M University in May 2020, 12 years after he attended classes there and two years after he said he had a degree even though he had not yet fulfilled all the requirements to get one.

Prior to being elected lieutenant governor, Barnes served four years in the state Assembly from 2013 to 2017, first elected at age 25. Rather than seek a third term in 2016, he ran for the state Senate against Democratic incumbent Sen. Lena Taylor and lost in the primary.

Barnes’ decision to join the Senate race opens the field for lieutenant governor. Evers does not get to choose a running mate. Instead, whoever wins the August 2022 primary will be his running mate.

Evers, in a statement, praised Barnes as a "good friend" and "great partner," but stopped short of endorsing him. Evers said Democrats were lucky to have strong candidates to take on Johnson and "send him packing."

Steven Olikara, founder of the Millennial Action Project, has formed an exploratory committee and is expected to join the race soon.

"Whether it’s lying about his college degree, his temper tantrums when being asked to explain his unpaid taxes, or his delinquent fines, ‘Make-it-up Mandela’ Barnes has neither the maturity nor the temperament to represent Wisconsin in the U.S. Senate."

"Mandela Barnes is a good friend and has been a great partner working to address challenges facing our state, and I’ve always said I would support any decision Mandela made about how best to serve the people of Wisconsin.

"At the end of the day, Wisconsin deserves better than someone like Ron Johnson, who’s chosen to embrace reckless conspiracies that have risked public health and jeopardized our state’s economic recovery. We’re lucky to have strong Democratic candidates who are running to send him packing, and I look forward to supporting Wisconsin Democrats’ choice to take on Ron Johnson in 2022."

"Whether it's lying about when he received his college degree or misleading the public on in-person voting, Wisconsinites know Mandela Barnes is just another empty suit who will gladly step on their families as he attempts to climb the political ladder."

The Milwaukee Health Department will bring COVID-19 vaccines to the plaza at Fiserv Forum on Tuesday, July 20 from 6 p.m. to 7:45 p.m.