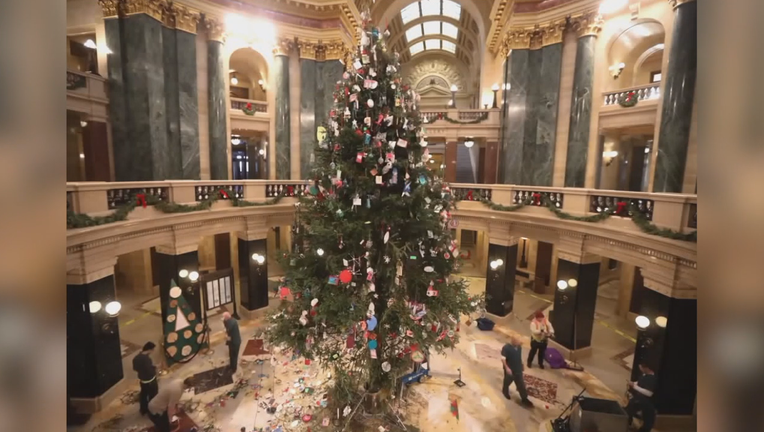 Holiday tree in the state Capitol rotunda in Madison, Wisconsin.

MADISON, Wis. (AP) - Two Republican state lawmakers on Tuesday put up an artificial Christmas tree in the Wisconsin Capitol's rotunda for a second time, hours after the first one was removed because they did not have a permit for the display.

Reps. Paul Tittl and Shae Sortwell broadcast their reinstallation and decorating of the tree live on Facebook, calling it a peaceful protest allowed under the First Amendment in defiance of Democrat Gov. Tony Evers' administration. Evers chose not to erect a holiday tree in the rotunda this year because the Capitol building is closed to the public due to the coronavirus pandemic.

The lawmakers first put the tree up on Dec. 1 after Evers said the typical towering real tree would not be displayed this year. That tree, donated from a Wisconsin resident and decorated with ornaments made by school children from around the state, is typically a big attraction over the holiday season.

Republicans have bristled at Evers’ decision to refer to it as a holiday tree rather than a Christmas tree. Tittl and Sortwell said they really wanted to have a Christmas tree in the rotunda even though the governor was against it.

“It doesn’t hurt anything,” Tittl said in an interview. “It’s not using any resources. It doesn’t have to be watered. Kids from all over the country have sent us ornaments to put on the tree.”

He said children who sent them ornaments were “responding to the spirit of Christmas.”

Their first request to put up a “historical display” was denied by Evers' administration. The lawmakers appealed. Capitol Police Chief David Erwin denied the appeal in a Thursday email. The primary reason the permit was denied, Erwin said, is that that the Department of Administration does not have the authority to approve displays on the ground floor of the Capitol. That authority rests with the State Capitol and Executive Residence Board, he said.

“These long-standing and consistent permitting rules have been used for over 40 years to ensure a fair and equitable process for freedom of speech exercises in the Capitol, regardless of an individual’s political leaning,” DOA Assistant Deputy Secretary Olivia Hwang wrote the lawmakers on Tuesday, informing them the tree had been removed.

She suggested the lawmakers contact their GOP colleague, Rep. Amy Loudenbeck, who chairs the board that approves ground floor displays in the Capitol. Loudenbeck herself has applied for and received a permit to erect an artificial Christmas tree on the first floor of the Capitol, Hwong said.

Tittl said they have now applied for a permit with the board Loudenbeck heads as well as with the Evers administration for a second time.

A spokeswoman for the state Department of Administration, which considers applications for displays in the Capitol, did not immediately respond to questions about whether the second tree would be removed.

Erwin suggested the tree be moved to the first floor of the Capitol, where the DOA could grant approval and where several other religious displays are put up this time of year when the building is open. But Tittl said he didn't want to do that because not as many people would see it there and traditionally there has been a tree on the ground level.

A classic movie is being reimagined as a staged radio play to bring cheer and art at a time when we need it most.

Two Republican lawmakers put up a Christmas tree in the Wisconsin Capitol rotunda despite being told they weren't allowed to do so.