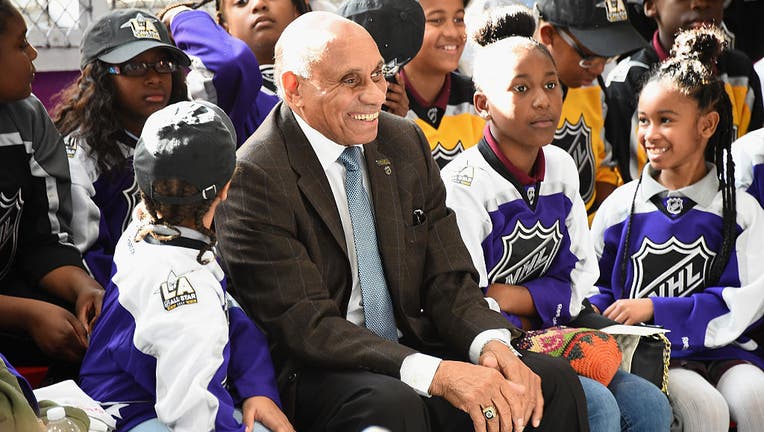 Willie O’Ree, the first Black player to appear in an NHL game, will be receiving a Congressional Gold Medal.

President Joe Biden signed the bill Monday, saying O’Ree will receive the award "in recognition of his extraordinary contributions and commitment to hockey, inclusion, and recreational opportunity."

The honor for O’Ree comes one day before the start of Black History Month, an annual celebration honoring achievements by Black Americans. Sixty-four years ago, O’Ree became the first Black player to play in the NHL and has since worked for several decades as a diversity ambassador to the league.

He suited up on Jan. 18, 1958 as a Boston Bruin to play against the Montreal Canadiens.

O’Ree played two games for the Bruins during the 1957-58 season, spent the next two seasons in the minor leagues, and came back to Boston for 43 more during the 1960-61 season, notching four goals and 10 assists over his 45 total games.

He did it all despite being 95% blind in his right eye.

"I told myself, ‘Willie, forget about what you can’t see and focus on what you can see,’" he said.

He was traded to the Canadiens in 1961 but never made it back to the NHL level. He continued to play in the minors before retiring in 1979.

He was inducted into the Hockey Hall of Fame in 2018, and, earlier this month, his No. 22 jersey was retired in Boston.

The backstory of Black History Month

The annual celebration, which highlights the achievements of African Americans, evolved out of Negro History Week, the brainchild of historian Carter G. Woodson.

RELATED: Black History Month: When and how it got started

Meanwhile, O’Ree has focused on the future of the league following his retirement. Since 1998, he has worked for the NHL as a diversity ambassador, trying to foster more inclusion and combat the racism that still exists in the league.

O’Ree previously said that while he felt embraced by his teammates in Boston, his short time in the NHL wasn’t untouched by the racism that permeated the Jim Crow era in the U.S. at that time.

"When I broke in with the Bruins in 1958, I heard the racial remarks and the racial slurs from fans in the stands and players on the opposition," O’Ree said. "But it didn’t really bother me. And I have to thank my older brother, who was not only my brother and my friend, but he was my mentor and taught me a lot that I would need to know. He says, ’Willie. If people can accept you for the individual that you are, this is. That’s their problem. Just go out and work hard and stay focused on what you what you want to do.′ And basically, that’s what I did."

O’Ree said he’s proud of the work he’s done speaking with young people at hockey clinics in the hopes of diversifying the sport he loves.

"I just want to be remembered as not only as the first Black player to play in the NHL, but just an individual that wanted to be involved with boys and girls and help them set goals for themselves and help them work toward their goals and feel good about themselves and like themselves," he said. "I think that’s very important."