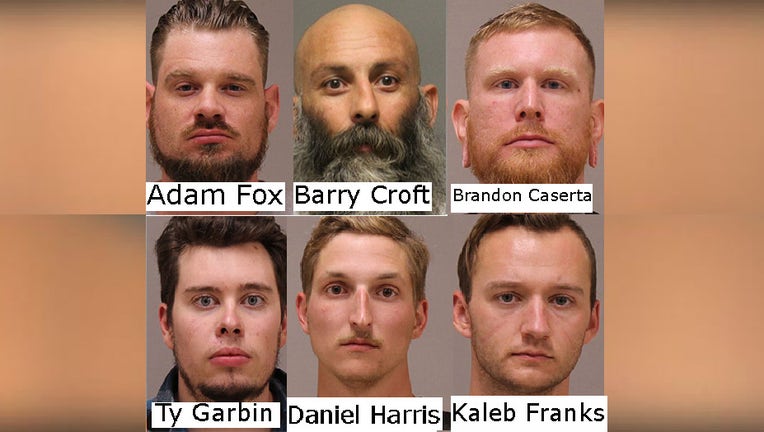 GRAND RAPIDS, Mich - After questions about guns, politics and COVID-19, a jury was selected Tuesday for the second trial of two men charged with conspiring to kidnap Michigan Gov. Gretchen Whitmer over their disgust with restrictions early in the pandemic.

The judge and lawyers settled on 18 people, including six alternates, to hear the case against Adam Fox and Barry Croft Jr.

They're on trial again after a jury in April couldn't reach a verdict. Two co-defendants were acquitted and two more pleaded guilty earlier.

"It's not disqualifying to have views one way or the other," he said. "It's disqualifying if the views become more important than what the law or the evidence is."

The plot to kidnap the Democratic governor followed training in Wisconsin and Michigan and two trips to scout her second home in northern Michigan, according to evidence in the first trial.

Fox, 39, lived in the Grand Rapids area and Croft, 46, is from Bear, Delaware. They regularly communicated with other extremists who were angry with Whitmer and various public officials, evidence showed.

Some people were dismissed for health reasons or for political views they couldn't set aside. One man, whose mother is an elected county clerk, was scratched after he said he has no tolerance for violence linked to politics.

"I don’t think you would want me on the jury," he told Fox's lawyer.

The jury will hear secretly recorded conversations and see text messages and social media posts favoring violence. Defense attorneys, however, will hammer away at the credibility of undercover FBI agents and informants who fooled the group into thinking they were allies.

Lawyers for Fox and Croft will argue they were shielded by the First Amendment and entrapped by the government every step of the way.

Daniel Harris and Brandon Caserta were found not guilty at the first trial. Ty Garbin and Kaleb Franks earlier pleaded guilty and will testify again against Fox and Croft.

Garbin told jurors at the first trial that the goal was to cause national chaos with a kidnapping close to the election between Joe Biden and then-President Donald Trump.

Whitmer, who will not be called as a trial witness, disclosed Monday night that she tested positive for COVID-19 for the first time and was experiencing mild symptoms. In a recent interview, she said she believes she was the target of an "assassination plot," not just a kidnapping.

"No one talks about it that way," Whitmer told The Washington Post.