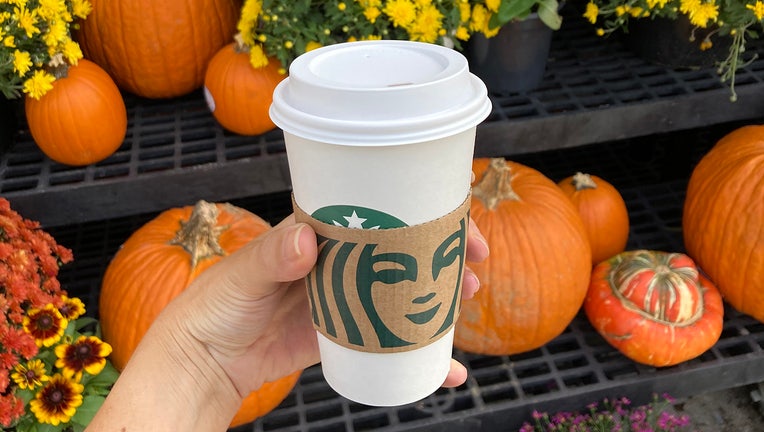 File: A Pumpkin Spice Latte, purchased at a Starbucks in Baltimore. Researchers say the appeal of pumpkin spice-flavored items is less about the taste than the smell and its associations. (Christina Tkacik/Baltimore Sun/Tribune News Service via Getty

It's a day autumn, and coffee, lovers circle on their calendar -- though that circle seems to keep moving earlier on the chart -- the day Pumpkin Spice Lattes are unveiled from Starbucks and other national coffee chains.

It's supposed to be a tasty rite of fall, signaling those cool, crisp mornings and pleasant afternoons are just around the corner. But with the launch date coming earlier and earlier in recent years, it has rankled the summer fans who want to cling to their hot summer days as long as they can and don't want any reminders that those days are nearing their end.

But just *how* early is too early? In the mid-2010s, Starbucks had generally released their "PSL" drinks during the first week in September -- still before autumn officially begins, but inside "Meteorological Autumn", which begins on Sept. 1, so there is some defensible rationale.

Perhaps by popular demand though, they've moved the launch into late August in recent years. Last year's launch on Aug. 24 was the earliest they've done. This year, the launch appears to be holding a few extra days, rumored to be Tuesday.

But Dunkin' Donuts, Starbucks' main competitor, went even earlier this year than last year, releasing their version of PSL on Aug. 10 -- technically still within the colloquial definition of the Dog Days of Summer! 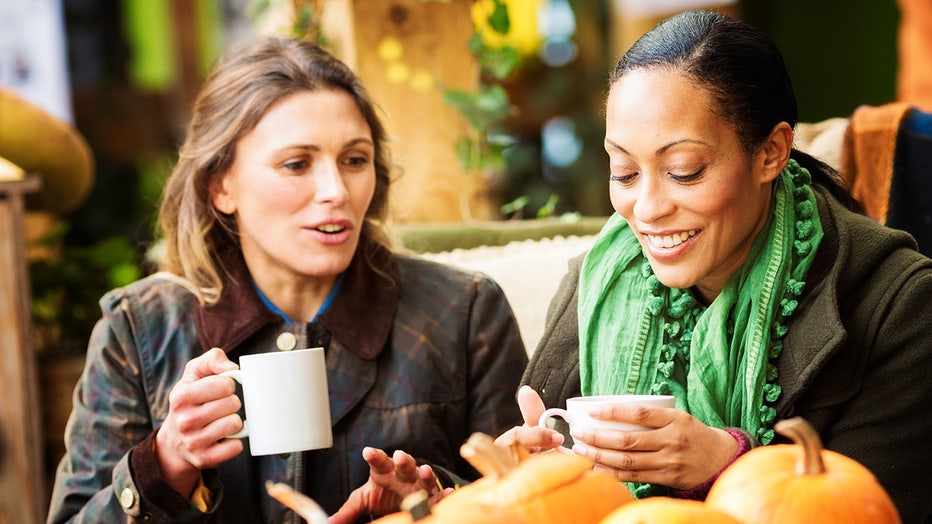 How cold should it be to enjoy pumpkin coffee? (E+ photo via Getty Images)

I'm not sure if pumpkin spice is supposed to go hand in hand with those muggy August days when it's in the 80s and 90s, but what does a fall day actually feel like? I took an informal poll here at FOX Weather to see.  Most are in New York City, but there are a large group of us scattered about the nation, so there is some geographical spread.

"When the highs hover around 60 for a least a week straight, the humid days are gone, and you feel like you have to put on a jacket most days," says Meghan Lenz, who is based in New York City.

"For me, if the temp drops below 65 it starts to feel like fall," adds Aaron Barker, who is based in Houston. He agreed the drop in humidity is also a tell-tale sign of autumn. "Once the humidity starts dropping, is when we really start to think of it as fall here. Until then, it's basically like drinking soup in the summer here."

"We routinely see high 80s to 90 here during the first week of October in Atlanta," says Shane Brown. "Once the first fall cold front makes it through in mid-October then we can talk about PSL and candy corn. Until then, it's just Summer+."

"I'm currently in Northwest Indiana and I would say mid-to-late September is when it feels like it's time to get the PSL out," says Tabitha Bartoe. "Some days it'll be fairly warm, but we tend to get cooler evenings especially when we get a nice breeze from the lake. So definitely iced PSLs in the day and hot PSLs in the evening!

What about farther west where humidity is not as much of a factor?

I'm from Seattle and I think it's more when the overnight lows start dropping into the 40s and the rains return, but that usually goes in hand with highs in the 60s.

Most others in my informal work poll were generally going with highs in the low-mid 60s. So let's use that as a benchmark for when it's meteorologically OK to drink a Pumpkin Spice Latte by showing general average high temperatures across the U.S. for each month.

Here's August…Not many spots have highs below 70 degrees. 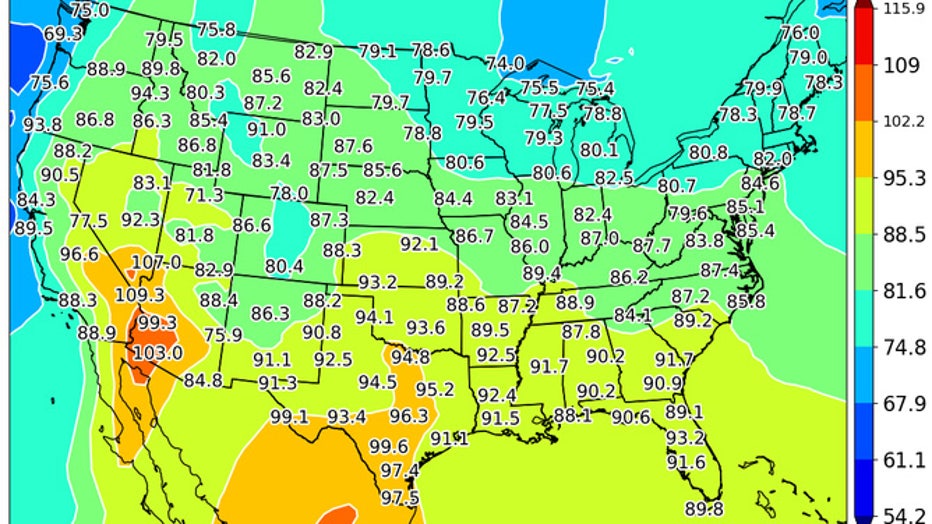 By September, you can get start getting away with it in the north: 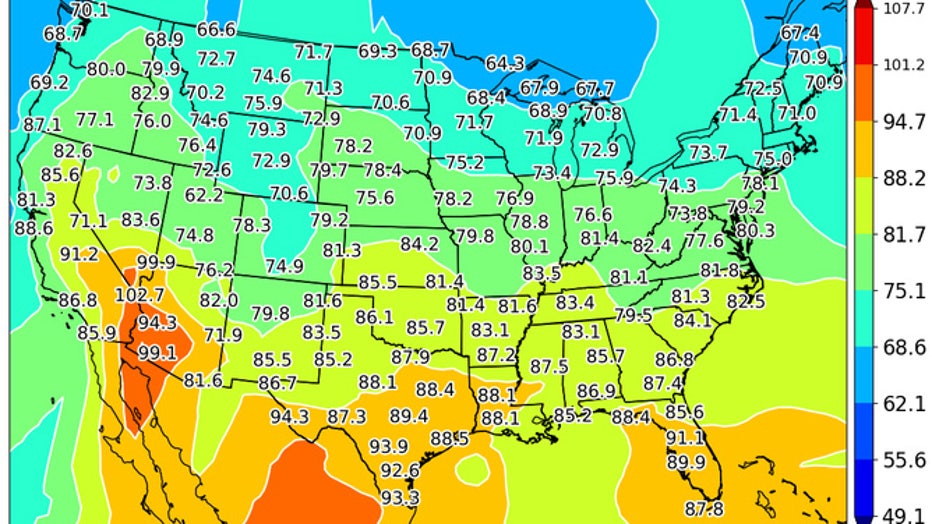 But really, October is prime PSL time across the northern half. The south probably sticks with the iced version. 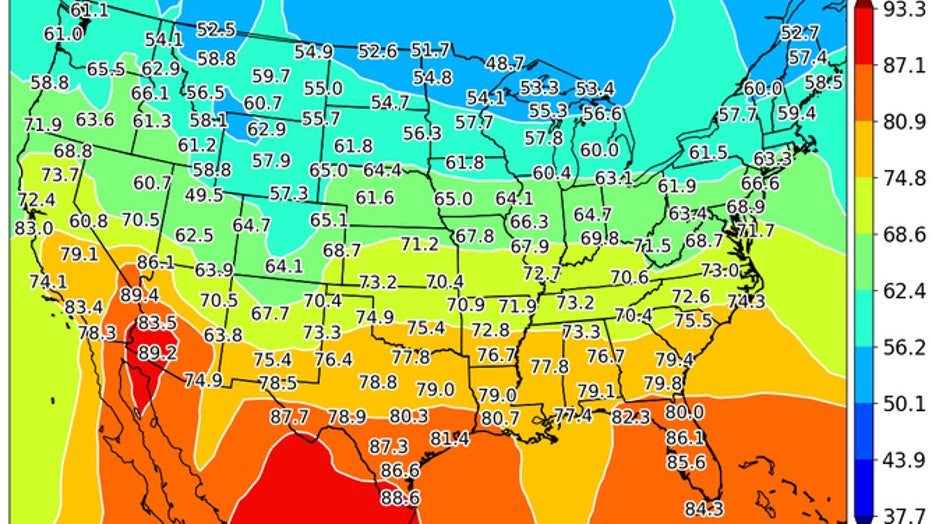 Most agree it's too early to think about fall.

I've taken an informal Twitter poll - though heavily biased to responses from the Pacific Northwest – and a slight majority seems to agree it's a bit early to celebrate autumn (and it's surprisingly consistent from a similar poll taken in 2021.)

Though I suspect those eagerly awaiting the change in season may be higher than in past years as the last two summers have been quite toasty.

Here is how 2021 shaped up for who had a hotter than average summer. The Pacific Northwest, coming off a historic June heat wave, probably had some ready for PSL's in July! 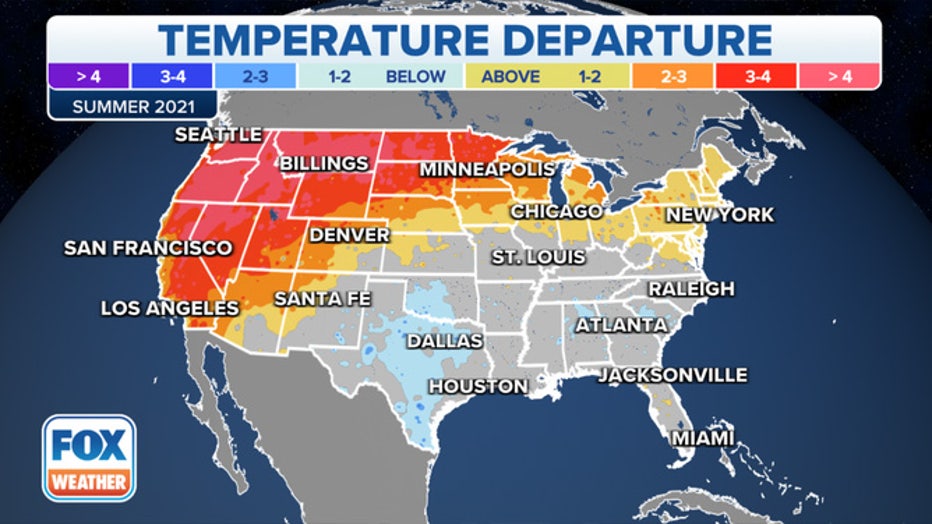 This year, the above average summer heat has been more widespread: 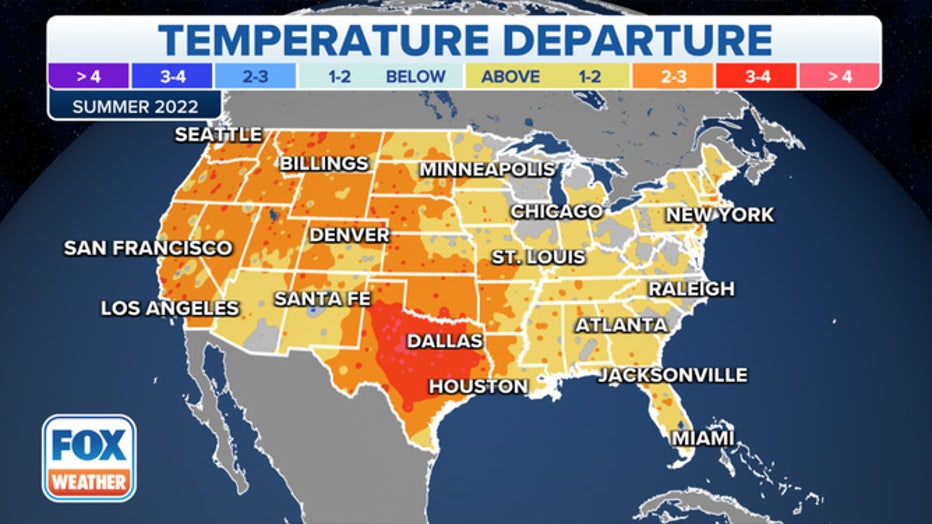 The Southeast and Texas, in particular, have had a hotter 2022 summer than 2021. 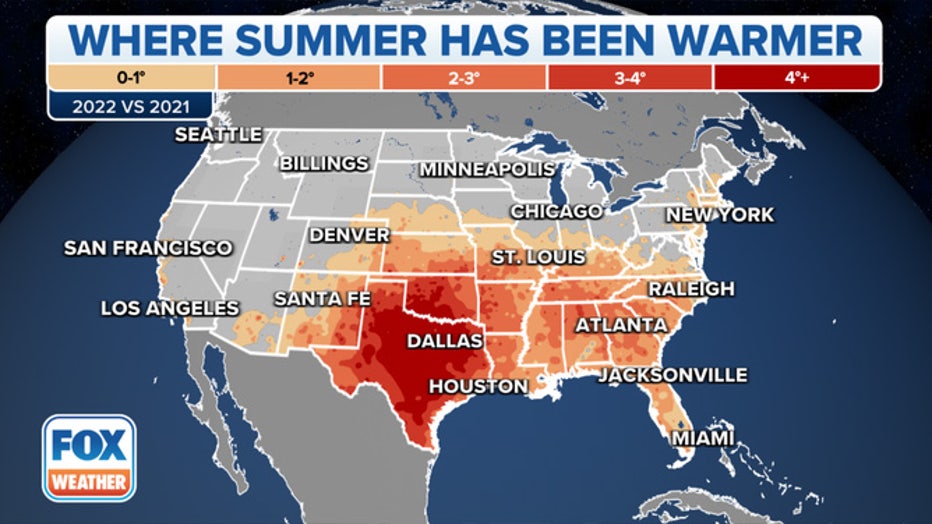 Fort Worth, Abilene and Waco are each running 7 degrees warmer by average high temperature this summer than last summer.  Perhaps the clamor for anything autumn rings louder this year? Maybe Starbucks should have brought out the PSL there by now? Certainly the iced versions…

Same goes for the Southeast.

"In Orlando, temperatures will still be in the upper 80s and low 90s at the end of August," says Emilee Speck. "The iced Pumpkin Spice Latte is the only way to go to experience the fall flavor."

Maybe August PSL launches are due to the return of Northwest rain?

Starbucks, and I assume much of its public relations team, are based here in Seattle. And if you look on this daily frequency of rain chart below – notice how around late August rain suddenly becomes a bit more frequent as Seattle starts the climb out of its summer dry season and begins its sprint toward the rainy season that begins in early October.  So perhaps Seattle skews the early autumn narrative? 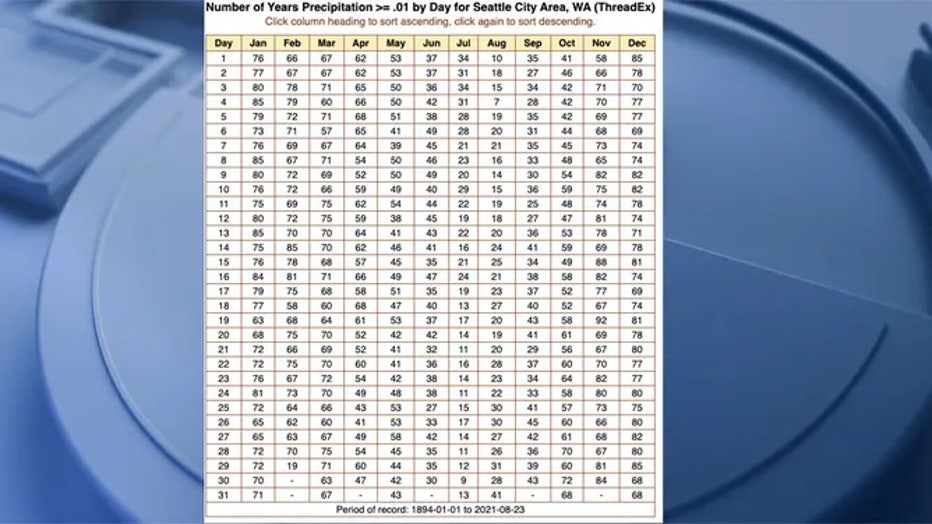 Number of times Seattle has had measurable rain on each date since 1894.(NOAA)

I'm not sure that would "hold up in court" as to defending a late August launch, but I suspect a good debate team partner would bring the point.

But there is really no meteorological defense for Dunkin' Donuts, which is based near Boston, for having any inkling of fall in mid-August. The average high is 81 and this year, the city had just come off a stretch of six consecutive days over 95 degrees on their PSL launch date. Guess that's why there's always iced versions?

Of course, it's not weather but marketing and sales that likely drive the release date. Despite the heat, people have voted with their wallet again and again for pumpkin drinks in August!

"Any time is pumpkin spice latte time in my book!" says FOX Weather's Kendall Smith. "It’s my favorite coffee flavor, so I look forward to its return each year even if it is released when it's still technically summer!"

LINK: Get more on this story from FOXweather.com