WAUWATOSA, Wis. - The Wauwatosa Police Department on Saturday, Oct. 10 released video and images from the previous night's encounter with demonstrators, during which, police say, bottles were thrown at officers.

Protests were held each day following the decision not to criminally charge Wauwatosa Police Officer Joseph Mensah in the fatal February shooting of Alvin Cole, 17.

On Friday night, Oct. 9 law enforcement officers responded to a demonstration near 76th and North Avenue where a crowd had formed after a citywide 7 p.m. curfew.

Video shows an item, which police said is a bottle, being thrown at officers around 8 p.m. Shortly after, law enforcement members deployed what appeared to be tear gas canisters and pepper balls in an effort to disperse the crowd of roughly 100 people, pushing them east down North Avenue.

A group of people allegedly attempted to set something on fire near 72nd and North Avenue around 8:20 p.m., but was not successful.

Also on Saturday, the Wauwatosa Police Department shared images of items -- including flammable liquid, lighter fluid, toilet paper and bottles -- recovered during an arrest on Oct. 9. 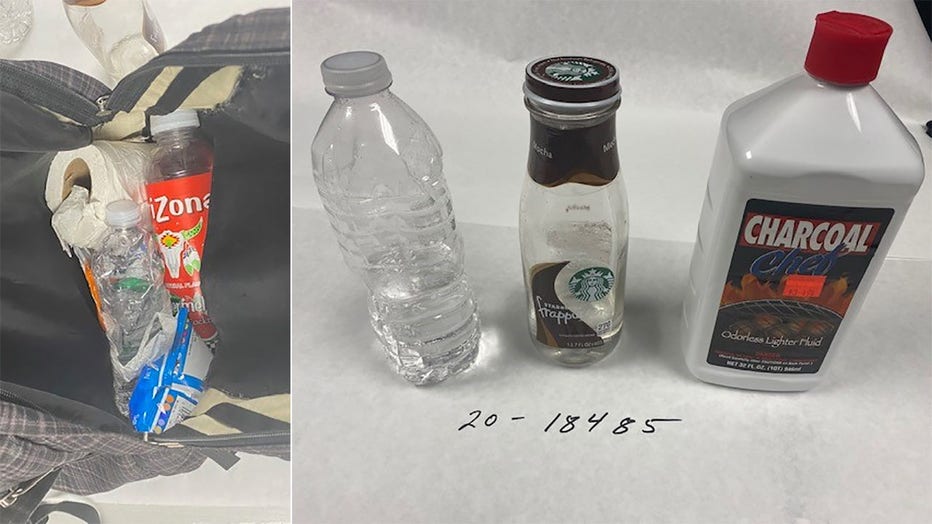 Items recovered during an arrest in Wauwatosa on Oct. 9

Police said, once the curfew went into effect on Friday night, five unlawful assembly announcements were made between 7:08 p.m. and 7:40 p.m.

Authorities arrest 28 during 3rd night of protests in Wauwatosa

Tear gas, pepper balls and paint balls were used against a group of protesters after some threw rocks and bottles at law enforcement in Wauwatosa Friday night.

Protests form in Wauwatosa for 3rd night after Mensah decision

The demonstrations have come following the Milwaukee County District Attorney's Office decision that no criminal charges will be filed against Wauwatosa Police Office Joseph Mensah after he fatally shot 17-year-old Alvin Cole in February.