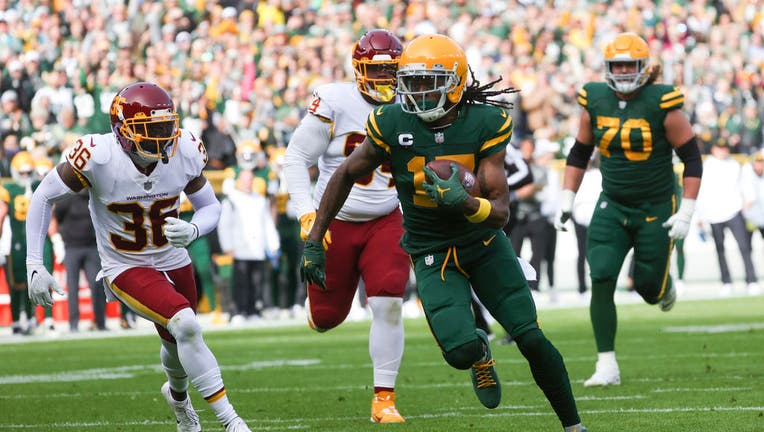 GREEN BAY, WISCONSIN - OCTOBER 24: Davante Adams #17 of the Green Bay Packers runs with the ball in the first quarter against the Washington Football Team in the game at Lambeau Field on October 24, 2021 in Green Bay, Wisconsin. (Photo by Stacy Rever

Washington outgained Green Bay 430-304 but had had five scoreless trips inside the Packers 30-yard line, including back-to-back series that ended inside the 5. Before Sunday, Packers opponents had scored touchdowns every time they reached the red zone.

The Packers (6-1) haven’t lost since falling 38-3 to New Orleans on the season’s opening Sunday. Green Bay now enters the toughest stretch of its schedule with games at Arizona on Thursday night and at Kansas City on Nov. 7.

Rodgers went 27 of 35 for 274 yards with touchdown passes to Davante Adams, Allen Lazard and Robert Tonyan.

Washington's Taylor Heinicke was 25 of 36 for 268 yards with one touchdown and one interception. He also ran for a game-high 95 yards on 10 carries.

After both teams scored touchdowns on their opening drives, the game remained tied at 7 until Green Bay took the lead for good with 15 seconds left in the first half on Lazard’s 10-yard reception. Lazard, who entered the day with just 10 catches for 124 yards, had five receptions on that drive.

Green Bay extended the lead early in the third quarter when a turnover set up Rodgers’ 20-yard touchdown pass to Tonyan. The touchdown came three plays after Rashan Gary sacked Heinicke and forced a fumble that Dean Lowry recovered at Washington’s 27.

Washington then wasted numerous chances to get back into the game.

Heinicke ran for an apparent 3-yard touchdown in the third quarter. Heinicke, who grew up a fan of Brett Favre, even did a Lambeau leap afterward. But the touchdown was overturned after replays showed his knee hit the ground just before his arm crossed the goal line on his dive into the end zone.

On a fourth-and-goal sneak attempt from half a yard away, Heinicke fumbled and couldn’t cross the goal line after he regained possession.

Washington’s next drive ended when Heinicke couldn’t connect with Ricky Seals-Jones on fourth-and-2 from the 3. Heinicke’s third-down pass on that series bounced off the upper body of a diving Terry McLaurin, who had a 40-yard touchdown reception earlier in the game.

On Washington's next series, Heinicke got the offense to Green Bay's 12 before Chandon Sullivan intercepted a pass on third-and-8 in the end zone.

On the first drive of the game, the Green Bay Packers took it to the end zone with an acrobatic throw from Aaron Rodgers to Davante Adams. It's 7-0 with 7:11 left in the 1st.

Washington answers back with an 8-play, 83-yard drive with a wild catch in the end zone. It's a tie game with 2:26 left in the 1st.

Green Bay is forced to punt following a loss of nine with a Rodgers sack. There's 1:34 in the 1st.

It's a tie game heading into the 2nd.

On their first drive of the 2nd, Washington goes for a field goal and it's blocked. Packers ball on GB 32.

Crosby's attempt at a field goal is also blocked.

Wahington QB Taylor Heinecke finds the open field and goes for a 38-yard run on the first play of the drive. It's 7-7 with 3:32 left in the half.

An attempt to convert on 4th down is unsuccessful. Packers ball on the GB 27.

The Pack goes on a 9-play drive with an Allan Lazard touchdown with 2:36 left in the half. It's 14-7 after a Crosby extra point.

On the first drive of the 2nd half, Washington fumbles into the hands of D. Lowry. Packers' ball on the WAS 27.

After a 10-play drive, Heinecke rushes the goal line and dives too soon. It's 4th and goal.

Heinecke goes for it and fumbles. The ruling on the field is being challenged by Washington.

After recovering a fumble upfield, Heinrich fumbles on the next play. Green Bay ball.

Green Bay punts and Washington turns over on downs in the red zone once again. Ball at the GB 3.

Washington fails to capitalize on a 13-play drive. Heinecke throws an interception in the end zone. It's 24-7 still with 6:29 in the 4th.

A remarkable punt by Bojorquez puts the ball at the GB 3 with 2:11 left in the game. Washington's ball.

Green Bay Packers rookie center Josh Myers has been placed on injured reserve after hurting his knee in a victory over the Chicago Bears.