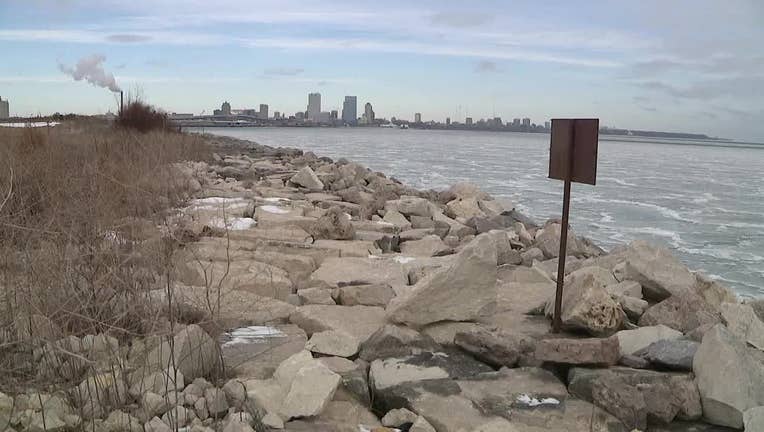 TRAVERSE CITY, Mich. - What's happening in the Great Lakes during those long, frigid months when they're often covered partially or completely with ice? A casual observer — and even experts — might be inclined to say, "Not much."

Lake scientists have long considered winter a season when aquatic activity slows. Most do their field studies at other times of year.

But researchers now think more is going on in the bitter depths than previously believed — including activity influenced by climate change. To learn more, teams will venture onto the frozen surfaces of all five lakes this month to collect water samples and other information from below the ice.

"We've been ignoring winter on the Great Lakes for so long," said Ted Ozersky, a lake biologist with the University of Minnesota Duluth, who announced the "Winter Grab" expedition Thursday.

"There are lots of ways in which ice and winter conditions can affect the ecosystem. We don’t fully understand all of them. We have a general idea of how it should work but in many cases we haven’t done the footwork to see," Ozersky said.

Crews from more than a dozen U.S. and Canadian universities and government agencies will make their way onto frozen sections of lakes Erie, Huron, Michigan, Ontario and Superior during the week of Feb. 14. That's typically around the time of maximum ice cover.

They'll take what Ozersky described as a midwinter "snapshot," measuring characteristics such as light levels at different depths, water movement and the presence of carbon, bacteria and nutrients that feed fish but also can damage the environment.

University of Michigan biogeochemist Casey Godwin will explore Lake Huron's Saginaw Bay, where phosphorus overloading has fueled harmful algae outbreaks that also plague Lake Erie. He and colleagues have gathered a lot of data from the bay, but almost none in winter, he said.

"I'm especially interested in what forms of phosphorus are present in the water during wintertime," he said. "We have ways of characterizing whether it's the type that can support the food web or contribute to harmful blooms."

One reason for growing interest in winter's effects on the lakes is how winter itself is changing.

Great Lakes ice cover has declined steadily since the 1970s and some projections indicate it could become scarce later this century.

While that might boost the cargo shipping industry, the results for lake ecology are unknown.

Ice is "a dramatic physical force," Ozersky said, influencing everything from the exchange of carbon dioxide between air and water to light penetration and the water column's thermal structure. Such characteristics can determine how much plankton is available for fish.

"We know it’s important but because we haven’t studied it, there are many areas where we don’t fully understand the effect of having or not having ice," Ozersky said.

The University of Michigan's Cooperative Institute for Great Lakes Research, a partnership with the National Atmospheric and Oceanic Administration, is funding this month's excursion.

The institute sponsored a 2019 meeting of specialists worried about the shortage of winter data as global warming boosts air temperatures, reduces ice cover and alters snow and rain patterns across the gigantic watershed that extends from Minnesota to the mouth of the St. Lawrence River in Quebec.

"Winter is the season that is altered the most with climate change," said Marguerite Xenopoulos, an ecosystem ecologist with Trent University in Peterborough, Ontario. She will take samples from Lake Huron's Georgian Bay and Lake Ontario's Bay of Quinte during the excursion.

Some crews will traverse the icy lakes in snowmobiles, all-terrain vehicles, sleds and, in one case, a fan-propelled airboat. Others will ride aboard icebreaking vessels. They'll use gas- or battery-powered augers to bore holes in the ice, which can be up to three feet (nearly 1 meter) thick.

Ozersky, who proposed the quest and will be visiting Lake Superior's Apostle Islands and Lake Michigan's Green Bay, said it won't answer all the questions but should inspire further study. He helped establish a research collaboration called the Great Lakes Winter Network.

Its studies could influence practical matters such as upgrading shoreline infrastructure and planting winter cover crops to prevent erosion, he said.

"As we get this information, we'll hopefully have a better idea what the loss of winter will mean and how to adjust management practices to mitigate the harmful effects," Ozersky said.

There is a new structure going up along Milwaukee's lakefront – a massive crane. It will be used to build the Couture – a 44-story skyscraper that will eventually include apartments, retail, and transportation.

Top tools for next winter storm

The experts share the top-rated practical tools to help you get through the next winter storm.

Port Milwaukee is getting ready to break ground this year on larger docks for the largest cruise ships – a project that comes with a $7 million price tag.