Footage captured a car being stolen outside a Shell gas station in Watertown, Connecticut, on August 14, 2022, after the vehicle was left running with the keys inside. Credit: Watertown CT Police Department via Storyful

WATERTOWN, Conn. - A car sitting idle at a gas station in Connecticut was stolen in just seven seconds, authorities said — issuing a warning to others about thieves "waiting in parking lots" for drivers to leave their vehicles unattended.

The car theft was reported at about 10:30 a.m. on Sunday at a Shell gas station in Watertown, a town located about 30 miles southwest of Hartford. Local police said the car, a black Nissan Altima, had been left running with the keys inside while the driver went inside the gas station.

Video shared to the Watertown Police Department’s Facebook page shows a red vehicle quickly pulling up and stopping next to the parked Nissan Altima at a gas pump. Someone quickly jumps out and into the car left running — and takes off.

"The vehicle was stolen in approximately 7 seconds," the police department said.

Local authorities noted how a similar car theft was reported the night before at a CVS, where the driver had also left the keys inside.

"There has been a drastic increase in stolen motor vehicles throughout town and in the area," the Watertown Police Department said.

"Please do not leave your keys in your vehicle, lock your doors and be aware of your surroundings. Suspects are waiting in parking lots for someone to leave their vehicles running unattended," the police added. 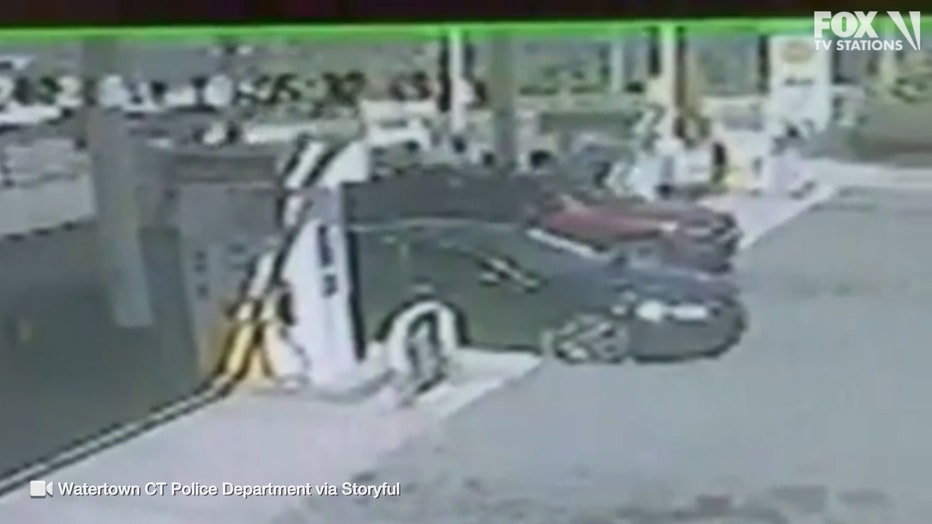 A screengrab from a video shows the red suspect vehicle and black Nissan Altima parked on Aug. 14, 2022, at a Shell gas station in Watertown, Connecticut. (Credit: Watertown Police Department)

Several people commented on the post shared by the Watertown Police Department, including one person who claimed to have seen both vehicles in the video "weaving in and out" of the lanes and into oncoming traffic around the same time.

"May I also add that purses, backpacks, wallets should never be left in plain sight, especially on the front seat," another chimed in.

In 2020, a motor vehicle was stolen every 39 seconds in the United States, according to the National Highway Traffic Safety Administration — costing owners more than $7 billion that year alone.

The NHTSA advised drivers to always take keys out of the vehicle, close and lock all windows and doors when parking, never leave valuables inside, and park in well-lit areas, if possible.

Anyone who suspects their vehicle was stolen should contact the police immediately to file a stolen-vehicle report, providing the license plate number, make, model, and color of the car, and Vehicle Identification Number (VIN).

Victims should also contact their insurance company to file a claim within 24 hours.