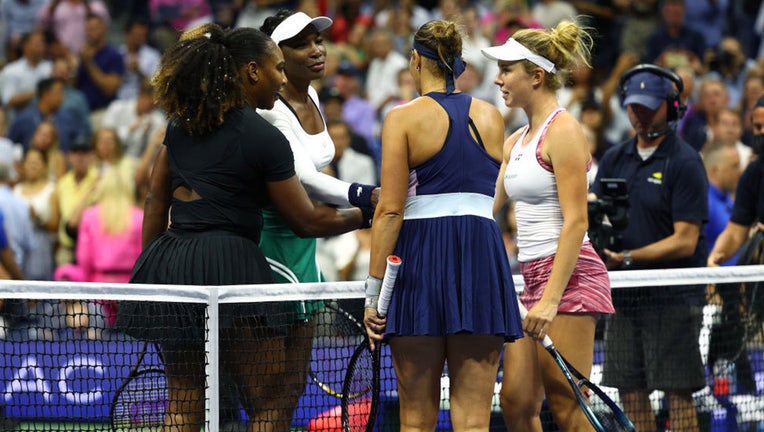 Serena and Venus Williams traded fist bumps or palm slaps and chatted between points. They smiled while conversing in their seats at changeovers.

When their first doubles match together in 4 1/2 years ended with a loss at the U.S Open on Thursday night, the siblings hugged each other, then left the court to a standing ovation.

The Williams sisters were eliminated by the Czech pair of Lucie Hradecka and Linda Noskova 7-6 (5), 6-4 at Flushing Meadows.

Arthur Ashe Stadium had never hosted a first-round doubles match — for women or men, during the night or day — until this one featuring two members of one family who have combined to claim 14 Grand Slam titles in doubles.

They were partnering up for the first time since the 2018 French Open. This was their fourth first-round doubles defeat at a Slam; the most recent had been at the 2013 French Open.

"I’m still in shock that we won," Hradecka said in an on-court interview right after the match’s conclusion.

Speaking to the crowd, she said: "I’m so sorry for you that we beat them, but we are so happy that we did it."

An announced sellout of 23,859 showed up, just like for each of Serena’s two victories in singles so far this week, although the fans were not quite as boisterous Thursday as they had been for those other night matches involving a player who has hinted that this will be the final event of her career.

Serena plays Ajla Tomljanovic on Friday night in the third round of singles; Venus was bounced from that bracket in the first round.

After a rather subdued entrance from the locker room by Hradecka and Noskova, who were competing as a team for the first time, a video tribute to the Williams-Williams pairing played on the Ashe videoboards, with a narrator introducing "two of the greatest athletes on Planet Earth" and, in a reference to Serena's looming retirement, saying, "It's not too late to change your mind." There was footage of them through the years, including as kids with white beads in their hair (like Serena's daughter, Olympia, wore on opening night) and, later, winning titles.

Olympia, who turned 5 on Thursday, was not there for this one, Serena's husband, Reddit co-founder Alexis Ohanian was, as were the sisters' mother, Oracene Price, and their sister, Isha.

During the pre-match warmup, the announcer noted that the sisters are 14-0 in Grand Slam doubles finals and declared: "They've transformed and elevated the sport as we know it."

The spectators saved their biggest cheers for some of Serena’s best efforts, whether aces or putaways or an on-the-run forehand winner. The sisters went up 5-4 early and held two set points there on Noskova’s serve, but could not convert either.

The loudest moment probably arrived after a 19-stroke point won by the sisters during the first-set tiebreaker, featuring three swinging volleys by Serena. That put them ahead 4-3, and soon it was 5-3.

But Hradecka and Noskova grabbed the next four points to claim that set. They then jumped ahead 3-0 in the second, and after the Williams sisters made it 4-all, the Czech team pulled away.

The Williams siblings received a wild-card entry into this year’s doubles field. Serena, who turns 41 next month, and Venus, who turned 42 in June, won doubles trophies at the U.S. Open in 1999 -- the year Serena won her first major singles trophy at age 17 in New York -- and 2009.

They have a total of 30 major trophies in singles: 23 for Serena, seven for Venus.

Hradecka is a 37-year-old who won two major doubles trophies with Andrea Hlavackova, at the 2013 U.S. Open and 2011 French Open. Noskova, 17, was making her Grand Slam doubles debut.

"Playing against the Williams sisters," Noskova said, "is a special moment for everybody."