President Joe Biden discussed the release of the October 2021 jobs report, which showed that employers stepped up their hiring and added a solid 531,000 jobs, during remarks on Nov. 5, 2021, at the White House.

Jobless claims fell by 4,000 last week, the Labor Department reported Wednesday. The four-week average of claims, which smooths out weekly ups and downs, dropped by nearly 7,300 to 278,000, also a pandemic low.

Applications for unemployment aid have been falling mostly steadily since topping 900,000 in early January and are gradually nearing prepandemic levels of around 220,000 a week. Claims, a proxy for layoffs, have now dropped for six straight weeks.

There were 2.2 million Americans were collecting traditional unemployment benefits the week that ended Oct. 30.

"Overall, the downtrend in filings is continuing and the level is moving closer to pre-pandemic levels,'' wrote Rubeela Farooqi, chief U.S. economist at High Frequency Economics. "Businesses facing labor shortages are likely retaining rather than laying off workers.'' 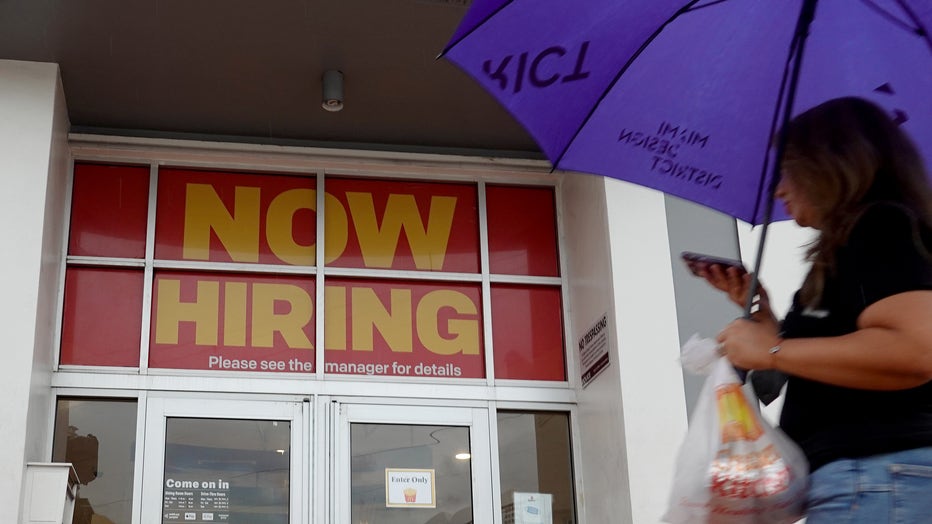 A ''Now Hiring" sign hangs above the entrance to a McDonald's restaurant on Nov. 5, 2021, in Miami Beach, Florida. (Photo by Joe Raedle/Getty Images)

The job market has been recovering for the past year and a half. In March and April of 2020, employers slashed more than 22 million jobs as governments ordered lockdowns and consumers and workers stayed home as a health precaution. Since then, employers have added more than 18 million jobs — including 531,000 last month — as the rollout of vaccines and government relief programs gave consumers the confidence and financial wherewithal to resume spending.

Now many businesses, scrambling to keep up with demand, complain they can't find workers to fill their job openings — a near-record 10.4 million in August.

Still, the economy remains more than 4 million jobs short of where it stood in February 2020.