Footage posted online on Thursday, March 17, shows vast destruction at the site of a theater in central Mariupol, Ukraine, that local officials said was used as a civilian shelter and alleged was bombed by Russia one day prior. (Credit: Azov Battalion via Storyful)

A Ukrainian man said he discovered his wife and two children were killed near Kyiv after identifying graphic photos on Twitter.

"I recognized the luggage and that is how I knew," Serhiy Perebyinis told The New York Times.

Perebyinis was helping his sick mother in eastern Ukraine when his wife decided to flee their home in Irpin, near Kyiv, with their two children last week after their apartment was hit by Russian shelling, the New York Times reported.

"I told her, ‘Forgive me that I couldn’t defend you,’" Perebyinis recalled to the outlet of what he told his wife the night before she died. "I tried to care for one person, and it meant I cannot protect you." 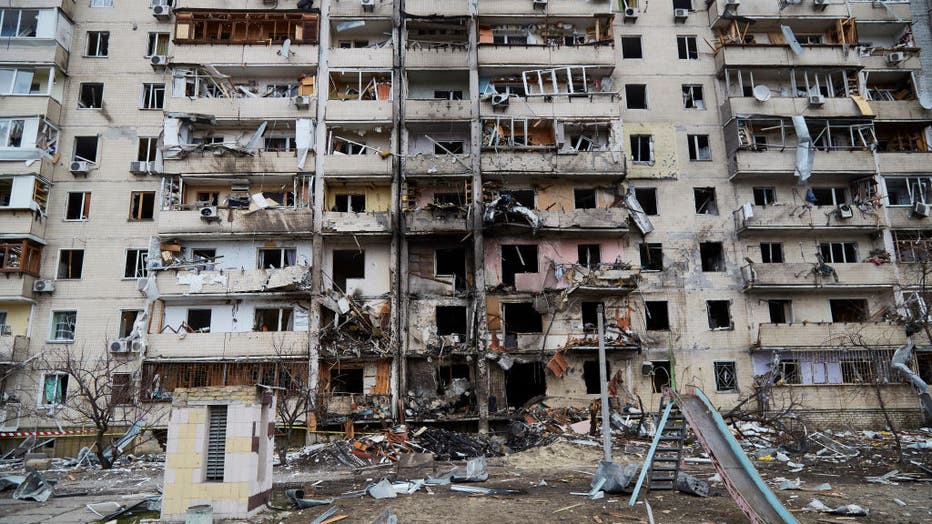 A residential building damaged by a missile on February 25, 2022 in Kyiv, Ukraine. Yesterday, Russia began a large-scale attack on Ukraine, with Russian troops invading the country from the north, east and south, accompanied by air strikes and shelli

A church volunteer, Anatoly Berezhnyi, was assisting the family flee on Sunday, but the group was 12 yards away from where a mortar shell hit. The shrapnel killed the family and Berezhnyi.

Hours after their deaths, a photo on social media circulated and Perebyinis confirmed that his wife, Tetiana Perebyinis, 43, and their two children, Mykyta, 18, and Alisa, 9, were dead based on identifying their luggage.

He said that it is important that a photograph captured his family’s death.

"The whole world should know what is happening here," he told the New York Times.

The image was taken by New York Times photographer Lynsey Addario, who witnessed a series of mortars falling before the family was killed.

"I went forward and found a place sort of behind a wall and started photographing," Addario told "CBS Evening News" host Norah O'Donnell Monday. "And in fact, within minutes, a series of mortars fell increasingly closer and closer to our position until one landed about 30 feet from where I was standing and it killed a mother and her two children."

Perebyinis later spoke with CNN’s Erin Burnett as well, who started crying while she was asking questions about his family.

"I saw a photo on Twitter and I recognized my children. I recognized their things and their clothes and I called my friends to say the children are dead, their bodies are lying on pavement, and I asked them please could you help me find my wife," he said.

He said he was able to bury his family after three days of trying, and was able to take a pet dog with him.

He and his wife had been married for 23 years.

Fighting is raging on multiple fronts in Ukraine, with intense combat in the besieged port city of Mariupol — site of some of the war’s greatest suffering.

The U.N. migration agency says nearly 6.5 million people have been displaced inside Ukraine, on top of the 3.2 million refugees who have already fled the country. Ukraine says thousands have been killed.

This story was reported from Detroit. FOX News and The Associated Press contributed.