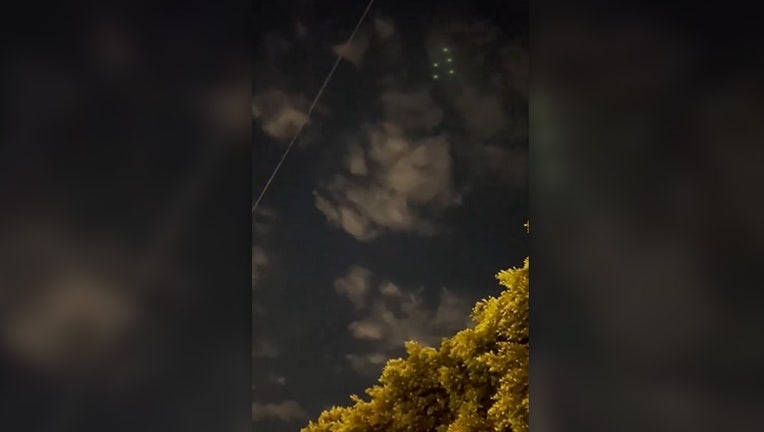 ROUND ROCK, Texas - Did people in Central Texas see some UFOs in the sky?

That's what many people are wondering after several videos captured some mysterious lights in the evening on September 1.

Video shared to FOX 7 Austin caught the lights in the Round Rock area of Brushy Creek.

Emily White, who spoke to FOX 7 Austin's Rudy Koski, says, "It was mesmerizing, honestly. It was so silent because if it was one light, then I would have maybe thought, ‘Oh, a helicopter, a plane, something like that.' But like there was so many of them together."

When asked if she thought it was a close encounter, White said, "I'll be honest, kind of. I don't know if I believe in all that, but, I don't know. Maybe, I hear a lot of it in like America that that kind of things happens. I think it's just because of like it didn't make any noise at all, which I just thought was really odd. But, yeah, definitely, definitely felt like it was like the alien invasion or something on the way."

Gus McGiven said, "I've never believed in UFO's or anything like that, but I mean, I might, I might now. I don't know, I'm not sure."

UFO sighting or drones? Strange lights captured in the sky in Round Rock area

FOX 7's Rudy Koski spoke with witnesses and a drone expert to discuss what was seen in the night sky.

The "UFOs" may actually have been UAVs, Unmanned Aerial Vehicles.

"I would have to say there's nothing extraterrestrial involved with this. But I am not to say that that couldn't be a possibility," said drone expert Gene Robinson.

Robinson, who lives in Wimberley, trains drone pilots and flies several types of UAV platforms. He reviewed the video sent to FOX 7.

"My initial take on this is that it is very likely a drone based phenomena," said Robinson.

At one point, the lights in one video clip zoomed off. Some people assume that what was in the air was projected by a laser. But Robinson noted it doesn't seem like there was anything for a laser to reflect off of.

Photos and videos have been captured of so-called UFOs for years. A recent, local sighting has caught the eye of multiple witnesses.

"That's pretty unlikely. So, I'm still thinking that this may be someone testing their do-it-yourself drone swarm," said Robinson.

The FAA requires a waiver to fly at night, especially in a swarm configuration. Officials with the agency say they are checking to see if a waiver was granted.

Round Rock police say they did not get any calls about the lights.

If it was drones, it wouldn't be the first time they were spotted in the Austin area sky. For SXSW, drones were part of a marketing campaign to help promote the television series "Halo" which is based on the popular Xbox game.

Did you see the lights?