SAN ANTONIO - A hippopotamus at the San Antonio Zoo enjoyed some pumpkins ahead of Halloween.

The zoo shared a video of Timothy the hippo chomping down on Oct. 28. It captioned the video with a sweet greeting to fellow hippo Fiona at the Cincinnati Zoo, writing: "Happy Halloween! Eating these pumpkins made me want to remind you that you're GOURD-geous!"

Fiona, born prematurely in 2017, was the first hippo born at the zoo in 75 years and stole the hearts of many online.

Timothy the hippo has his own Twitter account. His bio describes the hippo as "single, sassy and available." It adds that he has a "hippo size crush on Fiona!" 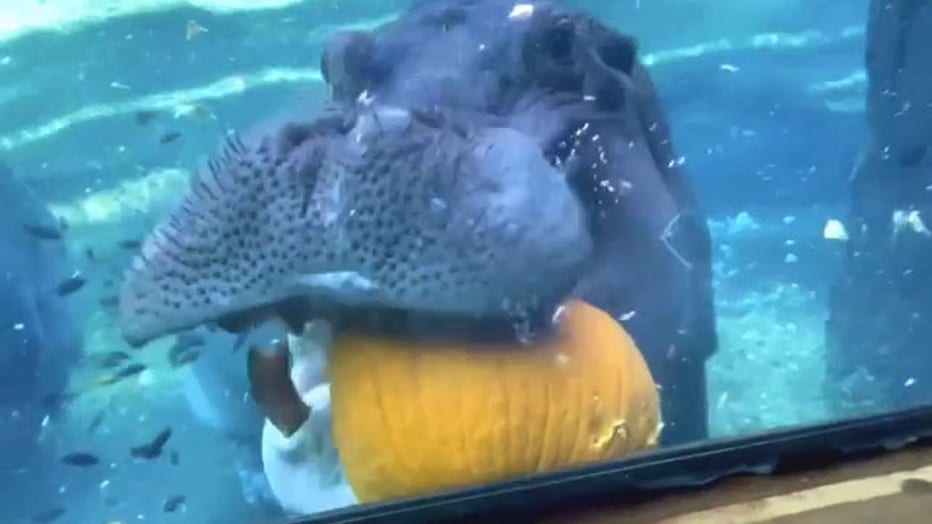 Timothy the hippo is pictured on Oct. 28, 2021. Credit: San Antonio Zoo via Storyful

Timothy has also garnered attention in his own right. Last year, the zoo brought in a talented tuba player from the San Antonio Symphony to play music for the hippos. Timothy and his grandmother, Uma, were seen swimming to a tuba accompaniment of "The Jolly Farmer Goes To Town" by Robert Schumann.

In February, Timothy was a whole mood when he was seen instantly spitting out snow he was given as a snack. Footage by the zoo showed the resident hippo rejecting the frozen treat, appearing to have had quite enough of the snow as Texas battled freezing temperatures.