Top-25 teams are in action this weekend in a quadruple header on FOX. (FOX Sports)

College football fans can start their day and end their night on FOX with four great games featuring conference rivals this weekend. 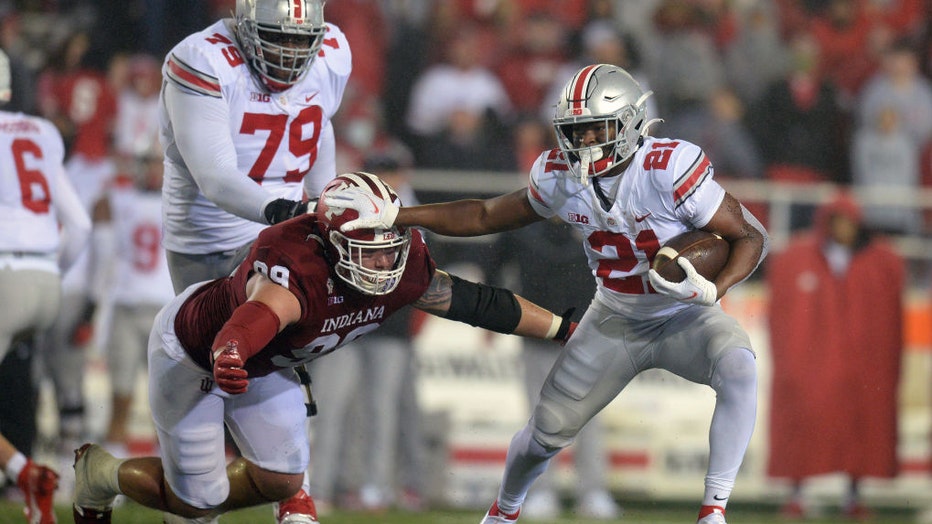 Indiana vs. No. 2 Ohio State

Ohio State didn’t look sharp in their win against Northwestern last week and will have a chance to get back on track against Indiana, who lost to Penn State.

The Buckeyes can't look past the Hoosiers, who have lost six-straight games, this weekend since OSU next week has a big Thanksgiving week showdown with No. 3 Michigan that has massive college football playoff implications.

Ohio State quarterback C.J. Stroud will look to get their offensive passing game going Saturday against an Indiana defense that struggled this season on defense.

Indiana QB Connor Bazelak returns as the starter after missing last week's game against Penn State with an injury. Bazelak averages a Big Ten-high 47 pass attempts per game but is completing a conference-low 54.9%.

Indiana hasn't beaten Ohio State since 1988 and has a 26-game losing streak against the Buckeyes. The Hoosiers desperately need a win to remain eligible for a bowl game.

Maryland vs. No. 14 Penn State

Penn State must keep winning to get to a New Year’s Six bowl and Maryland looks to rebound after losing at Wisconsin last week.

Maryland QB Taulia Tagovailoa’s versatility as a passer and runner will be key against a Penn State secondary that rarely gets beat on timing routes.

The Nittany Lions have won six of eight in the series since the Terrapins joined the Big Ten in 2014. Penn State averaged nearly 44 points per game in those wins. Maryland’s 35-19 victory in 2020 came with Beaver Stadium empty amid the pandemic.

If Maryland wants a chance to win, they will have to get help from their running game led by RB Roman Hemby who's averaging 6.17 yards per carry this season. Hemby has 63 touches for 391 yards and four touchdowns in three games.

The Nittany Lions have won six of eight in the series since the Terrapins joined the Big Ten in 2014. Penn State averaged nearly 44 points per game in those wins. Maryland’s 35-19 victory in 2020 came with Beaver Stadium empty amid the COVID-19 pandemic.

This game features two of the top quarterbacks in the nation, Oregon’s Bo Nix and Washington’s Michael Penix Jr.

Nix had a great game in a win against Colorado last week. Nix had his third straight game with at least five touchdowns. He now has 36 total touchdowns this season — 22 passing, 13 rushing, and one receiving — and is getting more Heisman Trophy consideration as the season continues.

Penix Jr. is the national leader in passing yards per game with 359.1. He has 3,232 yards passing for the season, 23 touchdown passes, and five interceptions. The QB had a streak of eight straight games with 300 or more yards passing that just ended last week in a victory over Oregon State.

The rivalry between the two schools dates back to 1900 and Washington hasn’t traveled to Eugene, Oregon, since 2018, when the Ducks beat them 30-27 in overtime.

UCLA is ranked in the Top 10 in November for the first time in eight years and finds itself among the top 12 teams in the College Football Playoff.

Quarterback Dorian Thompson-Robinson rushed for a career-high 120 yards, and Keegan Jones added 98. Kazmeir Allen led the way with 137 yards and had his second straight game with a TD run of at least 70 yards.

Arizona is ranked 11th in the conference in rush defense, allowing 218.7 yards per game. The Wildcats have given up over 200 yards five times and 300 yards in three games.

If the Wildcats want to pull an upset, the team needs a better performance from quarterback Jayden de Laura. He threw for a season-low 159 yards and no touchdowns in last week’s 45-20 loss to Utah.

The sophomore is seventh nationally, averaging 312.6 yards per game. Over the last five games, de Laura has completed 62.1% of his passes for 22 touchdowns and eight interceptions and is averaging 344.2 yards per game.

Arizona faces their fourth AP top 12 team in their last five games, making them the first Pac-12 program since Washington in 2012 to go through that kind of a stretch.

The Associated Press contributed to this story. This story was reported from Washington, D.C.