Explosions are being reported across Ukraine as Russia unleashed its largest missle barrage in recent weeks. The attacks come after explosions rocked two air bases in Russia. LiveNOW from FOX's Rain Augustine speaks with Journalist and Host of the Black Diplomats Podcast, Terrell Jermaine Starr about the ongoing war.

KYIV, Ukraine - The Russian military’s top brass came under increasing scrutiny Wednesday as more details emerged of how at least 89 Russian soldiers, and possibly many more, were killed in a Ukrainian artillery attack on a single building.

The scene last weekend in the Russian-held eastern Ukrainian town of Makiivka, where the soldiers were temporarily stationed, appears to have been a recipe for disaster. Hundreds of Russian troops were reportedly clustered in a building close to the front line of the war, well within range of the enemy’s Western-supplied precision artillery, possibly sitting close to an ammunition store, and perhaps unwittingly helping Kyiv’s forces to zero in on them.

It was one of the deadliest single attacks on the Kremlin’s forces since the war began more than 10 months ago and the highest death toll in a single incident acknowledged so far by either side in the conflict.

Ukraine’s armed forces claimed the Makiivka strike killed around 400 mobilized Russian soldiers housed in a vocational school building. About 300 more of them were wounded, officials alleged. It wasn't possible to verify either side's claims due to the fighting. 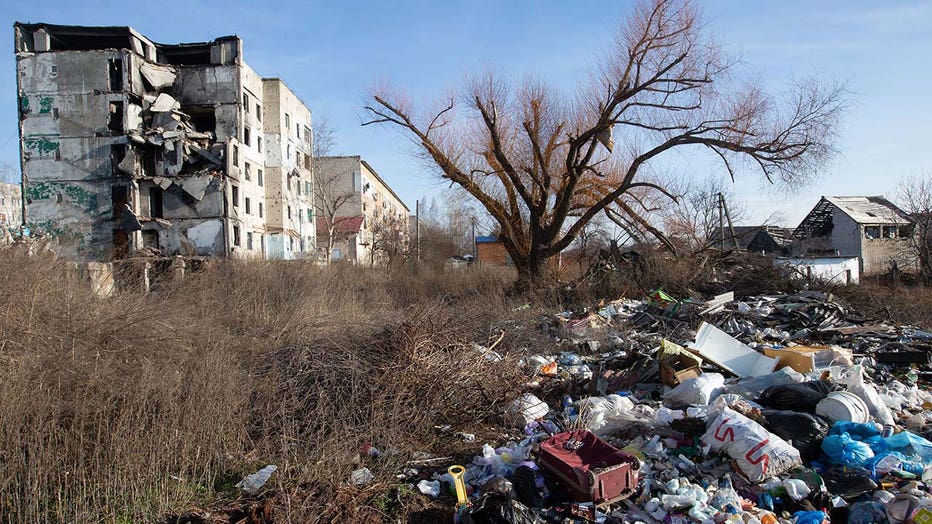 Garbage in the courtyard of a destroyed residential building in the town of Borodyanka, Kyiv region, Ukraine on January 03, 2023. (Photo by Oleksii Chumachenko/Anadolu Agency via Getty Images)

The Russian military sought to blame the soldiers for their own deaths. Gen. Lt. Sergei Sevryukov said in a statement late Tuesday that their phone signals allowed Kyiv’s forces to "determine the coordinates of the location of military personnel" and launch a strike.

Emily Ferris, a Research Fellow on Russia and Eurasia at the Royal United Services Institute in London, told The Associated Press it is "very hard to verify" whether cellphone signaling and geolocation were to blame for the accurate strike.

She noted that Russian soldiers on active duty are forbidden from using their phones — exactly because there have been so many instances in recent years of their being used for targeting, including by both sides in the Ukraine war. The conflict has made ample use of modern technology.

She also noted that blaming the soldiers themselves was a "helpful narrative" for Moscow as it helps deflect criticism and steer attention toward the official cellphone ban.

Russian President Vladimir Putin sought to move the conversation along, too, as he took part via video link in a sending-off ceremony Wednesday for a frigate equipped with the Russian navy’s new hypersonic missiles.

Putin said the Zircon missiles that the Admiral Gorshkov frigate was carrying were a "unique weapon," capable of flying at nine times the speed of sound and with a range of 1,000 kilometers (620 miles). Russia says the missiles can't be intercepted.

Meanwhile, away from the battlefields, France said Wednesday it will send French-made AMX-10 RC light tanks to Ukraine, a first from a Western European country. The decision was made during an afternoon phone call between French President Emmanuel Macron and Ukrainian President Volodymyr Zelenskyy Wednesday.

The French presidency didn't say how many tanks would be delivered and when. The NATO member has given Ukraine anti-tank and air defense missiles, and rocket launchers.

The weekend Makiivka strike seemed to be the latest blow to the Kremlin’s military prestige as it struggles to advance the invasion of its neighbor amid a successful Ukrainian counteroffensive.

But Ferris, the analyst, said that "there should be a bit of caution around leaning too heavily on this (attack) as a sign of (the) Russian army’s weakness."

As details of the strike have trickled out in recent days, some observers detected military sloppiness at the root of so many deaths.

U.K. intelligence officials said Wednesday that Moscow’s "unprofessional" military practices were likely partly to blame for the high casualty rate on the troops.

"Given the extent of the damage, there is a realistic possibility that ammunition was being stored near to troop accommodation, which detonated during the strike, creating secondary explosions," the U.K. Defense Ministry said in a Twitter post.

In the same post, the ministry said that the building struck by Ukrainian missiles was little more than 12 kilometers (7.5 miles) from the front line, within "one of the most contested areas of the conflict," in the partially Russian-occupied Donetsk region.

"The Russian military has a record of unsafe ammunition storage from well before the current war, but this incident highlights how unprofessional practices contribute to Russia’s high casualty rate," the update added.

The Russian Defense Ministry, in a rare admission of losses, initially said the strike killed 63 troops. But as emergency crews sifted through the rubble of the building, the death toll mounted. The regiment’s deputy commander was among the dead.

That stirred renewed criticism inside Russia of the way the broader military campaign is being handled by the Ministry of Defense.

Vladlen Tatarsky, a well-known military blogger, accused Russian generals of "demonstrating their own stupidity and misunderstanding of what’s going on (among) the troops, where everyone has cellphones."

"Moreover, in places where there’s coverage, artillery fire is often adjusted by phone. There are simply no other ways," Tatarsky wrote in a Telegram post.

Others put the blame on the decision to station hundreds of troops in one place. "The cellphone story is not too convincing," military blogger Semyon Pegov wrote. "The only remedy is not to house personnel en masse in large buildings. Simply not to house 500 people in one place but spread them across 10 different locations."

Unconfirmed reports in Russian-language media said the victims were mobilized reservists from the region of Samara, in southwestern Russia.

The Institute for the Study of War saw in the incident further evidence that Moscow isn’t properly utilizing the reservists it began calling up last September.

"Systemic failures in Russia’s force generation apparatus continue to plague personnel capabilities to the detriment of Russian operational capacity in Ukraine," the think tank said in a report late Tuesday.

Ferris, of the Royal United Services Institute, said the Makiivka strike shows that the Russian army is more interested in growing its number of troops, not in training them in wartime skills.

"That’s really how Russia conducts a lot of its warfare — by overwhelming the enemy with volume, with people," she said. "The Kremlin view, unfortunately, is that soldiers’ lives are expendable."