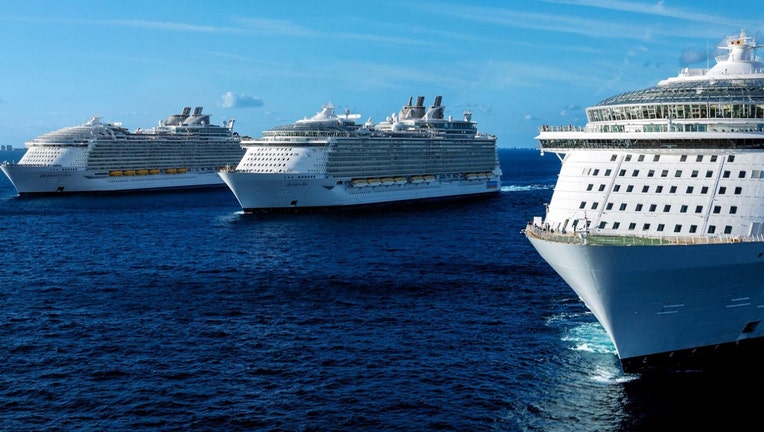 MIAMI - Royal Caribbean set sail for the first time since the start of the COVID-19 pandemic.

On Sunday, the Miami-based cruise line kicked off its trial sail, which is meant to test the company’s health and safety measures as the pandemic lingers, according to FOX 13 Tampa Bay.

The ship Royal Caribbean is conducting this trial on is its Freedom of the Seas, a 1,111-foot long and 15-deck vessel that can accommodate up to 4,553 people at a time.

However, unlike previous voyages, the ship is not bustling with thousands of passengers and instead has 600 fully vaccinated employees who have volunteered to help with Royal Caribbean’s trial.

According to FOX 13, a surveyor from the U.S. Centers for Disease Control and Prevention is on board to evaluate the cruise line’s health and safety protocols. Moreover, the trial sail left from PortMiami on Sunday, June 20 at 7 p.m.

Representatives at Royal Caribbean did not immediately respond to Fox News’ request for comment.

The company’s trial sail is being conducted days before Royal Caribbean intends to welcome paying customers onto the Freedom of the Seas for 3- and 4-night voyages to the Bahamas, which is set to start on July 2, according to a press release the cruise line issued earlier this month.

Meanwhile, Royal Caribbean’s sister ship, Odyssey of the Seas recently had its July sail dates canceled due to eight crew members tested positive for COVID-19. The ship was supposed to have its "simulation cruise" in late June, according to Michael Bayley – the cruise line’s president and CEO.

Despite the slight setback, Royal Caribbean’s Freedom of the Seas is the first American cruise ship to set sail in the last 15 months. The cruise industry as a whole notably shuttered operations shortly after the World Health Organization declared the coronavirus a global pandemic in March 2020.

The CDC lifted its no-sail order in October and had shared conditional guidelines for cruise ships that wish to sail during the pandemic, including the mandatory use of face masks, social distancing and enhanced cleaning. Last week, a U.S. District Judge Steven Merryday granted a preliminary injunction that will put an end to the CDC’s conditional sailing order on July 18.

According to the Miami-based radio show, Mack In The Morning w/ Letty B on Totally 93.9, Royal Caribbean’s Captain of Ships Hernan Zini issued a statement about the cruise line’s trial sail under the CDC’s watch.

"It is a very important moment, we have all the procedures ready," Zini’s statement reads. "We have worked many, many months to be ready at this point, together with the Florida authorities along with the CDC. And today we are putting all that to the test, a simulation cruise to prove that indeed we can do it."

The U.S. Navy conducted a first