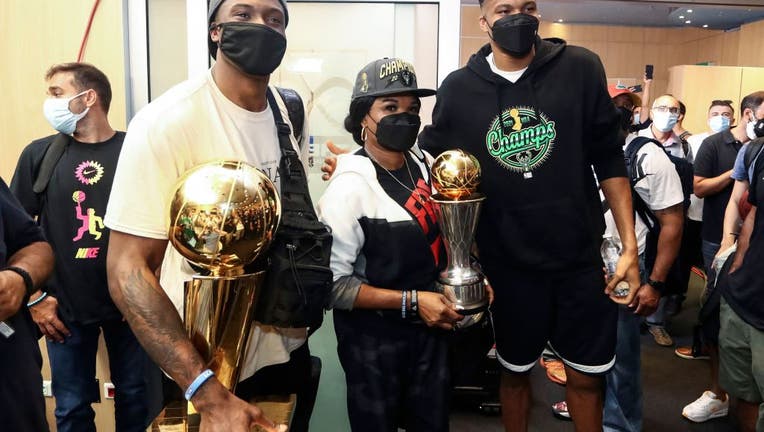 "Rise" is based on the real-life story about the family that produced the first trio of brothers to become NBA champions in the history of the league-- Giannis and Thanasis Antetokounmpo of the Milwaukee Bucks and Los Angeles Laker Kostas Antetokounmpo. The film will debut in 2022, according to a release.

"I am thrilled and honored that Disney+ is bringing my family’s story to people all over the world. My hope is that it will inspire those in similar circumstances to keep the faith, stay true to their goals and not to give up on striving for a better life," Giannis Antetokounmpo said.

"Rise" highlights how one family’s vision, determination and faith lifted them out of obscurity to launch the career of three NBA champions—two-time MVP Giannis and his brothers, Thanasis and Kostas.

Last season, Giannis and Thanasis helped bring the Bucks their first championship ring in 50 years, while Kostas played for the previous season's champs, the Lakers.

After emigrating to Greece from Nigeria, Vera and Charles Antetokounmpo struggled to survive and provide for their five children, while living under the daily threat of deportation.

When they weren’t selling items to tourists on the streets of Athens with the rest of the family, encouraged by their father, the brothers would sneak away to play basketball with a local youth team.

Latecomers to the sport, the boys discovered their great abilities on the basketball court and worked hard to become world-class athletes. With the help of an agent, Giannis entered the NBA Draft in 2013 in a long-shot prospect that would change not only his life but the life of his entire family.

The Milwaukee Bucks opened the defense of their NBA Finals championship with a win over the Brooklyn Nets on Fiserv Forum on Tuesday, Oct. 19.