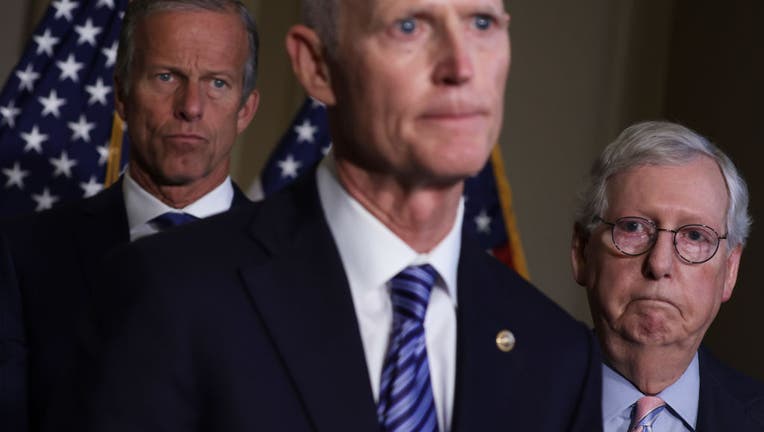 WASHINGTON - Sen. Rick Scott is running to unseat Minority Leader Mitch McConnell as the top Republican in the Senate, he announced in a note to GOP colleagues Tuesday first obtained by Fox News Digital.

Scott, R-Fla., the chairman of the National Republican Senatorial Committee (NRSC), has been at odds with McConnell. R-Ky., for most of this year over political strategy. Scott is also more closely aligned with former President Donald Trump, who has called for McConnell to be removed as Senate Republican leader.

Scott repeatedly declined to rule out challenging McConnell in recent months, but didn't confirm his intentions until Tuesday during a closed-door GOP lunch.

"I’m writing to you today because I believe it’s time for the Senate Republican Conference to be far more bold and resolute than we have been in the past. We must start saying what we are for, not just what we are against," Scott said in a letter to GOP colleagues. "I do not believe we can simply continue to say the Democrats are radical, which they are. Republican voters expect and deserve to know our plan to promote and advance conservative values. "

Scott added: "For those who want to get serious about ending reckless government spending and the devastating inflation it has caused, finally take action to protect Social Security and Medicare and preserve the promise of these programs for our children and grandchildren, hold government accountable from the FBI to the IRS, truly combat the extreme danger posed by Communist China and refocus our military on lethal defense instead of woke nonsense, I ask for your support in changing the direction of the Senate and rescuing America from the dangerous path Democrats have set it on."

McConnell brushed off Scott's challenge in comments to reporters Tuesday.

McConnell acknowledged that several of his members are calling on leadership elections to be delayed. But he said he will have the votes to be elected party leader whether it's held Wednesday as scheduled or another time.

McConnell allies, meanwhile, ridiculed Scott for challenging McConnell after a cycle in which he oversaw the NRSC, but Republicans overall were unsuccessful.

I understand that I won’t gain the support of every member of our Conference, but we all have a clear choice to make. If you simply want to stick with the status quo, don’t vote for me.

If McConnell wins re-election to his post, he would become the longest-serving party leader in the history of the Senate.

After disappointing elections for Republicans in which they failed to take the majority from Democrats, Scott has been one of the loudest voices calling for Senate leadership elections to be delayed recently.

"The leadership in the Republican Senate says, ‘No, you cannot have a plan, we’re just going to run against how bad the Democrats are.' And actually then they cave into the Democrats," Scott said on "Sunday Morning Futures." "Now they want to rush through an election. … They don't want to do any assessment of what we've done wrong."

"Like each of you, I am deeply disappointed by the results of the recent election," Scott said. "Despite what the armchair quarterbacks on TV will tell you, there is no one person responsible for our party’s performance across the country. I know there is no shortage of people who are eager to point fingers and assign blame here in Washington, but I won’t be one of them."

He also laid out what he said are complaints from GOP senators about how the conference is run, including having "no backbone"; making "deals with Chuck Schumer that a majority of our Conference members disagree with"; pressuring members to vote for certain bills; and more. Scott said he would be the candidate to change that.

"I understand that I won’t gain the support of every member of our Conference, but we all have a clear choice to make," Scott wrote. "If you simply want to stick with the status quo, don’t vote for me."

Scott, however, likely faces an uphill battle to win the GOP leader post, according to several Republican senators who spoke to Fox News Digital this week.

"I don't really see that right now," Sen. Lindsey Graham, R-S.C., said when asked if anyone, including Scott, could beat McConnell.

GET UPDATES ON THIS STORY AT FOXNEWS.COM