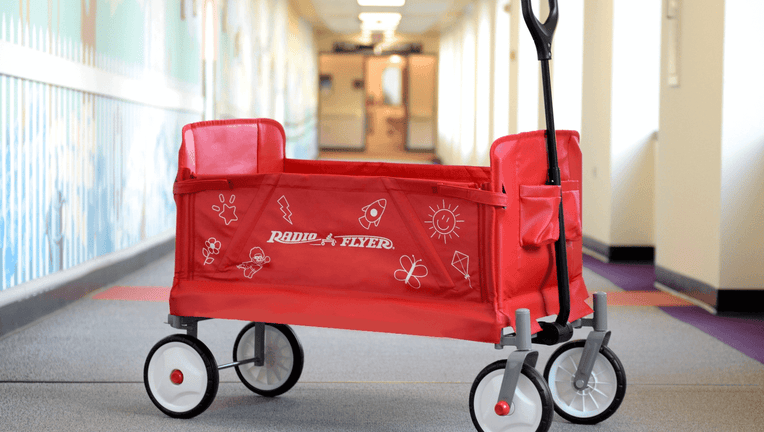 CHICAGO - Radio Flyer, the maker of the iconic little red wagon, is rolling out a specially-designed product for children’s hospitals.

"The Hero Wagon" will be wheeled out this year.

The company said the one-hand folding designed wagon is easy to store and maneuver within tight hallways and restricted storage spaces. It also comes with a seatbelt, an IV pole bracket and medical-grade fabric that can easily be wiped down and cleaned.

The company will also partner with Starlight Children’s Foundation to donate 1,000 Hero Wages annually to children’s hospitals across the country.

RELATED: How to send Valentines to kids in hospitals, nursing home residents and more

Designers said they interviewed hospital staff and conducted in-field observations before coming up with a prototype.

"This product launch is especially near and dear to the hearts of the Radio Flyer team, as it encapsulates so much of what we strive for as a company," Robert Pasin, Chief Wagon Officer at Radio Flyer, said in a news release. "Our mission is to bring smiles to all children and create warm memories that last a lifetime. If we can help bring even one smile to kids enduring some of their hardest times, we've exceeded that mission with the Hero Wagon."

According to the National Institutes of Health, there are more than 250 children’s hospitals in the U.S.

Radio Flyer traces its roots back to 1917, when Italian immigrant carpenter Antonio Pasin began making wooden wagons called the Liberty Coaster _ named after the Statue of Liberty he saw when coming by boat to America.

Ten years later, he adopted the steel assembly line process pioneered by Ford and began churning out Radio Flyers. But the company didn’t really make a name for itself until the World’s Fair in Chicago in 1933-34, when Antonio Pasin gambled on a $30,000 loan to build a 45-foot boy on a wagon.

The exhibit was a hit, and Pasin made his money back many times over by selling miniature wagons for 25 cents each.