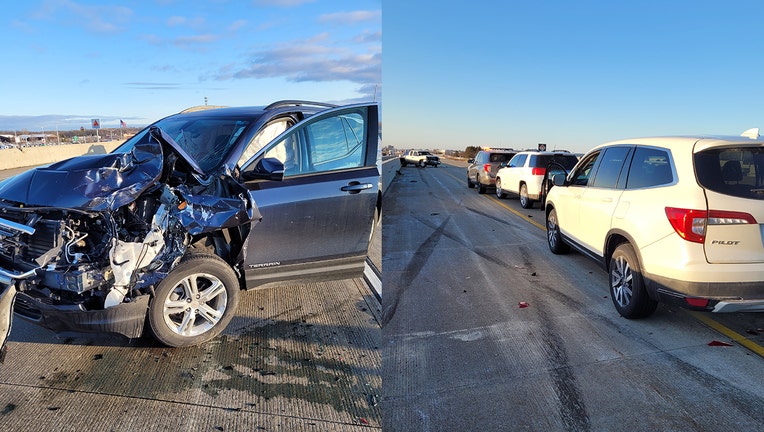 RACINE COUNTY, Wis. - Six total vehicles – including a squad car – were involved in a series of crashes on Interstate 94 in Racine County early Friday, April 1.

The Racine County Sheriff's Office said a pickup truck lost control and hit the median near U.S. Highway 20 shortly before 7 a.m. The truck came to a rest partially blocking traffic.

As deputies investigated the crash, three vehicles lined up behind a squad car while waiting to move over from the partially-blocked lane into an open lane of traffic. At that time, a fourth vehicle lost control and rear-ended the line of vehicles.

The chain reaction caused one of the vehicles to rear-end the squad car. All southbound lanes of traffic had to be shut down for approximately 15 minutes, but partial closures continued for another hour.

The driver of the fourth vehicle, which lost control prompting the chain reaction, had minor injuries and as treated at the scene. The deputy was outside his squad when it was hit and was not injured.

Freezing temperatures made the overpass where the crashes occurred "extremely icy," the sheriff's office said.

Germantown police are calling on the public's help to locate a distinctly painted school bus that officials say sideswiped a vehicle while changing lanes on southbound on I-41.