"You know, I don’t know that I gave that a whole lot of thought in terms of what I expected," Severson said. "My role as the hiring authority is to make sure that I’m looking at evidence, and I’m looking at the investigation from a factual standpoint."

Of the 76 emails and text messages FOX6 received in response to an open records request, 60 percent expressed support for Severson's decision to hire Joseph Mensah as a deputy.

Judge Schimel defends his text to Severson as a personal message to a friend that has no bearing on his decisions in the courtroom; the attorney representing the families of the people Mensah shot says this was "poor judgment," calling on Schimel to recuse himself from future law enforcement cases.

As a Wauwatosa police officer, Mensah shot and killed three people on the job in the course of five years. The Milwaukee County District Attorney cleared him of criminal charges, sparking community protests. An independent investigator for the city's Police and Fire Commission recommended firing Mensah. Although the report did not find that Mensah broke department rules on deadly force in the 2016 shooting of Jay Anderson, it did say the risk of a fourth shooting was too great and could lead to costly lawsuits. It also said Mensah provided misleading information during interviews.

Mensah and Wauwatosa mutually agreed to separate in November 2020, with the city paying Mensah for an additional 13 months.

In January 2021, Mensah joined the Waukesha County Sheriff's Department as a deputy; he received a positive recommendation from Wauwatosa Chief Barry Weber. Severson says the process to hire Mensah included a "robust team" that looked at his background and use of force. 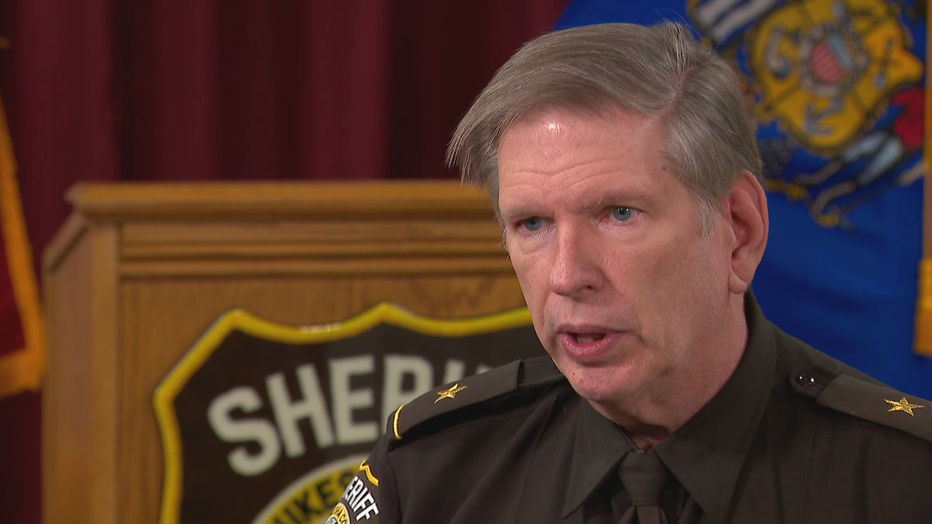 "We made the conclusion that Officer Mensah had done his job appropriately, consistent with state law, consistent with training and standards, consistent with his policy," Sheriff Eric Severson said. "And we found that he was a qualified candidate and somebody we could benefit from by having him on the department. "

Emails show Mensah was sworn in during a private ceremony, at his request.

Several of the supportive text messages and emails Severson received came from current and former law enforcement across the state and country.

"Proud to be working for you," one text message said.

"I would like to extend my appreciation for your refusal to bow to the altar of political correctness," a retired law enforcement officer in Texas wrote in an email.

"I looked at the facts," Severson said when asked about the support. "And I made a decision based on the facts, based on the evidence, based on the reports that were produced by several law enforcement entities and I came to the same conclusion. I don’t think that that’s courageous. I’m trying to make a good decision about qualified candidates that are going to serve people in Waukesha County."

But Kimberley Motley, the attorney who represents the families of the people Mensah shot, sees things differently.

"It’s his prerogative to choose who he chooses to hire as a sheriff," Motley said." I personally think it was a bad hire. I personally think he has increased the legal liabilities...I do think that Joseph Mensah is a danger to the public and I don’t think that he represents the best of law enforcement in our country."

Neither Mensah nor his attorney has responded to request for comment.

A text from a judge

In a text message to Severson, Judge Brad Schimel wrote, "Way to go! You just gave law enforcement a huge show of support that they so need right now. Someone had to have the courage to do the right thing, and I am not surprised it was you."

"Thank you, Brad," Severson texted back. "I can't tell you how much your encouragement means to me. I am very grateful."

When FOX6 showed the exchange to Kimberely Motley, she said it "troubled" her.

"I think frankly it shows extreme bias on the part of the judge to send a text congratulating him on hiring Joseph Mensah," Motley said. "I think frankly he should recuse himself from any and every case that involves law enforcement because, to me, with that text, it seems that he’s going to be biased on those cases. And it almost appears as though he’s going to be a prosecutor from the bench."

"Well first off, it’s not opining in official capacity," Schimel said in a phone interview. "I wasn’t issuing any judicial approval. It was a personal thing between Sheriff Severson and I. We’ve been friends for decades."

"I felt he did the right thing in this and I contacted my friend to let him know that," Schimel added. "In terms of how that affects me as a judge, this has no impact on that. I know many police officers in this county, I know many people who appear in front of me as defendants because I grew up in this county. I’ve even had to make decisions to send people I was friends with in high school to prison and jail."

"What’s your response to people who say, 'This seems like a cozy relationship between a judge and a sheriff’s department?'" FOX6 reporter Amanda St. Hilaire asked Severson.

"There’s a lot of assumptions that are made in that case," Severson replied. "I think you’d be hard-pressed to find a judge in any county that’s not supportive of law enforcement...the fact that a particular judge has made a comment to a sheriff about the fact that he feels I’m running the department well doesn’t necessarily create bias."

"There is no secret that I am a very much pro-law enforcement person," Schimel said. "Always have been, and that’s wide open. And I hope that law enforcement knows that about me - they know that I have their back. That doesn’t affect anything in my courtroom."

Schimel added that he at times prosecuted law enforcement officers when he was a district attorney. He also said he sees Mensah, who is Black, as a positive addition to a profession in need of more diversity.

"Deputy Mensah will get no free pass in my courtroom or any other," Schimel added. "He’ll have to explain his actions, they’ll have to be reasonable when he testifies and I’ll hold him to same standard as any other police officer.

"So if Deputy Mensah were to appear in your court in the future, would you recuse yourself?" FOX6 reporter Amanda St. Hilaire asked.

"[That] can be prejudicial to the person that’s in front of his court," Motley said. "And so I thought it was a poor judgment on his part to send that text. I’m glad that it’s something that is available to the public and we’ll see what happens."

Although the majority of the messages to Severson in the open records response were positive, there were several criticizing the decision to hire Mensah.

"The hiring of Joseph Mensah is absolutely unacceptable," one email said. "He is dangerous and cannot be trusted to protect our community. This hire makes a mockery of your mission statement."

"The last thing we need is a trigger-happy police officer," one email said. Another one was signed, "Your fearful citizen."

"I strongly believe that hiring this individual presents a huge risk of future liability to Waukesha Co.," one person wrote.

"Well, first of all, you’re assuming that liability is elevated," Severson replied. "That a fact that you’re assuming that’s not in evidence. Every one of my police officers, every one of my deputy sheriffs goes out into the community and runs the risk of going to a call where somebody may threaten them with deadly force and they may have to respond with deadly force. That isn’t confined to any one law enforcement officer and anyone’s past history of coming into those kinds of situations isn’t predictive of future use of force. So to suggest that there is some kind of elevated liability, I don’t agree that there is."

"That’s the conclusion that the Wauwatosa report came to though, that there was too great of a risk that he’d be involved in a fourth shooting," St. Hilaire said.

"And I disagree with that completely," Severson said. "I don’t think that that’s a sensical conclusion. So I don’t know how to respond to something like that."

"I looked at the facts very carefully, I involved other people in the decision-making process, and I came to a different conclusion," Severson added. "And that’s my decision to make."