President Donald Trump held a campaign rally in Janesville, Wisconsin on Saturday -- the second of two events his campaign held that day.

The campaign stop was the president's second of the day; he delivered remarks on "the American way of life" in Michigan before traveling to Janesville.

"Seventeen days from now, we're going to win the state of Wisconsin," President Trump said. "And we are going to win four more years in the White House."

President Trump was the first Republican nominee to win Wisconsin since Ronald Reagan in 1984, when he took the state -- but not Rock County, where he rallied Saturday -- in 2016.

Hillary Clinton underperformed in the county in 2016; her 51% win was much lower than other recent Democratic nominees. When three of the past five presidential elections in Wisconsin were decided by less than a point, you can see why the president and his team keep blitzing the Badger State.

"If we win Wisconsin, we win the whole ball game," said President Trump.

President Donald Trump made two campaign stops on Saturday, including in Janesville.

The president's rally came as COVID-19 spikes in Wisconsin; a record 3,861 new cases were reported by the Wisconsin Department of Health Services on Friday. Democrats criticized the rally, calling it a "superspreader."

"I put my mask on, I wore it on the bus," said Waukesha resident Barbi Kaminski, who attended the rally. "Out in the open I don't feel too concerned about (COVID-19). And I'm not putting my fingers in mouth or in my eyes, so I'm using common sense." 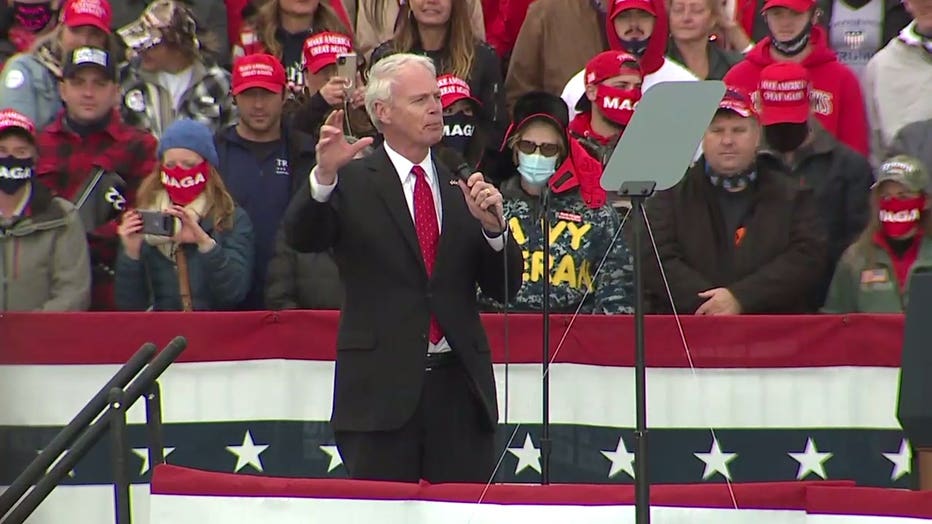 Wisconsin Sen. Ron Johnson, all clear after testing positive for COVID-19 earlier in the month, warmed up the crowd in Janesville prior to the president's arrival and also spoke partway through the president's remarks.

Air Force One lands in Janesville

President Donald Trump arrives in Janesville via Air Force One for a rally.

As of Saturday morning, Wisconsin clerks had sent out 1.3 million absentee ballots; already, 61% of those are back. By Wisconsin law, they won't be able to be counted until 7 a.m. on Election Day.

Real Clear Politics' average of Wisconsin polls puts Joe Biden ahead by 6.3 points. That was roughly the same as what the polls had for Hillary Clinton in 2016.

According to Ronna McDaniel, chairwoman of the Republican National Committee, tweeted that data from the rally shows an "even broader base of support" for the president.

Biden, ahead of the president's Saturday rally, issued the following statement:

Wisconsin is in the grips of one of the worst coronavirus outbreaks in the country. Jill and I are praying for the health of those who’ve contracted the virus, and for the families who are mourning the loss of a loved one. We have lost far too many lives to this pandemic — and the sad fact is, it didn’t have to be this way.

President Trump is knowingly downplaying the severity of the virus. At virtually every turn, he has panicked and tried to wish it away, rather than doing the hard work to get it under control. And today, 150,000 fewer Wisconsin workers are employed than when President Trump took office and his failed response to the pandemic has crushed Wisconsin’s economy.

If you send me to the White House, I’ll be ready to tackle this crisis on day one. My administration will trust the science, lead by example, speak the truth to the American people, and help Wisconsin families and small businesses build back better than before.