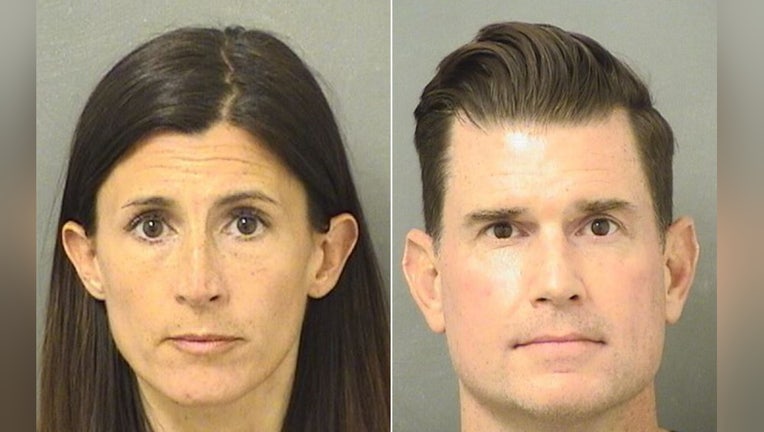 Tracy and Timothy Ferriter have been arrested and charged with abusing their teenage son by the Jupiter police. (Palm Beach County Sheriff's Office)

JUPITER, Fla. - A Florida couple has been charged with aggravated child abuse after they allegedly forced their 13-year-old adopted son to live in an 8’x8’ box located in their garage, officials said.

Jupiter police arrested Tracy and Timothy Ferriter after investigators said the child was forced to live in the structure for five years, since he was first adopted.

WPTV reports that the teen was able to attend school, but was locked up the rest of the day while at home, police said. Meals were brought to him and a bucket was provided for bathroom use. A mattress was also placed inside. A deadbolt and a light switch were installed on the outside of the box and a camera was installed inside, investigators said.

Detectives said the Ferriters had been physically abusing and locking the boy up since they first adopted him in 2017.

The boy told Jupiter police he was "slammed against a wall by his neck" and was spanked with a belt and a jump rope, according to WPEC.

The arrest came after Tracey reported her son missing on Jan. 28. Days later, on Jan. 30, investigators visited the home and said they found the structure.

Police visited the 13-year-old at Independence Middle School, where they interviewed him and learned of his alleged living conditions, officials said. The boy allegedly told the detectives that he was locked away for up to 18 hours per day.

The child told investigators he ran away from the home "because I feel like no one loves me" and that he did not feel safe, WPTV reported. The teen then pleaded with officers to arrest him, saying "he would rather be in prison than be back at home."

After the couple was arrested, the other children living in the home, including a 2-year-old, were taken into protective custody by DCF, according to WPTV.

In court, the couple's defense attorney that suggested the teen had reactive attachment disorder, a condition where child doesn't form a healthy emotional bond with his or her caretakers, and said the condition may have been a reason why the Ferriters locked the teen up.

The Ferriters have been charged with aggravated child abuse and false imprisonment and are being held at the Palm Beach County Jail, police said. Their bond was set at $50,000 by a judge, who also instructed them to have no contact with any of their children, WPEC reported. They both bonded out hours later.