An acrobatic and hungry black bear balanced on a porch railing to steal some bird seeds from a Maine family home on May 12.

JACKSON, Wyo. - The U.S. Fish and Wildlife Service said on June 11 that it is working on a plan to carry out a targeted hazing operation against a local grizzly bear which has situated herself near a heavily trafficked highway in Wyoming.

The bear, commonly known by wildlife personnel and local observers as "Felicia" or Grizzly Bear 863, has reportedly become desensitized to human interaction. So have her two cubs, who appear to not run when people approach them to take photographs, officials say.

Felicia is typically spotted along Highway 26/287 which is located in Yellowstone National Park, roughly 55 miles east of Jackson.

RELATED: 'Get outta there!': Woman films acrobatic bear balancing on porch to eat from bird feeder

The agency is urging local residents or travelers to avoid the animals due to the potential for unsafe interactions.

So far, Felicia has not appeared to be aggressive towards any human onlooker, nor has she attempted to attack anyone — but the U.S. Fish and Wildlife Service isn’t taking any chances.

"As a result of continued harassment by wildlife viewers creating unsafe conditions on Togwotee Pass in Wyoming, the U.S. Fish and Wildlife Service and partners plan to conduct targeted hazing operations on Grizzly Bear 863," said the Service.

"Approaching, disturbing, or feeding bears – as is occurring on Togwotee Pass – is extremely dangerous to both humans and bears. These actions habituate animals to human development and can lead to dangerous human conditioned behavior. When this happens, bears may become aggressive and threaten human safety," the service added. 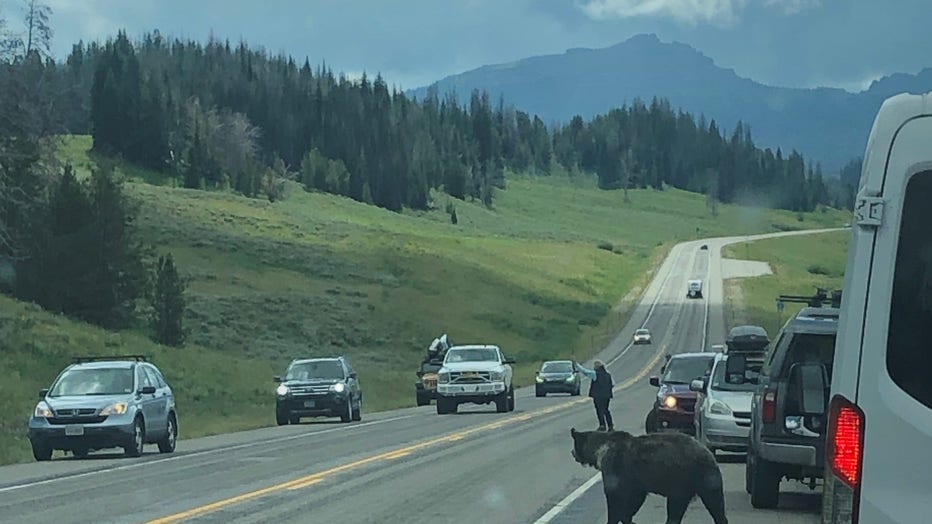 But the U.S. Fish and Wildlife Service says if hazing tactics to get the bear and her cubs to leave the area fail, they may have to resort to euthanizing the animal to avoid any human fatalities or injuries.

"If hazing does not resolve conflicts on Togwotee Pass, escalating management options include relocation and possibly euthanasia. By avoiding approaching or feeding bears, the public can help ensure that the need for such significant management options is unnecessary," the agency said.

The plan to possibly kill the bear has been met with backlash by local advocates, who have created an online petition to call for another way of solving the issue.

"The narrative that the Fish and Wildlife Service is using, calling this family a so-called ‘dangerous situation’ is – to put it bluntly — absurd," petition authors wrote.

So far, more than 21,000 signatures have been gathered in hopes of saving Felicia’s life.