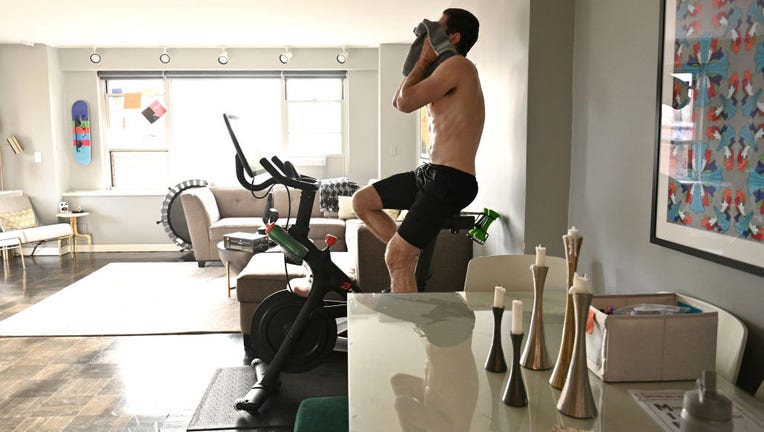 FILE - A person works out on a Peloton high-tech stationary bike in his apartment on May 18, 2020, in New York City. (Photo by Michael Loccisano/Getty Images)

NEW YORK - Peloton is looking to trim hundreds of jobs as the company continues to reorganize its business which has stalled as the coronavirus-related surge fades.

The maker of high-end exercise equipment plans to cut approximately 500 jobs or about 12% of its workforce.

"A key aspect of Peloton’s transformation journey is optimizing efficiencies and implementing cost savings to simplify our business and achieve break-even cash flow by the end of our fiscal year," a company spokesperson said in a statement.

Peloton Interactive Inc. said Thursday that it has completed the vast majority of a restructuring plan that it started in February. That plan included a new chief executive and a smaller store base.

Peloton has been attempting to adjust its business to the current market after experiencing incredible sales growth during the height of the coronavirus pandemic. The New York-based company's shares surged more than 400% in 2020 amid lockdowns that made its bikes and treadmills popular among customers who pay a monthly fee to participate in its interactive workouts.

But Peloton's sales began to slow last year as the distribution of vaccines sent many people out of their homes and back into gyms. The company has steadily worked on its restructuring efforts this year. In August, it announced that it would cut 784 jobs, close its North America distribution network and shift its delivery work to third-party providers. A push is also being made to sell its equipment to consumers through various retailers, including Amazon and Dick's Sporting Goods.

RELATED: Peloton Bike coming to all Hilton-branded hotels in US by end of 2022

The company is working to return to profitability. In its fourth quarter, Peloton lost $1.24 billion, stung by restructuring and other charges. Revenue dropped to from $936.9 million to $678.7 million. Its annual loss for the fiscal year totaled $2.8 billion.