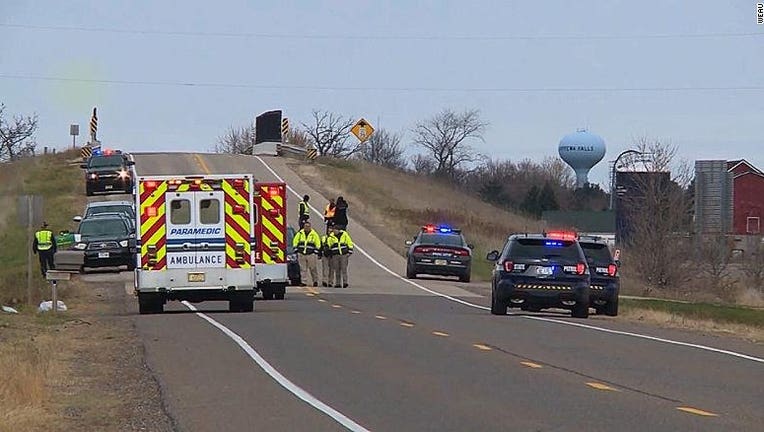 CHIPPEWA FALLS, Wis. - The passenger in a pickup truck that struck and killed three Girl Scouts and a mother who were picking up litter along a Chippewa County highway has pleaded no contest to a charge for his role in the 2018 crash.

John Stender, 24, of Eau Claire, entered the plea Monday to aiding a felon-falsifying information. A misdemeanor charge relating to huffing from an aerosol can was dismissed.

Stender was charged for failing to assist law enforcement following the crash and not returning to the scene after he left it with Colten Treu, the driver, the Star Tribune reported.

Treu was sentenced to 54 years in prison after entering no contest pleas to four counts of homicide by intoxicated use of a vehicle and one count of hit-and-run causing great bodily harm.

According to the criminal complaint, Treu and Stender had purchased an aerosol can at the Lake Hallie Walmart on Nov. 3, 2018, and were huffing as they drove back to Treu’s home in Chippewa Falls.

The crash happened as Treu was driving northbound on Highway P in Lake Hallie, veered off the road and struck the group of Girl Scouts.

The four people killed in the crash were Autumn Helgeson and Jayna Kelley, both 9, Haylee Hickle, age 10, and her mother, Sara Jo Schneider.

Another 10-year-old girl was injured in the crash and was hospitalized for three weeks.

The girls were fourth-graders and members of Troop 3055 in nearby Chippewa Falls.

Subaru is recalling nearly 875,000 cars and SUVs in the U.S. because the engines can stall or a rear suspension part can fall off.

The Home Depot is preparing for a busy spring season by hiring more than 490 part-time and full-time positions in the metro Milwaukee area.