The Hartford Joint 1 School District voted to spend $130,000 in pandemic aid on a contract that benefits the superintendent's family.

HARTFORD, Wis. - The federal government is showering Wisconsin schools with more than $2 billion in pandemic relief funds. The latest round aims at helping students recover from the so-called "learning loss" that resulted from school closures and virtual learning. But FOX6 Investigator Bryan Polcyn found one school administrator who has turned learning loss into a financial gain for his own household.

"I didn’t do anything wrong!" declared Mark Smits, who sat down with FOX6 Investigator Bryan Polcyn after a board meeting on May 25.

Smits is the superintendent (also known as the "District Administrator") of the Hartford Joint 1 School District, which consists of two elementary schools and one middle school in Washington County.

Like other districts across Wisconsin, Hartford Joint 1 has been hit hard by the COVID-19 pandemic.

The classroom disruptions are apparent in student test scores. In the 2018-2019 school year (the last full year before the pandemic), more than half (50.3%) of HJT1 students were proficient or advanced in math. By 2020-21 (the most recent year available), that dropped to 38.9%.

"We have to stop that!" Smits said. 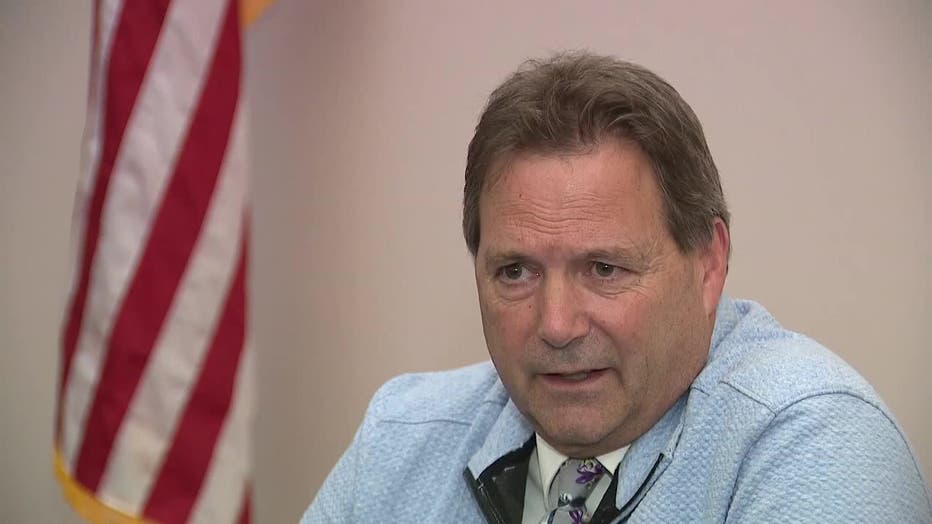 That's where the Elementary and Secondary School Emergency Relief program (ESSER) comes in. Since the pandemic began, the federal government has allotted Wisconsin schools more than $2 billion in aid. The latest round -- known as ESSER III -- directs more than $1.3 million to Hartford Joint 1. 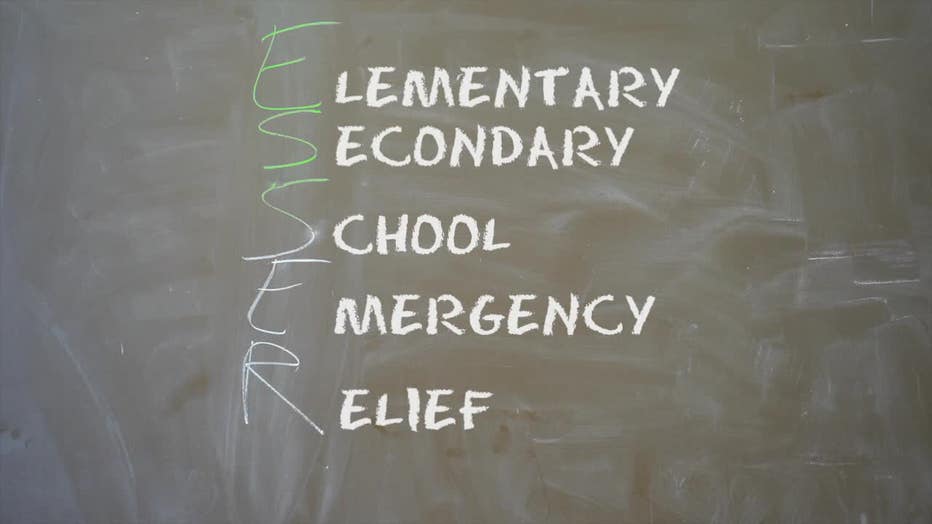 According to program rules, at least 20% of ESSER III funds must be spent addressing learning gaps experienced by students like Wesley Gronbeck.

"He’s the one that is struggling the most," said Jessica Gronbeck, a mother of four Hartford J1 students.

Wesley, a 4th grader at Rossman Elementary School, has speech and learning challenges Gronbeck said were compounded by the COVID-19 disruptions.

"I'm not a reading specialist," Gronbeck said. "I’m not a teacher. So I did the best I could." 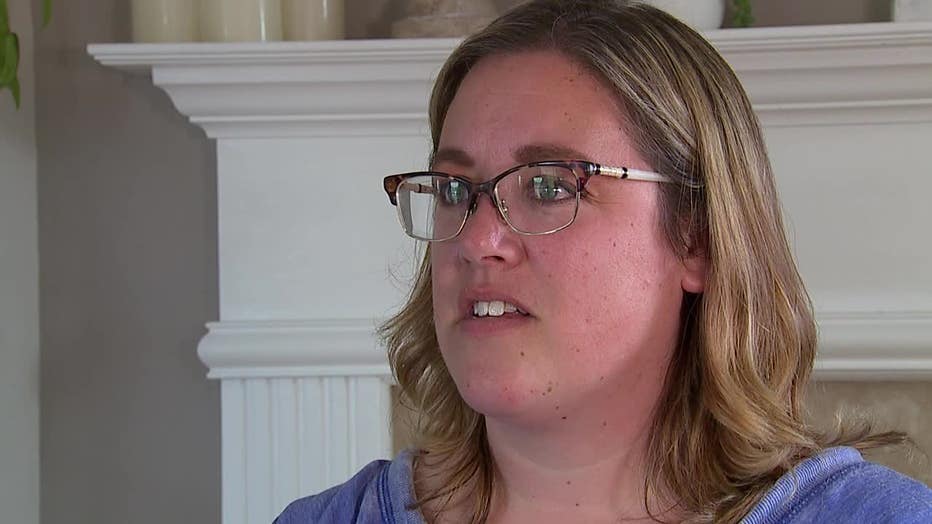 Dr. Smits said the key to turning things around is getting more kids to use Exact Path, an online learning tool created by a Minnesota-based Edmentum. In the five years since the district started using Exact Path, it has struggled to get some parents to buy in.

"Not at all," Gronbeck said. "I don’t know anybody that likes it."

Smits said that is why they need to bring in an expert. Someone who could engage parents and encourage more consistent use of Exact Path at home.

"We have to have an impact player," Smits said. 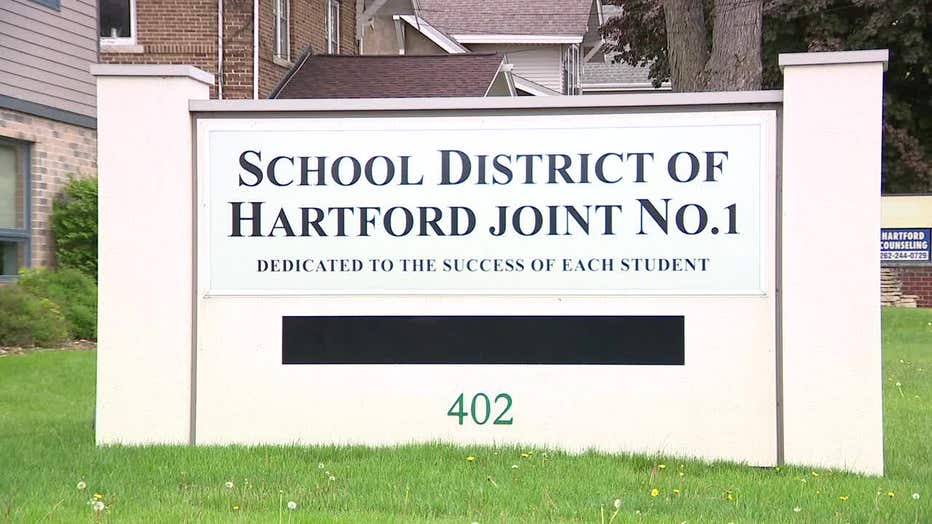 So last fall, the school board voted to spend more than $130,000 over three semesters on a newly-created position – District Community Coordinator – to "nurture the staff and parent/guardian relationship" and to "promote extended learning opportunities." And to do all of that without stepping foot in a classroom.

"She’s not working with students," Gronbeck said. "Then what is she doing?"

The D.C.C.'s primary job is to send emails and make phone calls to parents about Exact Path. In December, the board voted to give that job to a retired district teacher named Cindy Smits – Mark Smits' wife. 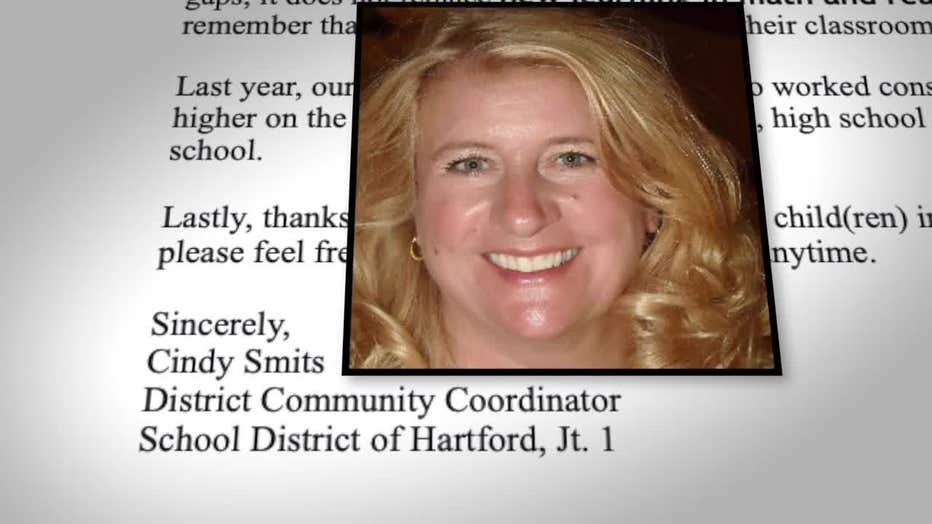 "Do you think this is a conflict of interest?" Polcyn asked.

"No, I don’t think this is a conflict of interest," Smits replied.

Still, emails obtained by the FOX6 Investigators through a public records request raise questions about the level of transparency that led up to the hire, and the role Dr. Smits played in making it happen.

"I have no involvement in the hiring process whatsoever," Smits said.

State ethics code prohibits public officials -- including superintendents -- from using their position to benefit themselves or their immediate family. In fact, it's a felony for a public official to "enter into a contract" in which he or she "has a private pecuniary interest."

In October, Smits took part in a virtual meeting with his curriculum director about the District Community Coordinator position. Over the next few weeks, she blind copied him on contract negotiations and kept him in the loop on how his wife's contract would be structured.

After the board voted to approve the contract Dec. 14, the district requested an electronic copy of the contract with Cindy Smits' name added. Minutes later, Mark Smits signed it.

Board President Greg Erickson does not have a problem with that.

"He didn’t step away from that one considering he was signing a contract that employs his own wife?" asked Polcyn. 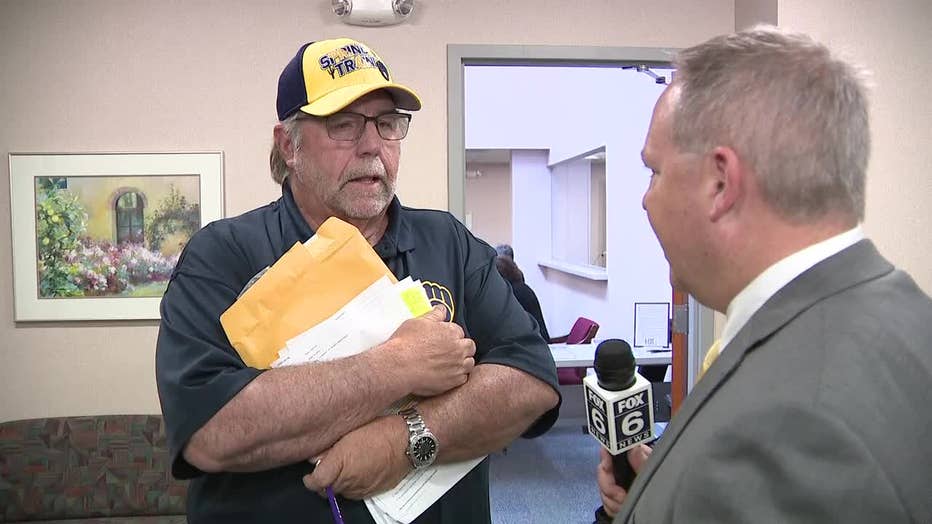 Instead of hiring Cindy Smits directly, the district contracted with a third-party staffing agency known as CESA 6. It is one of 12 regional Cooperative Educational Service Agencies in Wisconsin that allow districts to save money by pooling resources to share staff members and equipment. 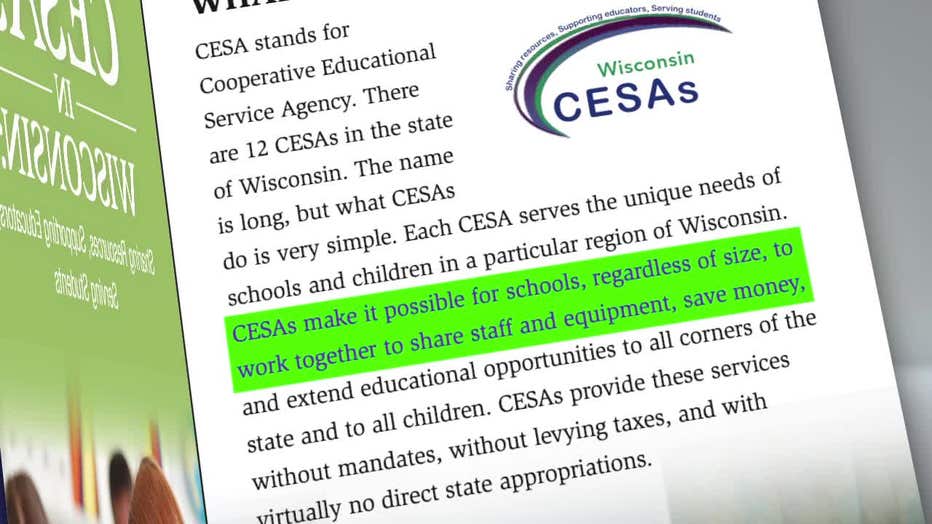 Emails obtained by FOX6 Investigators show Hartford Joint 1 never intended to share Cindy Smits with any other school district. In fact, she was not an employee of CESA 6 at all.

In October, the school district asked CESA 6 to hire Smits, then immediately contract her full time services back to Hartford. But why?

"That’s the question," Gronbeck said. "What were they trying to hide?"

"What's the benefit to going through CESA for something like this instead of just hiring a person directly?" Polcyn asked.

"It’s limited term," Smits answered, referring to the temporary nature of the ESSER money that is funding the position.

"You could, but it’s convenient that it's a limited term," Smits said.

As news of the contract spread, teachers sent the school board anonymous letters, complaining about a lack of transparency, "nepotism," and accusing Dr. Smits of "taking our ESSER funds and putting them directly into his pocket."

Five staff members talked to FOX6 Investigators on the condition we not identify them.

"I was livid," said one. "She doesn't come into the office. She doesn't work with any kids."

A second added, "They used ESSER funds that could have been used to support students who've experienced learning loss with one-on-one interventions."

A third said, "I can't wrap my head around why the board would let this fly."

Of course, that assumes board members knew who they were hiring.

"There’s not a single document that says that prior to it happening," said Polcyn.

Dr. Smits now says he talked to board members about bringing his wife back, though he can't say when. 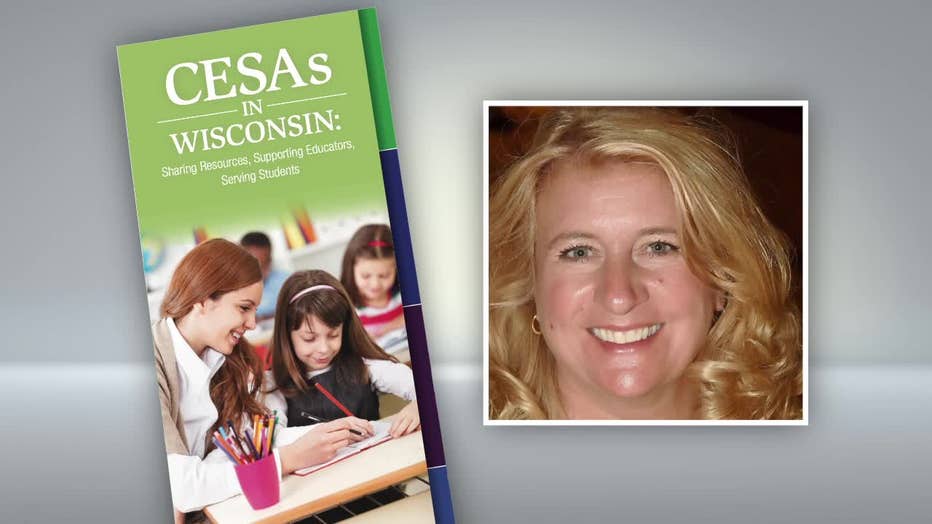 "Things have evolved through a number of meetings," Smits said, "So to go back and say exactly when that conversation took place, I'm not going to be able to. It was a series of three or four."

Erickson said he recalls at least one conversation.

"He had mentioned it to us," Erickson said.

Board member Erin Wilk tells FOX6 News she "was not aware" she was casting a vote to hire the superintendent's wife. The proposal sent for board approval in December merely described "the desired candidate" as "a veteran educator," with no mention of any candidate's name.

But even that is not what upset teachers most. In April, they got a copy of next year's district calendar, which contained a big surprise. Once a month, teachers were scheduled to work evenings making phone calls to parents.

"It did not go over well at all," said one teacher.

"That's what we were told Cindy was hired to do," said another. "That is when things started to get really bad."

Smits explained the calendar the board approved included his personal notes, which teachers were never meant to see.

"It was never my intent to make them work evenings," Smits said.

"I am extremely frustrated," said Gronbeck, who figures the district could have spent pandemic funds to hire more reading specialists, rather than hiring the boss' wife.

"Do you think it was a waste of money?" Polcyn asked.

Gronbeck just wants someone to tell her how the district plans to help her son catch up on all the learning he lost. 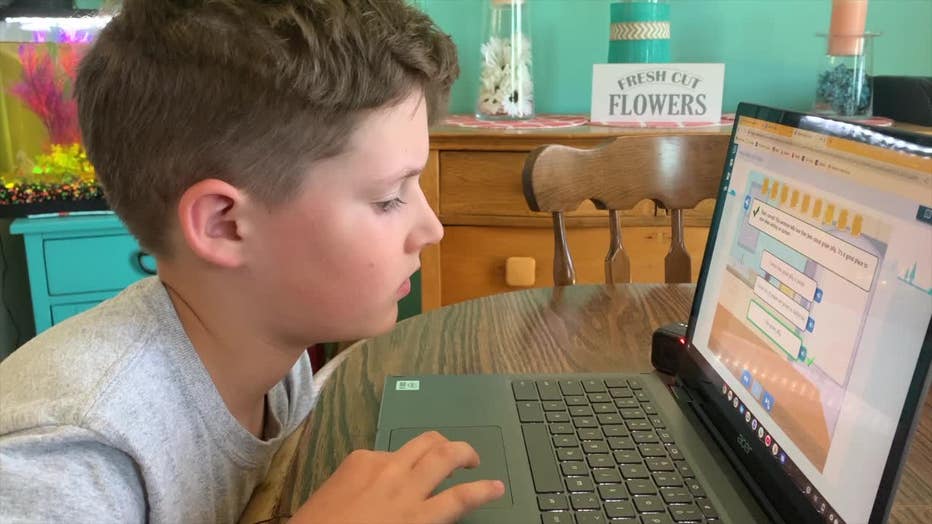 Since FOX6 Investigators started requesting records in April, the Hartford Joint 1 school board has met in closed session three times. Twice, the board met to discuss "the hiring process." Once, it met to approve the minutes of a prior closed session. Mark Smits participated in all three of those meetings.

On June 1, Dr. Smits sent a letter to staff apologizing for "gaps in communication" and promising a review of existing policies. That same day, Board President Greg Erickson sent a letter to families stating Dr. Smits was not involved in his wife's contract negotiations and did not violate any board policies or state statutes.