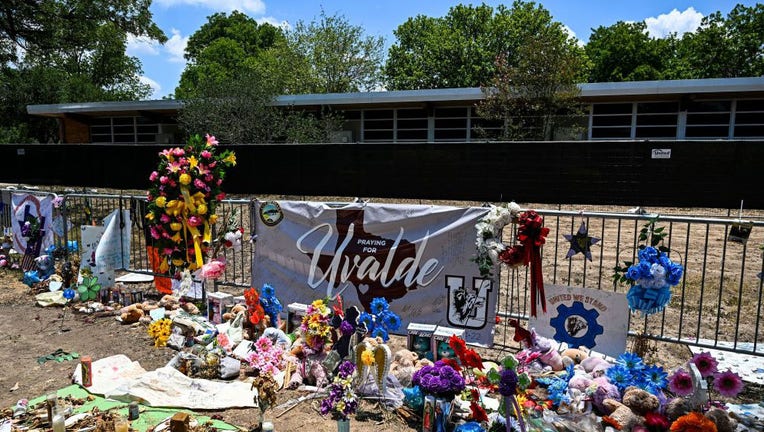 Mementos decorate a makeshift memorial to the victims of a shooting at Robb Elementary School in Uvalde, Texas, on June 30, 2022. (CHANDAN KHANNA/AFP via Getty Images)

AUSTIN, Texas - State and local officials have agreed to release some footage from inside the hallway of Robb Elementary School during the May 24 mass shooting that left 19 students and two teachers dead in Uvalde, Texas, according to multiple media reports Monday.

ABC News reports Monday that the decision to release footage comes after a battle between Uvalde's mayor and the Texas Department of Public Safety regarding how to handle the sensitive nature of the video.

The suspect, Salvador Ramos, entered Robb Elementary School after abandoning his vehicle with a handgun and possibly a rifle. Authorities said that many of the victims were in the second through fourth grades.

Robb Elementary is in a mostly residential neighborhood of modest homes. There is a funeral home across the street from the school.

Uvalde is home to about 16,000 people and is the seat of government for Uvalde County. The town is about 75 miles from the border with Mexico.

On June 21, The Texas Department of Public Safety released a timeline of events around the school shooting.  Texas DPS tweeted out the logs ahead of DPS Director Steve McCraw’s testimony before the Senate Special Committee to Protect All Texans. During the hearing, McCraw called the police response "an abject failure," saying there was enough law enforcement at the scene to stop the gunman within three minutes of him entering the school.

McCraw told the Senate committee that Uvalde ISD Chief Pete Arredondo put the lives of officers above the lives of children.

The chief is quoted in the logs as saying, "We've lost two kids. These walls are thin. If he starts shooting we're going to lose more kids. I hate to say we have to put those to the side right now."

The timeline also quotes Arredondo several times talking about needing a master key and that the doors are locked, preventing them from going into the room with the gunman.

Nearly an hour after Ramos is reported crashing his vehicle into a ditch, the chief is reported saying, "People are going to ask why we're taking so long. We're trying to preserve the rest of the life."

News of footage being released in the Uvalde school shooting comes as President Joe Biden on Monday hailed a new bipartisan law meant to reduce gun violence as "real progress," but said "more has to be done" after just 16 days in effect, that legislation already has been overshadowed by yet another mass shooting.

FOX 32 Chicago, FOX 7 Austin, FOX 26 Houston, and the Associated Press contributed to this story.  This story was reported from Washington, D.C.