Here's what you're going to want to eat and see at Milwaukee's 3rd Street Market Hall.

Here's what you're going to want to eat and see at Milwaukee's 3rd Street Market Hall.

In the 80s, it was a downtown destination. After four and a half years of planning, the 3rd Street Market Hall is set to rise out of the shell of Milwaukee's long-gone Grand Avenue Mall.

"It’s about bringing something to downtown Milwaukee – giving people more of a reason to come down and spend the weekends but also being able to accommodate all the corporate people in the area and people who live here."

Eric Kaye is the project’s general manager. It’s estimated some 4,000 apartments and hotel rooms surround the property, as well as countless offices. Opening Friday with five places to eat, the hall will triple in vendors by April.

"We believe in the project. We think this could be a transformative project."

Places like Dairyland put Wisconsin comfort on the menu:

"We want this to be the one-stop-shop. You have a day in Milwaukee, come here and get your burger, custard, cheese curds." 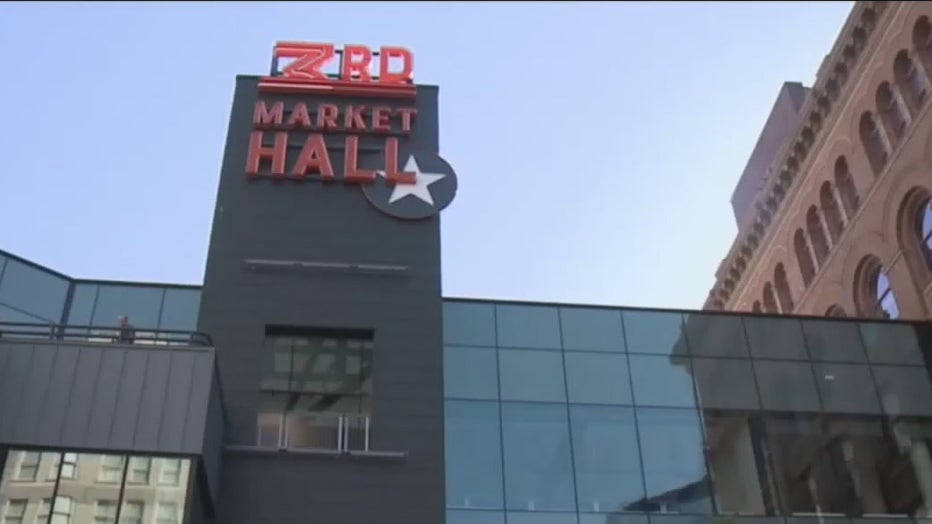 The market will feature vendors like Dawg City, Anytime Arepa, Supernova, and more. The food hall will also feature a 50-seat, full-service bar sure to become a downtown favorite for employees, residents, and visitors alike.

There’s also a feast of entertainment. Games galore: like shuffleboard, bags and golf.

There are lots of unique attractions here, too, like Photoverse – a selfie station location designed by MIAD students.

"Everyone that is from this area has a distinct memory of the Grand Avenue Mall – so I think when people walk in there they will have a lot of memories of what was and what will be," said Kaye.

This is why the mall will soon welcome back a long-time fixture of Grand Avenue Mall:

"I can’t reveal all the details but Professor Stein will make a reappearance here and come back to his original home, yes!" said Kaye.

A nod to the past… while serving up a bright future.

For now, the hall will be closed on Mondays, but by late next month, it will be open seven days a week. Doors open Friday at 11 a.m.

2 crashes on I-43 in Sheboygan County; 4 injured

The Sheboygan County Emergency Communications Center received several 911 calls just after 5:30 a.m. in reference to several vehicles involved in a crash on northbound I-43 near Rowe Road.

A Milwaukee woman, 19, was taken into custody Thursday morning, Jan. 13 after leading Glendale police on a pursuit.