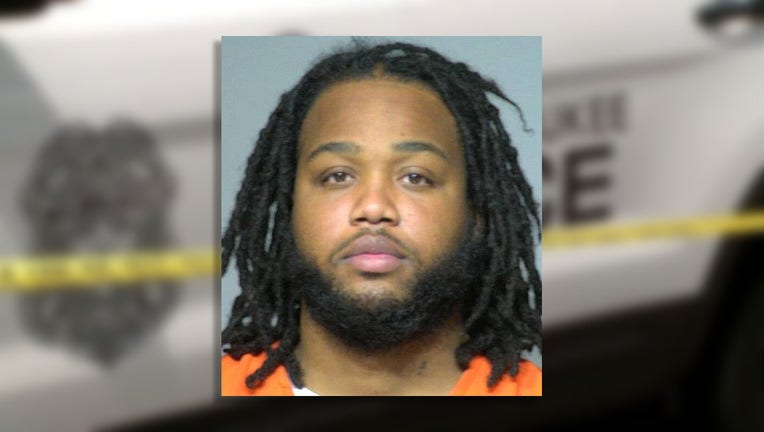 MILWAUKEE - A Milwaukee man has been charged in connection to eight different armed robberies that happened from July through November 2021.

Prosecutors accuse Keenan Knight, 31, of robbing four different businesses – some more than once. He was arrested following a 9.4-mile police chase in December.

Each of the robberies Knight is charged with was captured on surveillance, and multiple parties identified him from the images. Details of each 2021 robbery are as follows, according to a criminal complaint.

July 24, Walgreens near 27th and North: A cashier told police that she saw Knight walk in wearing mask and thought he was going to steal something – "a very common occurrence." The cashier said the suspect pointed a gun at her and said "gimme all the money."

Aug. 1, AutoZone near 25th and North: An employee told police that Knight came up to the register with an item to purchase. Once the register was opened, Knight pointed a gun at the cashier and said not to move.

Nov. 11, Walgreens near 27th and North: A different cashier was working when the third Walgreens robbery took place. The cashier said Knight pointed a gun at his chest and said, "Open the cash register" – later telling a manager, "You not moving fast enough sweetheart." Knight asked the manager "Do you have a gun?"

Nov. 14, AutoZone near 25th and North: A different cashier than the first robbery was working. Knight said he had a gun and twice told the cashier to "open the tray." When that register was out of money, he said "take me to a new register." The cashier said "please don't hurt me, I'm pregnant." Knight then led the cashier to each register until all the money from each of them was taken.

Nov. 18, Family Dollar near 22nd and Center: A cashier said Knight pointed a gun at him and demanded money from the register. Knight then noticed a security guard, the cashier said, and asked if he was armed. When Knight learned that the security guard was armed, he demanded that the security guard walk backward toward him. Knight then took the gun from the guard's holster, and the robbery proceeded. The guard said Knight threatened to "shoot the place up if the cops came." Knight was charged with two armed robbery counts related to this incident.

Nov. 21, McDonald's near 14th and Burnham: An employee said she was working the drive-thru when Knight came behind the counter, armed, and demanded money. The employee said the suspect walked into the back with a manager, where the safe is kept. The manager, gun pointed at her, opened the safe and stepped away, and Knight fled with a bank-issued deposit bag, which was empty.

Nov. 23, AutoZone near 25th and North: A manager said Knight pointed a gun at him and another employee, asking, "Who is the manager?" He then told the manager, "Let's go to the safe." Knight demanded and got cash, but as the two awaited the opening of a separate time-locked safe door, the manager said Knight grew nervous and said: "Everyone is going to be OK as long as no police or customers enter the store, because I'd hate to have to shoot one of you." As in the previous AutoZone robbery, Knight went register-to-register emptying the cash before fleeing.

Knight is charged with nine counts of armed robbery.

Court documents state he was arrested on Dec. 2 after a 9.4-mile police chase after a Family Dollar armed robbery. The pursuit was eventually called off, and Knight was taken into custody. The proceeds stolen from the Family Dollar were found in the car.

Once in custody, a person contacted Milwaukee police to report that Knight had stolen her gun – adding that Knight had just gotten out of jail. The person and a few of the workers identified knight from the surveillance images provided from seven incidents.

As violent crime continues to surge and major elections loom in Wisconsin, we explore the politics of public safety.