Milwaukee Public Schools to get nearly $800M in relief aid

The state of Wisconsin is set to receive more than $2 billion in federal aid for school districts, with more than a third of it going to Milwaukee Public Schools.

MILWAUKEE - The state of Wisconsin is set to receive more than $2 billion in federal aid for school districts, with more than a third of it going to Milwaukee Public Schools.

The largest school district in the state, MPS is set to receive nearly $800 million in COVID-19 relief, which equates to about $11,000 per student.

Other districts, large and small, did not come close to that number, in large part due to a federal formula that takes into account how many low-income students are part of a district.

"We have continuing needs in our districts that go well beyond the pandemic," said Carolyn Stanford Taylor, Wisconsin superintendent of public instruction.

Republican lawmakers question the allocation differences, as some districts continued in-person schooling and others did not.

"Do you feel like the federal government’s allocation is fair in how that money is disbursed?" said State Sen. Dale Kooyenga.

"Being an advocate for all public schools, and all students, we wanted to ensure we could disburse those dollars to other districts that might not have faired so well in that formula," Stanford Taylor said. 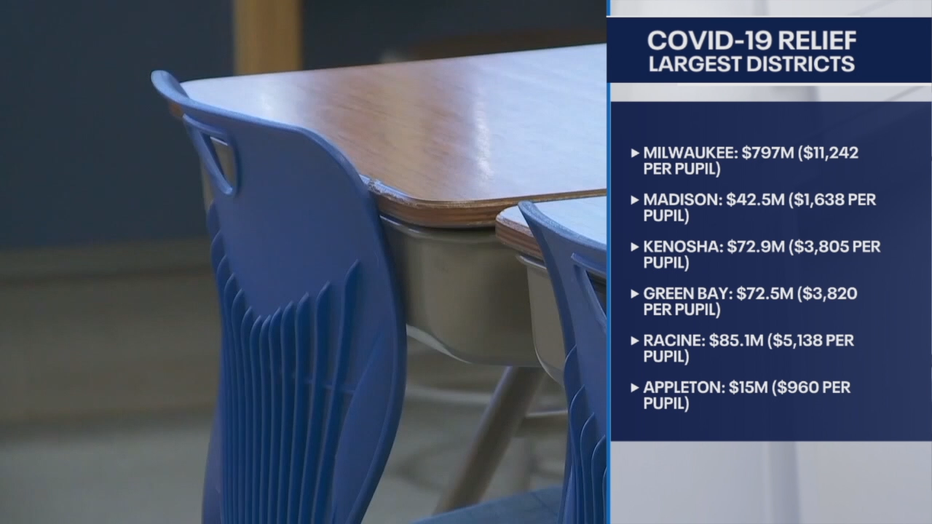 "Can the federal funding be used for something like that, if a school district decides to go to a hybrid calendar to get kids caught up?" State Sen. Jon Erpenbach said.

"Yes, it can," said Stanford Taylor.

Students in Wisconsin are currently back in school or set to return soon, like in Milwaukee. Stanford Taylor said federal law does not require the state to condition the dollars on in-person learning.

So how will that many be spent? MPS has not yet responded to FOX6 News requests. The district will start welcoming back its first students on April 14.

Federal funding determinations by school district can be viewed in the PDF below. If you are having difficulty viewing, CLICK HERE.

MPS: 59% of those surveyed opt for return to classroom

MPS classrooms are limited to between 15 and 18 students upon return. Those who declined, or did not complete the survey, will stay virtual.

Milwaukee County's latest COVID-19 case count shows an average of 117 new infections per day -- nearly a 100% increase over the past three weeks.