Immigrants who have lived and worked in Milwaukee for years said now is the time for immigration reform. They ask that Congress and President Joe Biden hear their call.

MILWAUKEE - Demonstrators took to the streets of Milwaukee on Saturday, May 1, marching to the federal courthouse in an attempt to send a message to Wisconsin's senators.

Immigrants who have lived and worked in Milwaukee for years said now is the time for immigration reform. They ask that Congress and President Joe Biden hear their call.

"Our people have been suffering for too long," said Primitivo Torres, deputy director of Voces de la Frontera. "We want to make sure that we tell Biden the strong message to Republicans and Democrats, that this is our time. This is really the time to stand up for workers and all workers."

"We’re out here today to demand Congress and the Biden administration to follow through with their plans, and to stop deportation and give citizenship for all," said YES! member Katherine Villanueva.

"Right now we’re heading down to the federal courthouse," Torres said. "We are going to give him what is called a 'horse’s (expletive) award."

They left it at the federal courthouse.

"These are people that have been here for 20, 30 years. People who have been the fabric of our society. Who work, and are good, productive members of our society," said Torres. "They deserve this. They deserve to get out of the shadows and start really working as regular Americans."

A few hundred marchers took part Saturday, saying they hope the demonstration will be enough to sway politicians and protect the local undocumented population from the threat of detainment and deportation. 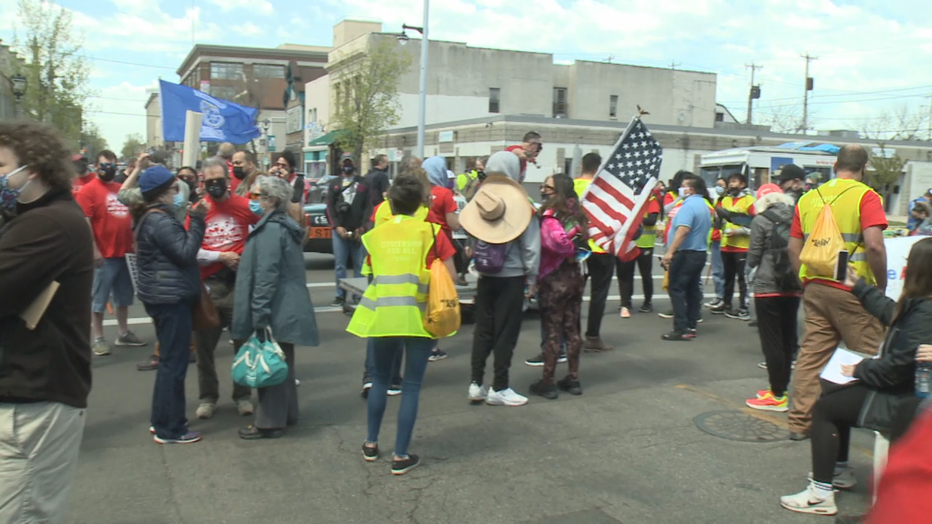 Group marches to the federal courthouse in Milwaukee, calling for immigration reform.

The march also commemorated International Workers Day -- or "May Day" -- a celebration of the working class.

"It’s just a day to commemorate and celebrate labor and workers. The working class. In solidarity. And the workers' movement," said YES! member Gian Marco.

FOX6 News reached out to Sen. Johnson's office, as well as Democratic Sen. Tammy Baldwin's office, for comment but did not immediately hear back.

At Biden's 100-day milestone, most Americans are giving the new president positive marks, polls show. But in a pocket of swing-state Wisconsin, interviews with voters show support often falls short of adulation.