Two people were injured when a city of Milwaukee Department of Public Works (DPW) garbage truck lost control and crashed after a tire blew out near 82nd and Good Hope.

MILWAUKEE - A city of Milwaukee Department of Public Works (DPW) garbage truck lost control and crashed after a tire blew out near 82nd and Good Hope on Tuesday, Sept. 7.

The truck went over the median and struck a curb, causing it to flip on its side. Two people were inside the truck, which happened around 11:30 a.m.

The driver, a 48-year-old Milwaukee man, had to be extricated from the truck by the Milwaukee Fire Department. He appeared to be giving a thumbs-up as he was loaded into an ambulance.

"He was actually stuck, he was stuck in the driver’s seat. His leg was stuck somewhere under the vehicle it was really hard to get him out and a passenger, that was with him, he jumped out just in time. Cause if he didn’t jump out, that truck would be on top of him," said

The passenger, a 27-year-old Milwaukee man, jumped out just as the truck was tipping over – but he got out of the way in time. 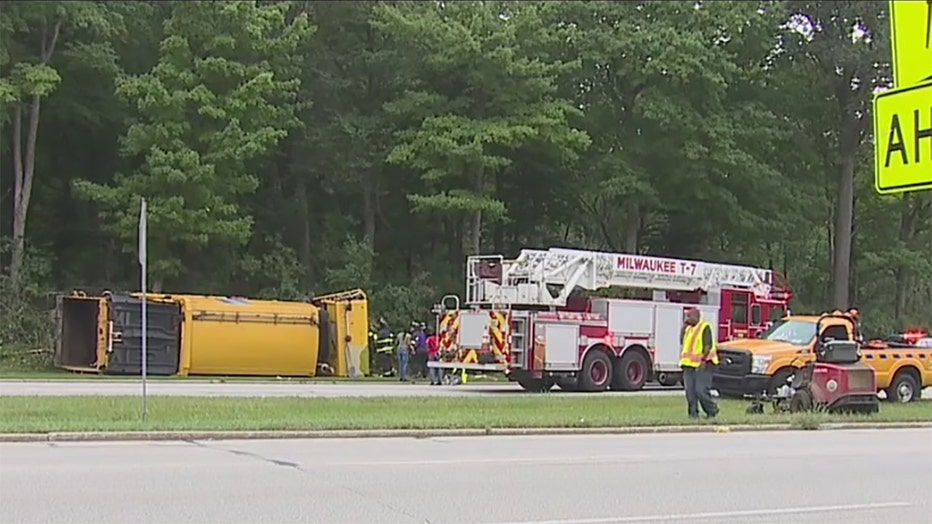 Milwaukee DPW garbage truck tripped on its side after crashing near 82nd and Good Hope.

Both mens' injuries were non-fatal. Both went to the hospital.

Witnesses on the scene called 911. No other vehicles were involved and no one else was injured.

A Port Washington woman was cited for failure to yield the right of way (causing death) in an ultimately fatal crash, the sheriff's office announced.