Milwaukee police said Tuesday the man's death didn't appear to be suspicious. The medical examiner said this was a probable drug overdose.

The death occurred at a growing homeless encampment at the park. The park, in the shadow of the courthouse, Public Safety Building and police headquarters, is no stranger to being a home for the unhoused, but the number of tents has grown.

Named after General Douglas MacArthur, who grew up and lived in Milwaukee, MacArthur Square Park is often home to the unseen. FOX6 noted at least 20 tents in the green space Tuesday, two surrounded by crime scene tape, and a body on the ground.

Milwaukee police said a call came in shortly after 8 a.m. District 1 police and detectives made the short trip from headquarters to the southwest corner of the square. Detectives spoke with several people staying in the square as the body was eventually taken away. 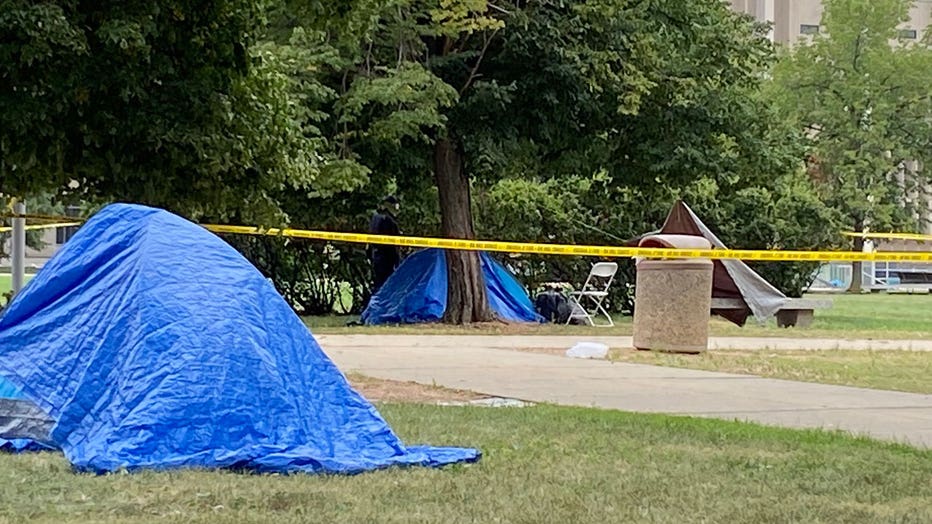 Historically, the unhoused said the green space was a safe place to call home.

In 2019, the Wisconsin DOT evicted those encamped underneath nearby 794 at 6th Street.

While a handful of tents are seen at the square on any given day, the number has grown in recent weeks. Early Tuesday afternoon, an outreach team from the Milwaukee County Housing Division was at the square, speaking with people after this incident occurred.

"Milwaukee County and it's non-profit partners continue to do homeless outreach on a daily basis throughout the community including this location to attempt offer housing and related services. Unfortunately, there are times when individuals are not willing to accept assistance. The County and its partners remain completely committed to the goal of ensuring that unsheltered homelessness is brief and rare whenever possible."