Rev. Jesse Jackson joined pastors to demand an immediate moratorium on Milwaukee asking some churches to pay taxes under threat of foreclosure.

MILWAUKEE - Rev. Jesse Jackson backs Milwaukee pastors in a fight with the city.

"We want our money back. Stop tax and take," Jackson said leading a call and response with others rallying at City Hall.

Some pastors said the city is taxing some of them and then later taking their buildings. Jackson urged a moratorium.

Tipton leads El Bethel Church of God in Christ on Good Hope Road in Milwaukee. That church owns another property at 15th and Ring. The second location had unpaid taxes and went into foreclosure. The city acquired it in March. 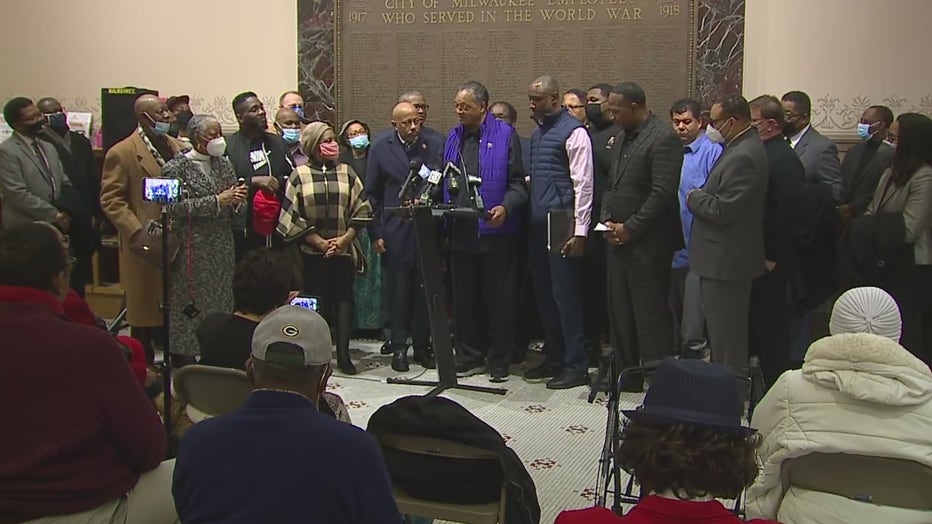 The problem? In order to gain and maintain their tax-exempt status, the church leadership have to fill out a form every two years – attesting they are a church. Without submitting the form, or for other reasons, the city can add them to the property tax rolls.

When taxes are not paid, the city can acquire the church.

Tipton said it is time for the form to go away.

"Every two years the church has to prove that it is a church, that it's worshipping, that should not be the case," Tipton said. "We know about the form, we want the form to be eradicated. We want to be done with the form. Once we fill it out once, we want it to be done, on file."

"How can we change the law so that organizations that are truly tax-exempt but have not filed the necessary paperwork, that they do not lose their tax-exempt status?" Barrett said. "And that, we believe at the city level, may involve a change with state law."

Rev. Jesse Jackson and Operation Rainbow PUSH joined forces with other church groups to demand an immediate moratorium on Milwaukee's demand for churches to pay taxes under threat of foreclosure.

The mayor agreed to contact the city attorney to see if the mayor can unilaterally issue a moratorium on the city taking churches in foreclosure if they have not filed the right form.

"I am satisfied Mayor Barrett will do what he says he'll do. I have high regard for him," Rev. Jackson said.

FOX6 News has asked the city for the numbers of churches which have faced taxes and foreclosures. While we wait for that information, Milwaukee Assessment Commissioner Steve Miner said two church properties were foreclosed in 2020 – but both former owners now have the properties back.

Milwaukee police are investigating a shooting that occurred on Monday, Nov. 29 near 31st Street and Lancaster Avenue.

Milwaukee residents should be aware of winter parking regulations begin on Wednesday, Dec. 1 – and then will be in effect until March 1, 2022.

The Oneida Nation will legally offer sports betting beginning this week, the first time such wagering has been allowed in Wisconsin.