Loved ones identified the woman as Prasanthika Fernando, describing her as intelligent, sweet and caring.

MILWAUKEE - A 22-year-old woman was killed when her vehicle was struck by a semi-truck after it became disabled on I-43 near National Avenue Tuesday morning, June 8.

"It's been very tough," Imasha Perera, the victim's cousin, said.

Loved ones identified the woman to FOX6 News as Prasanthika Fernando, describing her as intelligent, sweet, and caring. Known to friends and family as "Madu," she came to the U.S. from Sri Lanka at age 14.

"Coming to America was the thing she was most proud of," said Aisha Fernando, the victim's cousin.

Fernando attended Brown Deer High School. An aspiring doctor, she graduated from UW-Green Bay in May and was working in the lab of a local hospital – her destination when her vehicle became disabled Tuesday morning.

Relatives tell FOX6 News, that from what they understand, Fernando tried to get to safety, but didn't make it in time.

The crash shut down all southbound lanes of I-43 for several hours.

The Milwaukee County Sheriff’s Office said the victim’s car was initially reported to authorities by a passing driver who almost hit it, warning that eventually, someone would. Soon after, that's exactly what happened.

"I had to swerve to miss hitting it," the caller said. "It’s all black. It’s a black car. No lights on."

A short time later, officials said a semi-truck struck the disabled vehicle and its driver.

"We are unsure if she was thrown from the vehicle or struck by a car," officials said. 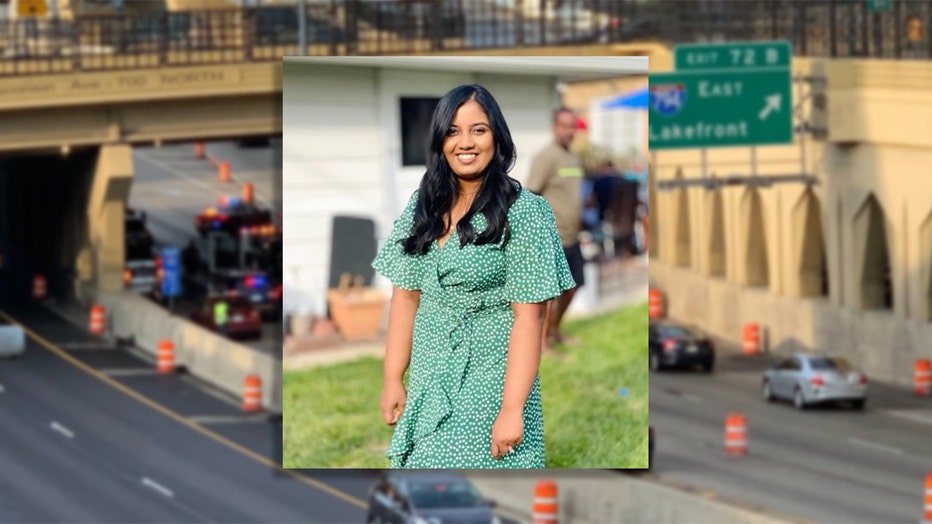 Despite lifesaving measures, the woman was pronounced dead at the scene.

"That’s really sad, and she was just starting off in life – 22 years old," said Tanya Proby.

Proby passed by the crash heading north on her way to work.

"I just want to send my prayers to the family and to the truck driver, as well because a lot of people don’t think about the truck driver," said Proby. "I mean, you can imagine what he’s going through, as well."

The sheriff's office has not said if the truck driver was injured.

Meanwhile, officials are urging other drivers, should they have a disabled vehicle, to remain inside, turn on their hazard lights and call 911.

Loved ones of Fernando have created a GoFundMe account, linked below, to help her family during this difficult time. Fernando is survived by her parents, her sister, and many relatives.