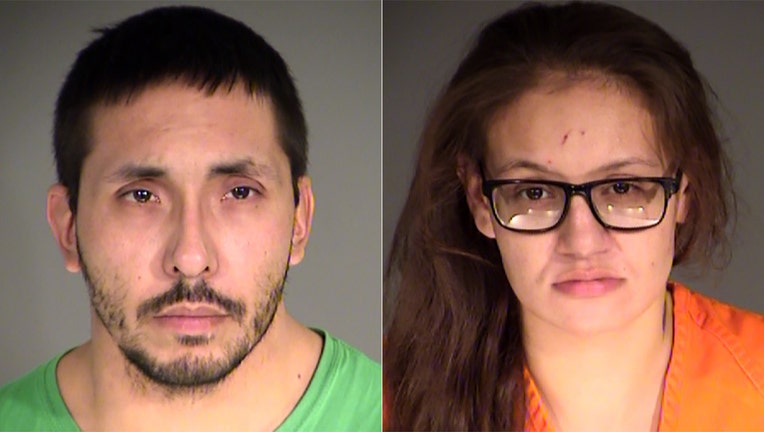 FOND DU LAC, Wis. - A man and woman are charged in Fond du Lac County for allegedly leading deputies on a pursuit that reached speeds in excess of 100 miles per hour on Tuesday, March 9 -- all the while they had a newborn in the vehicle.

The accused are Louis Stone, 34, of Merrill -- and Paulina Meshigaud, 30, of Green Bay. They face the following criminal counts:

According to the criminal complaint, a Fond du Lac County sheriff's deputy was in the Town of Empire on the evening of March 9 when the deputy noticed a car "which appeared to be traveling faster than the posted 55 miles per hour speed limit. A radar reading showed the vehicle was traveling at 93 miles per hour." A traffic stop was initiated.

When the deputy's lights and sirens were activated, the complaint says the car "accelerated, speeding away" from the squad. A pursuit ensued -- and law enforcement noticed the car "traveled multiple times into the oncoming traffic lane, causing oncoming vehicles to veer out of the way to avoid collision." During this pursuit, the complaint says "speeds reached approximately 105 miles per hour."

At one point during the pursuit, the deputy and the car were side-by-side -- and the deputy "saw the male deliberately jerk his steering wheel towards (the deputy), in an attempt to strike the patrol car." At that point, a decision was made to attempt a PIT maneuver -- which caused the car "to spin out into a ditch."

When the deputy approached the car, the complaint says the driver, identified as Stone, got out of the vehicle "with a large butcher knife held to his neck. The defendant yelled, '(expletive kill me! (expletive) do it!" The defendant went back into the car. The complaint says despite multiple commands to drive the knife, Stone refused to do so.

The complaint indicates the deputy noticed a woman, identified later as Meshigaud, and a car seat in the back of the vehicle. When Meshigaud attempted to get out, the complaint says "the defendant grabbed her and pulled her back" into the vehicle. Deputies eventually noted there was a newborn child in the vehicle. The complaint says Stone "continued to ignore commands to get out of the car, often times taking the newborn and holding it while still placing the butcher knife" at his neck. Stone also tried to accelerate the car, "but it was stuck and the acceleration only resulted in spinning tires."

The defendant eventually surrendered to law enforcement and was taken into custody.

Deputies spoke to Meshigaud and she indicated "she tried to get the defendant to pull over, but he would not."

When a deputy questioned Stone, the complaint says he stated "that there were cars following him earlier in the day and he was scared. The defendant eventually acknowledged that the multiple vehicles following him were law enforcement vehicles."

Louis was due in court for his initial appearance on March 18.

Significant changes in Milwaukee's current public health order will go into effect Friday, March 19 -- changes that relax some restrictions in the previous order.

Locust Street Festival canceled for 2nd year in a row

For the second year in a row, the 45th Annual Locust Street Festival of Music & Art has been canceled due to virus concerns.

Law enforcement said on Thursday, March 18 that a motive for a warehouse shooting that left two people dead at the Roundy's Distribution Center in Oconomowoc is not known at this time.