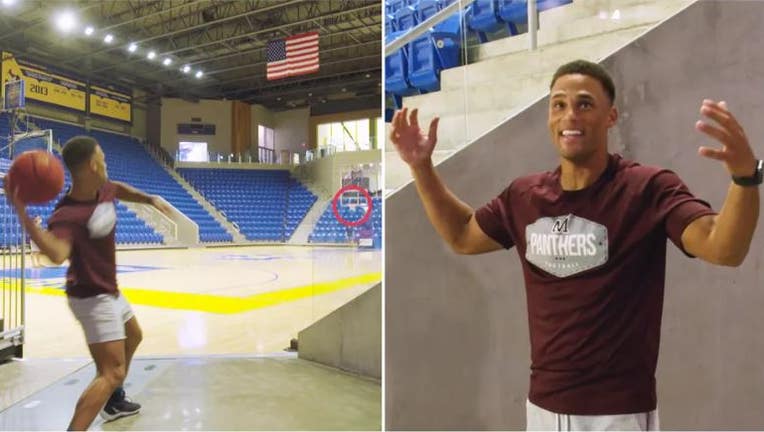 Basketball coach Joshua Walker of Louisiana broke five world records in one day earlier this year. He made one record, the longest basketball shot, from 113 feet, 6 inches away from the basketball hoop. (Guinness World Records)

This basketball coach in Louisiana has quite a lineup of world records.

Joshua Walker broke five world records in one day, including the world record for the longest basketball shot, which he made from 113 feet and 6 inches away from the hoop.

"I just had to give it everything I had and luckily it went in," Walker told GWR after making the longest basketball shot ever.

Walker took the record for the longest basketball shot from Elan Buller, who made a basket from 112 feet, 6 inches back in 2014.

"I literally don’t know how to react."

After making the longest basketball shot, Walker went on to the farthest behind-the-back basketball shot, which he made — after numerous attempts — from a distance of 48 feet, according to GWR.

"I just wanted to get it close to the goal as many times as I could, and eventually one would go in," Walker said.

Walker took that record from Harlem Globetrotter Rock "Wham" Middleton, according to GWR.

Walker’s third record for the day was the farthest basketball hook shot, which he made from 80 feet away from the hoop — which he also took from Middleton.

"That one drove me crazy," Walker told GWR. "It was actually making me mad."

Walker finally made the shot from 95 feet away from the hoop.

He took that world record from another Harlem Globetrotter, Corey "Thunder" Law, according to GWR.

Walker’s final record for the day was the farthest basketball shot made backward, which he achieved from 84 feet.

"It’s a lot of strength to get the ball that far," Walker said about what was required to make the shot.

That record was also taken from Globetrotter Law, GWR reported.

Walker has been playing basketball since he was very young. He told GWR he’s thrilled with his achievements.

"My 8-year-old self would be ecstatic to see that I’m here doing this," he said.