FOX6 News is ''Keeping up with the Joneses'' after the Packers win over the 49ers. Former Packers wide reciever James Jones breaks down the game with Tim Van Vooren.

Rodgers connected on deep shots to Davante Adams and Marquez Valdes-Scantling, and a short toss to Marcedes Lewis in the first half to get the Packers (6-2) out to a 21-3 lead over the Niners (4-5). 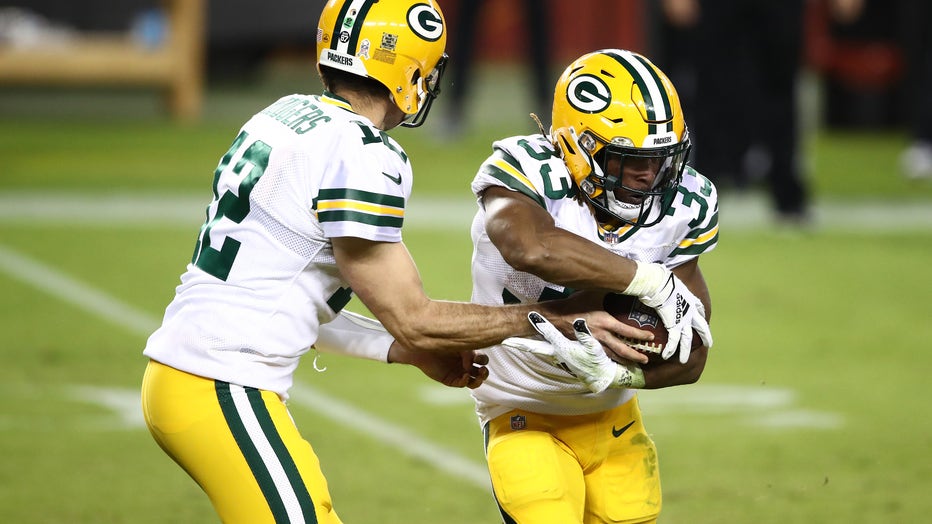 It was quite a reversal from the two meetings last season when San Francisco outscored Green Bay by a combined 50-0 in the first halves on the way to lopsided wins in the regular season and NFC title game.

The rematch looked nothing like those games in part because the Niners were missing almost all their key pieces from the game because of injuries and a positive coronavirus test for receiver Kendrick Bourne that also sidelined three of his teammates for “high risk” contacts.

Rodgers and the Packers, who were missing three players on the COVID-19 list, took advantage of the opportunity.

Rodgers capped the opening drive with a 36-yard shot to Adams, who made an acrobatic catch over Emmanuel Moseley in the end zone for his league-leading eighth TD reception of the season.

Nick Mullens had an apparent TD throw to River Cracraft wiped out on replay for San Francisco and then threw an interception to Raven Greene after backup left tackle Justin Skule got beat for a pressure from Preston Smith.

That mistake led to Rodgers’ 1-yard throw to Lewis and the Packers took control when Valdes-Scantling got behind the defense for the 52-yard catch late in the first half.

Rodgers added a second TD pass to Valdes-Scantling and the rout was on.

Adams finished with 10 catches for 173 yards, making him the first Packers player with three 150-yard receiving games since Donald Driver in 2006.

Rodgers’ TD pass to Adams gave the Packers an opening drive score for the eighth straight game to open the season. The only other team to do that since 2000 was New England in 2007. The Patriots streak stopped after eight games. The Packers have four TDs and four field goals on opening drives for a league-best 40 points.

Packers star running back Aaron Jones returned after missing two games with a calf injury. He made an immediate impact, touching the ball on the first four plays to gain 37 yards. He finished with 15 carries for 58 yards, along with five catches for 21 yards.

The lone bright spot for the 49ers was the performance of receiver Richie James Jr., who had nine catches for 184 yards and a TD. James entered the game with 295 yards receiving in 32 career games.

The run of injuries and coronavirus rules left the 49ers with a shell of a roster, especially on offense. They became the first team since the 1970 merger to play a game without its starting QB and six of its top seven players in yards from scrimmage, outside of the 1987 replacement player games.