In the backyard of his Wauwatosa home, Michael Schultz shows an appreciation for the little things. It includes patio furniture to entertain friends, a smoker to feed them and grass reserved for playing catch with his son, Reed.

WAUWATOSA, Wis. - In the backyard of his Wauwatosa home, Michael Schultz shows an appreciation for the little things. It includes patio furniture to entertain friends, a smoker to feed them and grass reserved for playing catch with his son, Reed.

The space has provided so many memories that have become even sweeter over the last eight months with the benefit of perspective. Schultz was diagnosed with COVID-19 on Dec. 30, forced on life support for 60 days and is still recovering from his battle in the hospital.

That morning, southeastern Wisconsin woke up to a blanket of snowfall, so Schultz fired up his snowblower to clear the driveway.

He also went to clear his neighbor's driveway, but that extra work felt tougher than usual. 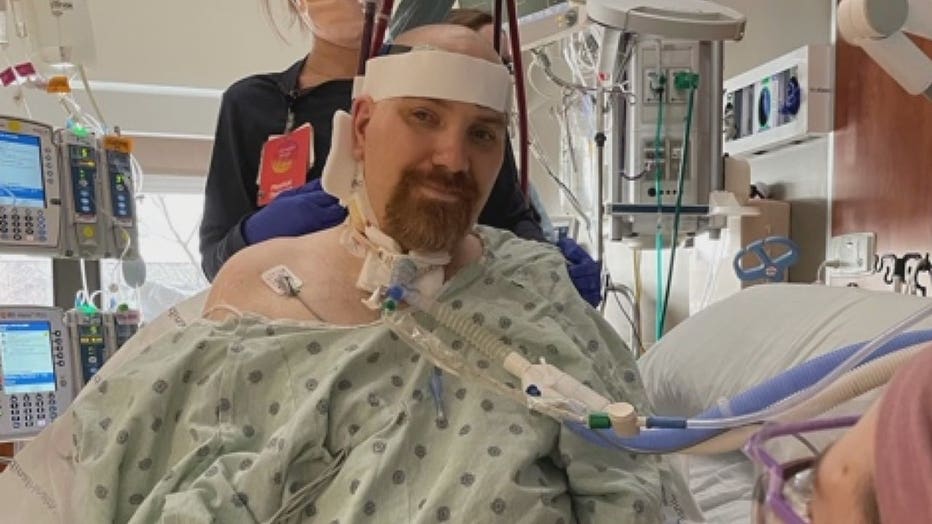 "I just felt like an elephant was sitting on my chest type of thing," Schultz said.

Schultz told his wife, Michelle, and the two agreed he needed to get tested. When the results came back positive, he isolated in the basement, away from Michelle and Reed to protect them from infection.

"We would deliver meals to him and be like, 'OK, stay away.' And he just kinda did his thing down there, and we'd check on him periodically," Michelle said.

In the first few days of isolation, Schultz admitted his symptoms didn't feel much different from a cold. He texted with friends to pass the time.

A week later, on Jan. 6, Michelle noticed her husband had been sleeping most of the day. After conversations with friends, she debated going downstairs to check and see that he was all right, hoping the rest was helping him fend off the virus.

Ultimately, she headed downstairs to check on him. 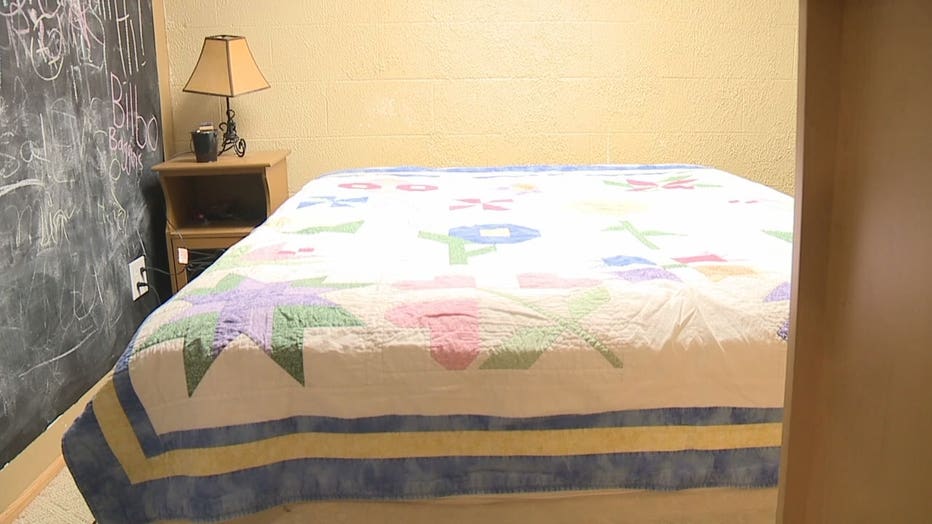 "I went down there, and I was just again trying to be really quiet, 'Hey, wake up.' And then he was making a really funny breathing sound, and I was like, 'Oh, that doesn't sound good,'" Michelle said. "I was like, 'Mike! Mike!' And he wasn't responding."

That prompted a quick discussion on which hospital to go to.

Michelle opted for Froedtert, and that decision would save his life.

Dr. Buck Durham is the extracorporeal membrane oxygenation (ECMO) director at Froedtert and the Medical College of Wisconsin. His team cared for Schultz upon admission.

"We did an echocardiogram to look at his heart very quickly, and it showed that his right heart really wasn't working very well," Durham said.

Designed by Chicago-based Abbott, the CentriMag Acute Circulatory Support system allowed doctors to pump blood out of Schultz's body, remove the carbon dioxide and pump it back in with oxygen.

Schultz was on ECMO for 60 days, until he was wheeled out of the intensive care unit to a standing ovation of doctors, nurses and more in March.

He had to re-learn how to walk, talk and gain his strength back. His therapy was driven by a love for baseball — and a bond shared with Reed. 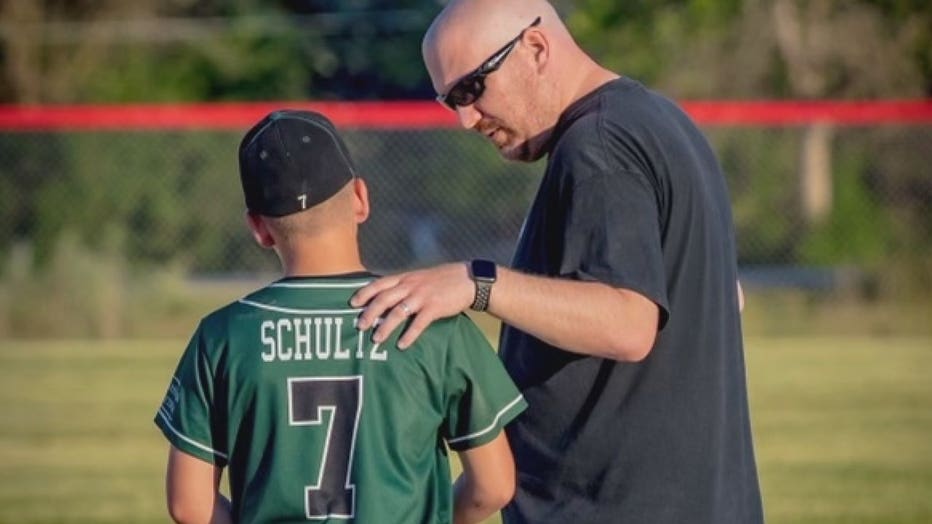 Schultz is the head coach of his son's team, the 11U Tosa West Junior Trojans, and didn't want to miss the season.

"Every day, that was my goal. I'm not missing that game. He's not playing a game without me — those boys aren't," Schultz said.

His nurses would show him videos from players practicing drills ahead of the season, well wishes from friends and family and more to engage him in therapy.

Schultz was vocal about his goal to be out of the hospital before the Junior Trojans' first game on April 16. He made it home April 10, but he wasn't in a position to coach just yet.

In the hospital, his left vocal cord was paralyzed during operations, which weakened his voice. He's now in and out of physical, occupational and speech therapy during the week. Doctors say the strength of his voice could come back in a year or so.

On top of that, Schultz's lungs are now operating at about 55% of their normal function. 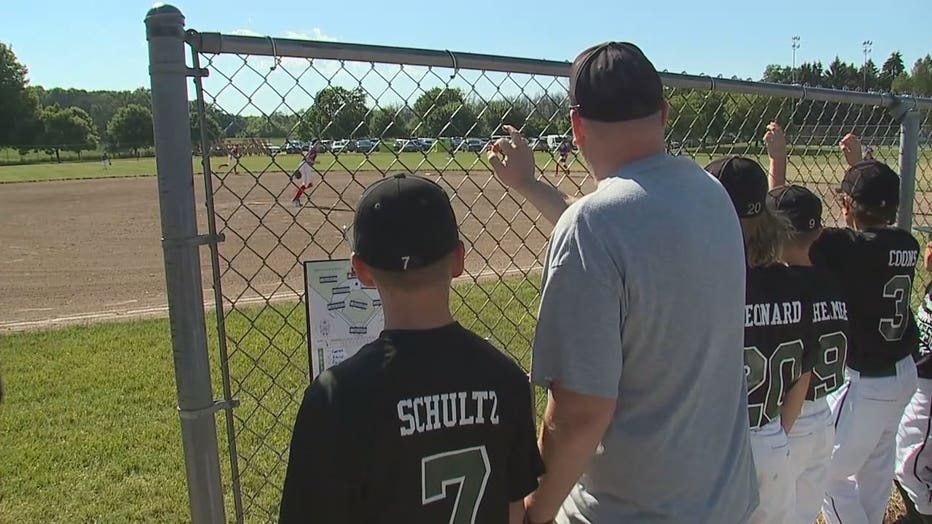 Through the spring, he regained his strength to be able to get back what he loves: coaching Reed and the Junior Trojans. He resumed his role over Father's Day weekend, leading the team to a 2-2 record in a local tournament just three months after he was taken off life support.

But being back in the dugout with friends and players who are like family, living and breathing baseball is as good a medicine as any.

"There were days in the hospital where I didn't think that was gonna be possible. To be back out there now, to be kinda so far removed from those days, just kinda lets me know how lucky I am," Schultz said. "Not only to be alive but to be back out there doing something that I love to do."