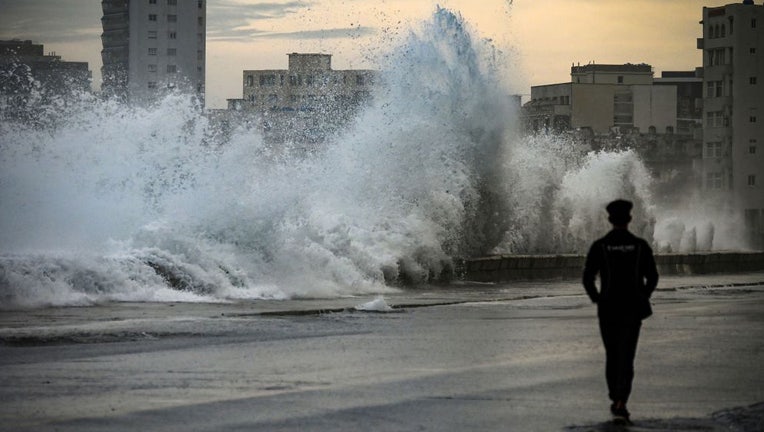 A man walks by the Malecon in Havana, on September 28, 2022, after the passage of hurricane Ian. - Cuba exceeded 12 hours this Wednesday in total blackout with "zero electricity generation" due to failures in the links of the national electrical syst

HAVANA - Cuban officials said they had begun to restore some power Wednesday after Hurricane Ian knocked out electricity to the entire island while devastating some of the country’s most important tobacco farms when it hit the island’s western tip as a major storm.

The Energy and Mines Ministry announced it had restored energy to three regions by activating two large power plants in Felton and Nuevitas and was working to get others back on line.

Lights started to flicker on in the capital, Havana, but much of the city and other parts of western Cuba remained without power on Wednesday in the wake of the major hurricane, which had advanced northward to Florida. It was the first time in memory — perhaps ever — that the whole island had lost power.

On Tuesday, Ian hit a Cuba that has been struggling with an economic crisis and has faced frequent power outages in recent months. It made landfall as a Category 3 storm on the island’s western end, devastating Pinar del Río province, where much of the tobacco used for Cuba’s iconic cigars is grown.

Tens of thousands of people were evacuated and others fled the area ahead of the arrival of Ian, which caused flooding, damaged houses and toppled trees. While state broadcaster Canal Caribe reported two deaths in Pinar del Rio, most other media gave no figures on casualties, saying officials were still calculating the storm's impacts.

"It was apocalyptic, a real disaster," said Hirochi Robaina, owner of the farm that bears his name and that his grandfather made known internationally.

Robaina posted photos on social media of wood-and-thatch roofs smashed to the ground, greenhouses in rubble and wagons overturned.

Cuban President Miguel Díaz-Canel visited the affected region, telling the population, "Although the first impact is very painful, there's nothing to do but overcome the adversity."

RELATED: This is what Hurricane Ian looked like from the International Space Station - 260 miles away

"Being in the hurricane was terrible for me, but we are here alive," said Pinar del Rio resident Yusimí Palacios, who asked authorities for a roof and a mattress.

Officials had set up 55 shelters and took steps to protect crops, especially tobacco.

Ian was even stronger Wednesday as it approached the coast of Florida with top winds of 155 mph (250 kph), threatening to cause catastrophic damage there.

Videos on social media showed downed power lines and cut off roads in the provinces of Pinar del Rio, Artemisa and Mayabeque. A hospital in Pinar del Río was damaged.

"The town is flooded," said farmer Andy Muñoz, 37, who lives in Playa Cajío in Artemisa.

He said many people lost their belongings due to the storm surge.

"I spent the hurricane at home with my husband and the dog. The masonry and zinc roof of the house had just been installed. But the storm tore it down," said Mercedes Valdés, who lives along the highway connecting Pinar del Río to San Juan y Martínez. "We couldn’t rescue our things ... we just ran out."