NEW ORLEANS - Hurricane Ida, now a tropical storm pushing its way inland, made landfall on Sunday in Louisiana as one of the most powerful hurricanes to ever hit the U.S. mainland.

Ida, which arrived on the 16th anniversary of Hurricane Katrina’s landfall, was blamed for at least one death and knocked out power to the entire city of New Orleans and many other customers throughout the region.

Flooding from the storm’s rain and surge threatened hundreds of homes south of New Orleans, and rescue workers set out Monday in hundreds of boats and helicopters to reach people trapped. On social media, people posted their addresses and directed search and rescue teams to their attics or rooftops. 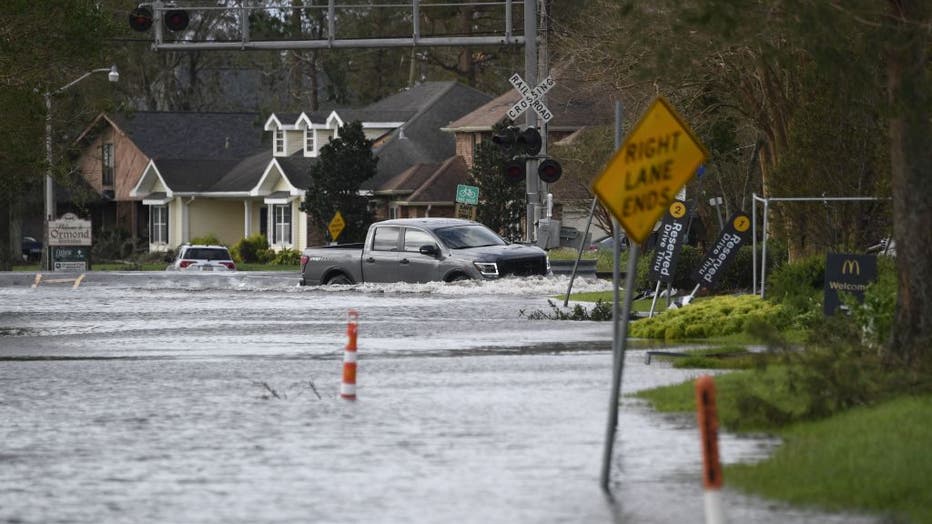 A truck drives through high water near Highway 61 in Destrehan, Louisiana, on Aug. 30, 2021, after Hurricane Ida made landfall. (Photo by PATRICK T. FALLON/AFP via Getty Images)

The storm also blew off roofs, collapsed buildings and even reversed the flow of the Mississippi River as it rushed from the Louisiana coast toward New Orleans.

Overall, more than a million customers in Louisiana and Mississippi were without power, according to PowerOutage.US, which tracks outages nationwide, increasing their vulnerability to flooding and leaving them without air conditioning and refrigeration.

"Tonight, we have confirmed at least one death and sadly, we know there will be others," Louisiana Gov. John Bel Edwards said in a statement late Sunday. "Thousands of our people are without power and there is untold damage to property across the impacted parishes."

Here are some of the various ways to help victims impacted by Hurricane Ida:

The American Red Cross, a nonprofit that responds to both small house fires to multi-state natural disasters, is seeking donations to help victims of Hurricane Ida. Click here to donate online or by calling 1-800-HELP NOW (1-800-435-7669).

The Cajun Navy, a volunteer group that organizes search and rescue teams during disasters, has once again mobilized following Hurricane Ida’s destruction. Those interested can volunteer to help, click here to make a monetary donation or click here to donate supplies.

The Salvation Army provides food, drinks, shelter, emotional and spiritual support, and other emergency services to victims and rescue workers after hurricanes and other catastrophic events. Click here to make a donation to help with disaster relief, which can be selected specifically for Hurricane Ida in the drop-down menu.

Various animal organizations are helping to move animals out of harm’s way. The San Antonio Humane Society helped evacuate pets from the area ahead of the hurricane’s landfall. The Atlanta Humane Society dispatched a disaster response team to New Orleans and Gulfport, Mississippi, to assist the Louisiana SPCA and the Humane Society of South Mississippi in transporting shelter animals.

The Louisiana SPCA is asking for help with its post-storm response, as well as monetary donations.

World Central Kitchen, a nonprofit founded by celebrity chef José Andrés that provides fresh meals to communities in the wake of disasters, has traveled to New Orleans following Hurricane Ida’s landfall. Those interested can make a donation to support the organization here.